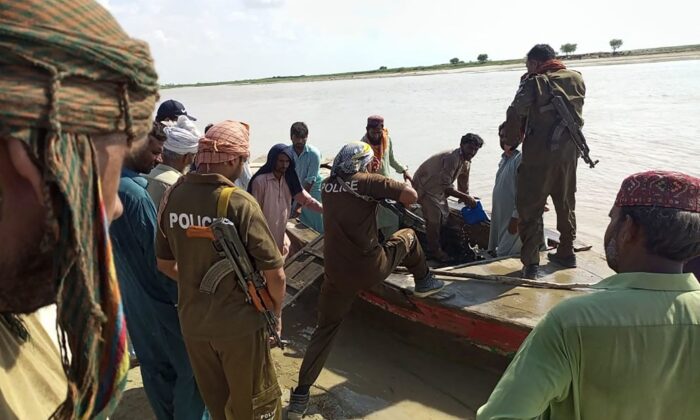 Policemen and local villagers prepare to search for the victims drowned at Indus River after an overcrowded boat carrying a Pakistan wedding party capsized on the outskirt of Sadiqabad town on July 18, 2022. (AFP via Getty Images)

MULTAN, Pakistan—Pakistani rescuers Tuesday resumed a search for 29 people who went missing after a passenger boat carrying nearly 100 members of a wedding party capsized in the fast-flowing Indus river.

Twenty-one women and children were killed in the disaster a day earlier, a senior government official said.

Divers from Pakistan’s army were expected to join the rescue operation in Sadiqabad, a district in the eastern Punjab Province, government official Saleem Assi said.

He said the bodies of 21 people had so far been recovered and handed over to their relatives.

Assi said at least 65 people, including the bridegroom, were rescued on Monday, but 29 people, including children, were still missing. The missing passengers are feared dead. Their relatives are still waiting hopefully along the riverbank to witness the rescue operation.

Assi said at least 90 people were on board the boat when the boat capsized.

Such accidents are common in Pakistan, where rickety wooden boats are often used to transport goods and people on rivers and lakes. Most operate without life jackets.