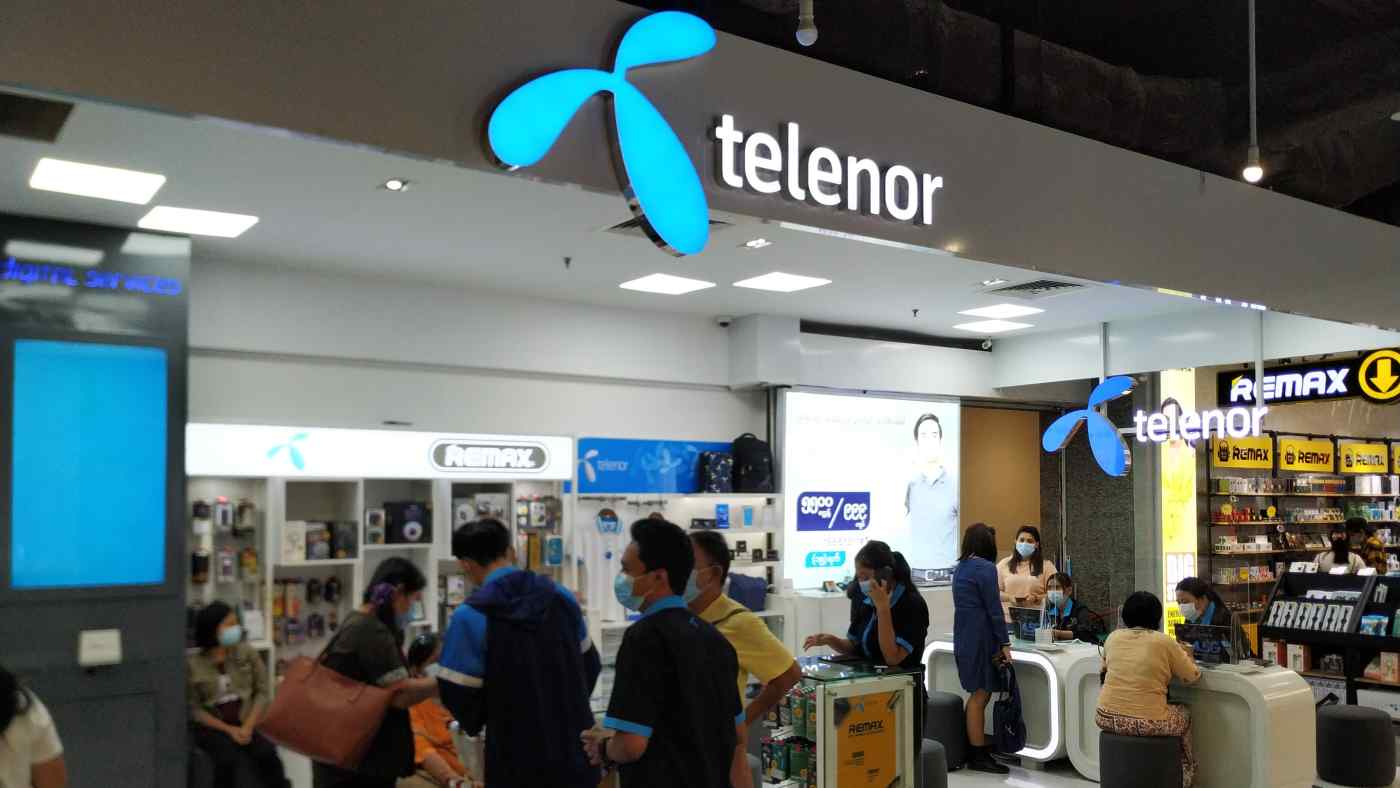 A Telenor Myanmar shop at a mall in Yangon on May 4: The company is the second-largest mobile provider in the country.

YANGON — Norwegian telecommunications company Telenor on Tuesday said it has fully written off its Myanmar operations, at a charge of 6.5 billion krone ($782 million), citing the severe impact of the military coup.

“Due to the worsening of [the] economic and business environment outlook and a deteriorating security and human rights situation, we see limited prospects of improvement going forward,” the company’s CEO Sigve Brekke said at a financial results briefing for the first quarter of 2021.

The company continues to operate in the Southeast Asian country, where it counted 18.2 million subscribers in the quarter. But the military junta’s clampdown on communications has made doing business difficult at best, and the impairment places Telenor among a range of international investors forced to reassess operations there.

The move contributed to the Norwegian group booking a 3.88 billion krone net loss for the first quarter, versus a 698 million krone profit a year earlier.

Telenor is one of the largest foreign investors in Myanmar. According to the country’s top taxpayers list, it led foreign private enterprises in terms of commercial taxes in 2019. Shinsuke Goto, CEO of financial advisory Trust Venture Partners, suggested a company of its stature taking an impairment hit might serve as a cue for its peers.

“The fact that Telenor, which has been steadily expanding its business in Myanmar, has moved to take an impairment loss may cause other foreign companies to follow suit,” Goto predicted.

“Full impairment does not mean that they have given up on Myanmar,” the analyst stressed. “But it means that the company has unburdened itself and is preparing to act with a free hand under this uncertainty.”

The Norwegian company won its license to provide mobile services in Myanmar back in 2013 and launched the business the following year, after the transition to civilian rule in 2011. It ranks as the second-largest mobile operator in the country after the state-owned Myanma Posts and Telecommunications.

The opening of the telecom sector to foreign investors was part of the government’s drive to build the economy. The arrival of the likes of Telenor helped to significantly improve Myanmar’s network.

But Telenor’s announcement on Tuesday was a far cry from the optimism seen in a company news release from 2014, when it spoke of millions of people in Myanmar making a “dramatic leap into a digital future.”

Immediately after taking power in February, the junta began restricting social media access, including Facebook and Twitter. Further, since mid-March, it has implemented all-day mobile internet blackouts. As fixed lines are not common among ordinary households, many Myanmar citizens have lost access to the internet entirely.

“Prolonged mobile internet restriction has severely impacted the people of Myanmar and the economy,” Brekke said. “This is why Telenor repeatedly has called for the network to be kept open.”

According to Telenor’s financial report, subscription and traffic revenues in Myanmar decreased by 19%, hit hard by the data network shutdown.

Operating in Myanmar is “a balancing act with several dilemmas,” Brekke said — from employee safety to the challenge of maintaining operations, coping with network restrictions and upholding belief in freedom of speech.

Despite the “irregular, uncertain, and deeply concerning situation,” however, he vowed to keep Telenor in the country.

“We still believe that we are making a difference when we keep our operations running.”

Where are Japan’s neo banks?