HONG KONG — A nationwide shopping spree has turned the Chinese sportswear maker Erke from an also-ran to one of the hottest brands in the country, highlighting how the trend for “nationalist consumption” has changed China’s retail landscape and put pressure on Western companies.

Erke may not have Li Ning’s daring designs to impress fashion trendsetters in Milan, or Anta Sports’ financial power to acquire big-name foreign brands like Fila and Arc’teryx.

But when it donated 50 million yuan ($7.7 million) in aid to flood-devastated Henan Province in the north last month, it was venerated by internet users as “the light of domestic products,” and people flocked to its stores to snap up everything from sneakers to backpacks.

In just three days, customers bought more than 100 million yuan worth of products through its livestreaming channels on Douyin, the domestic version of TikTok, exceeding its total sales for the whole of the first half of the year. Some tourist attractions in China even waive the tickets of those who wear Erke products. 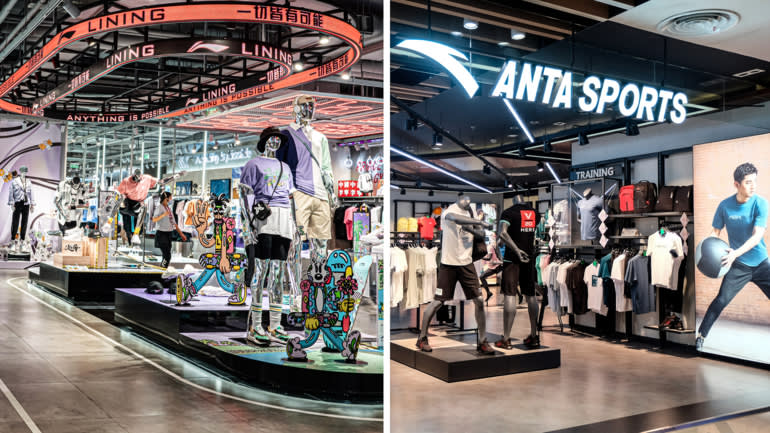 Erke has typically been outshone by rivals, since it does not have Li Ning’s daring designs or Anta Sports’ financial power. (Source photos by AP and Getty Images)

“I am ignited and impressed by what Erke did. It is a brand with a conscience. I can truly feel the strength of our nation, and I really want to support our great national brand,” she said in a video posted on the fashion- and beauty-focused social media platform Xiaohongshu, also known as RED.

It remains to be seen whether the upsurge will last. The 20-year-old brand has often been mocked for tacky designs, and a poorly received rebranding had not previously shown any sign of turning around lukewarm sales.

But the buying frenzy underscores the growing impact that nationalism sentiment is having in shaping the way people shop in China. Unlike older generations, who would save up to buy big-name foreign products for their better quality, younger Chinese are increasingly opting for domestic brands and designs that honor their cultural origin.

“The change of political climate has played an important role in fueling the nationalist consumption trend,” said Ivan Su, an analyst with Morningstar in Hong Kong. He said events such as the U.S.-China trade war and sanctions against Huawei have helped bring some little-noticed homegrown brands to public attention at a time when foreign brands are no longer considered superior.

“Young people in China grow up using these foreign products. There’s nothing too special about them, and they can be more easily substituted out,” Su said.

In March, high-profile Western retailers including H&M, Burberry, Nike and Adidas faced a widespread boycott in China after they spoke out against alleged forced labor in Xinjiang, home to the predominantly Muslim Uyghur people. H&M was among the foreign retailers to face a widespread boycott in China after speaking out against alleged forced labor in Xinjiang.   © Getty Images

On Tmall, China’s largest business-to-consumer online shopping platform, part of Alibaba Group, sales of Anta and Li Ning rose 51.3% and 71.9% respectively in April. Sales of Nike and Adidas fell 58.9% and 79.4%. Both brands lost their endorsement arrangements with Chinese celebrities. While Nike and Adidas narrowed their declines in the following months, the momentum of domestic sportswear sales remained strong.

Racheal Lu, a 21-year-old university student in the northern city of Zhengzhou, was a fan of Nike and Adidas during her teenage years. But now she hesitates to buy their new products, fearing that people would think she is unpatriotic.

“Under the current public opinion environment, if you wear their products, some people would look at you negatively,” Lu said. Instead, she took the chance to explore some of the domestic fashion brands highly recommended on social media, such as Peacebird and Ledin. 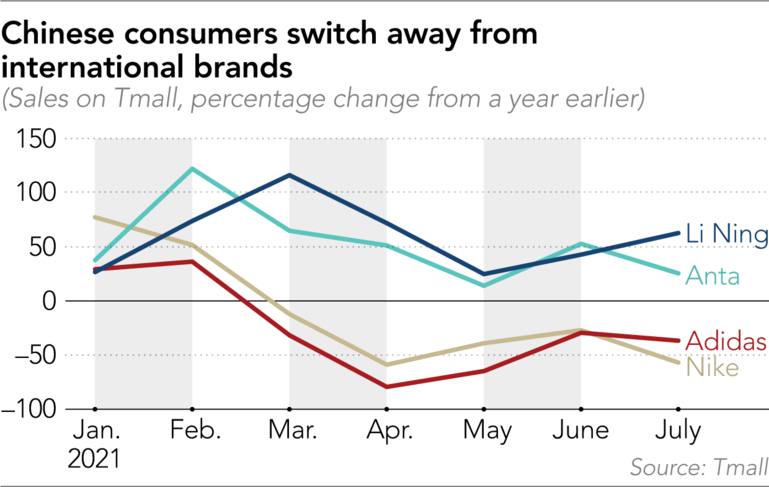 The shift of preferences has given rise to the guochao trend, translated as “China chic,” in which the designs of consumer products feature strong Chinese elements. From ancient patterns that originated in the Tang dynasty to high-tech symbols such as 5G and high-speed rail, icons associated with national pride have been frequently used by domestic brands.

After China landed its first rover on Mars in May, many fashion labels quickly rolled out space-themed products to celebrate the mission. The achievement of China’s national table tennis team during the Olympics in Tokyo also inspired Li Ning to design a T-shirt featuring the idiom “heng sao qian jun,” meaning victory over a thousand armies in a single sweep.

Huang Xiaojing, strategy director and partner at Yang Design, said the purchase decisions of young people are increasingly being driven by curiosity rather than the practical value of a product. “That’s why brands are always seeking to create talking points and initiate discussions with designs that people have not seen before,” she said.

Previously, global brands were the ones to set fashion trends, and local retailers tended to mimic their designs. But Chinese labels accounted for 75% of the most-searched brands on Baidu in the first four months of this year, up from only 45% five years ago, the search engine said in a report. Chinese digital products, apparel and beauty products are among the top three most popular categories. 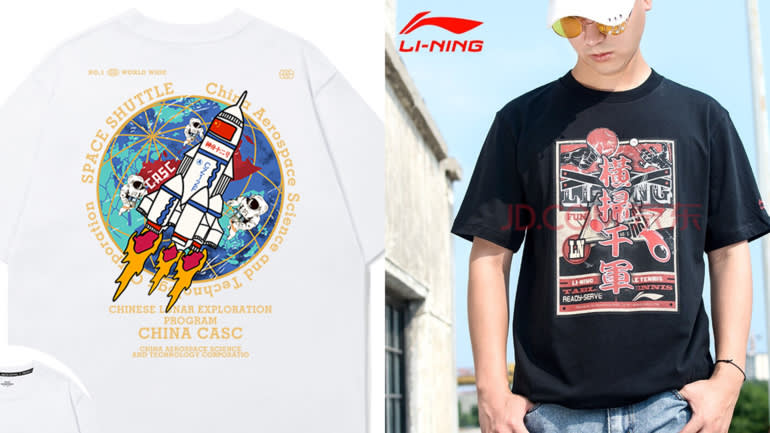 After China landed its first rover on Mars in May, many fashion labels quickly rolled out space-themed products to celebrate the mission. (Screenshot from websites of Taobao)

The progress made by Chinese retailers signals trouble for foreign companies, which count China as a crucial market. Already having to carefully maneuver around a growing list of political and social taboos, from Xinjiang cotton to Hong Kong protests, they will also need to keep up with the fast-changing tastes of young Chinese buyers — and there could be price pressures, too.

Qi Xiayan, a university student from Tianjin, recently ditched her Shu Uemura mascara from Japan and eye shadow from Paris-based Christian Dior. The 21-year-old, who consults beauty bloggers on RED for recommendations, was persuaded into buying replacements from domestic brand Perfect Diary. She paid a total of 140 yuan for the two products, which would otherwise have cost her more than 900 yuan.

“The brand has actually done a great job,” Qi said.

Founded only in 2016, Perfect Diary rose within three years to be China’s third-largest cosmetic brand, trailing only L’Oreal and LVMH, according to data from market research provider Euromonitor. Sales of the Guangzhou-based group surged from only 635 million yuan in 2018 to 5.2 billion yuan in 2020.

Unlike traditional brands, which rely on a sprawling offline network and distributors to boost sales, more than 90% of Perfect Diary’s sales were generated from online channels. 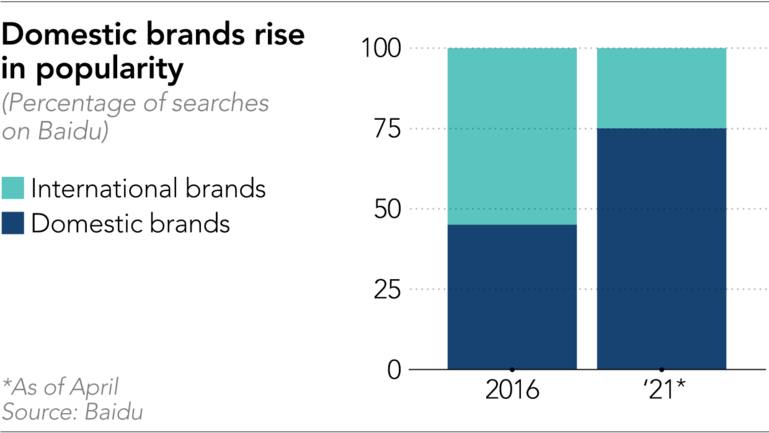 Such digital-first strategies have enabled domestic companies to overtake their bigger foreign rivals. As of 2019, domestic brands had a market share of 46.3% in China’s mass-market and midend beauty segment, up from 24.4% in 2010, and compared with a share of 38.3% for Western brands in 2019, according to China Insights Consultancy.

Such explosive growth would be impossible in the age of traditional commerce, when all the best sales channels were occupied by established brands, said Wang Gao, a professor of marketing at China Europe International Business School in Shanghai. But major e-commerce platforms show strong support for domestic brands. Alibaba’s Taobao, JD.com and Pinduoduo have all launched guochao-themed sales campaigns over the past year.

For international brands, the implication is that they need to go a step further in their localization efforts in China, both in terms of merchandising and marketing, said Pablo Mauron, China managing director at the consultancy Digital Luxury Group.

Prada, for example, recently set up a local team dedicated to social media and digital platforms to be more attentive to what is happening in China. It also hired Cai Xukun, a 23-year-old singer who has more than 30 million followers on Weibo, as its brand ambassador. 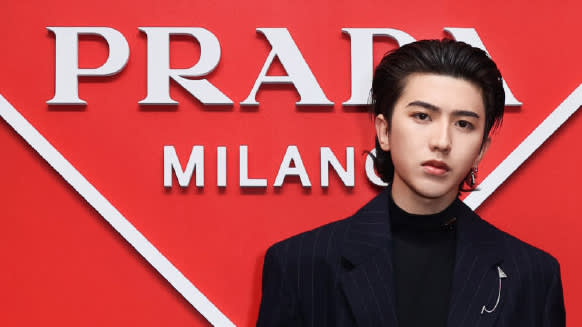 Some Western retailers have tried to incorporate Chinese culture into their products, launching limited editions during major local festivals. But their designs can be viewed as too blunt or even disrespectful.

Burberry faced backlash from internet users when it printed the Chinese character “fu” (prosperity) on its iconic cashmere scarf during the Chinese New Year. Many criticized the design as perfunctory and tacky for a $750 scarf.

Some people also took issue with a bag collection designed by French luxury label Balenciaga during the Qixi Festival, China’s Valentine’s Day, because its embroidered Chinese phrase for “He loves me” mimicked a style preferred by the rural population. Burberry and Balenciaga have both faced a backlash from internet users for the way they have used Chinese phrases on luxury items. (Screenshot from Weibo)

The popularity of gouchao brands is also likely to trigger more skepticism toward Western brands’ sales-boosting Chinese limited editions, according to Mauron.