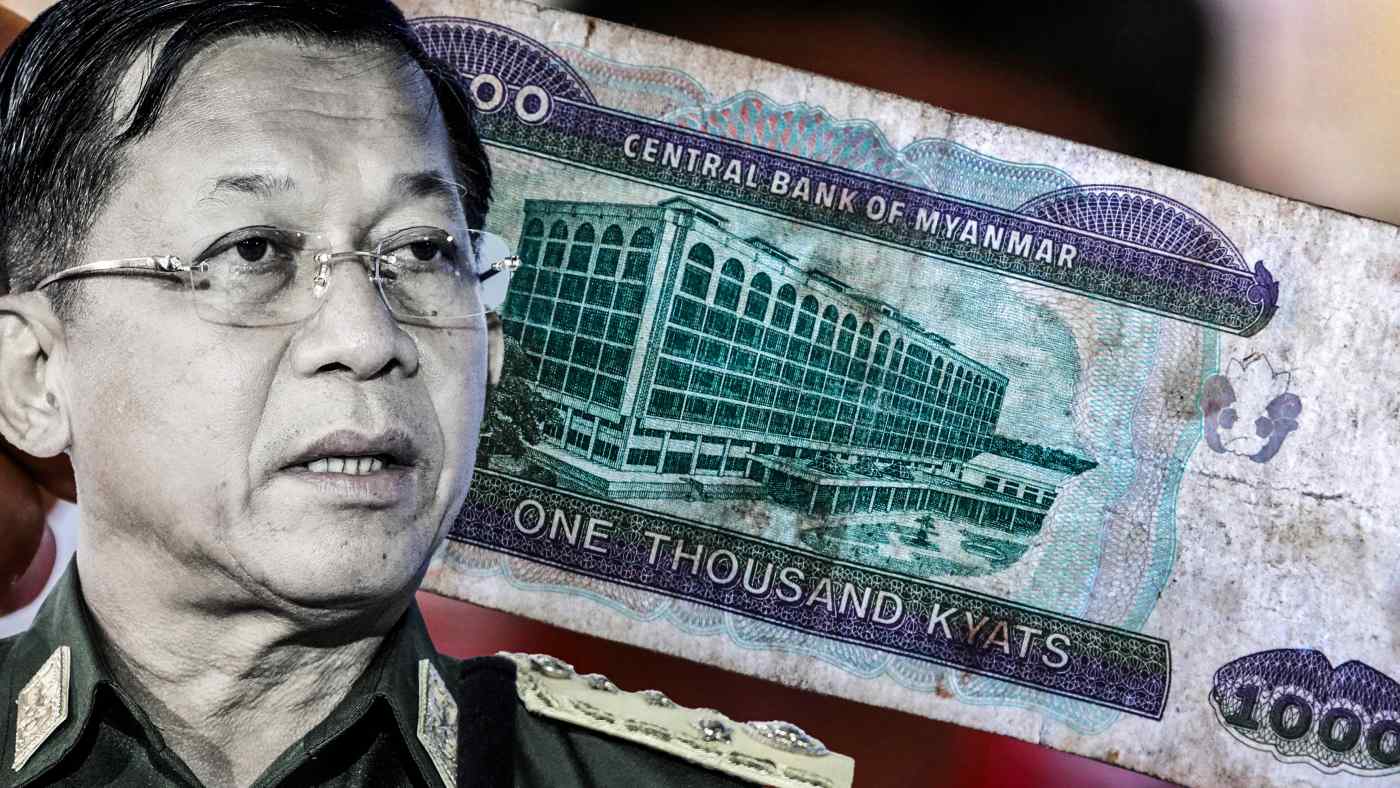 The Central Bank of Myanmar, which is under the military’s control, is wrestling with a steady depreciation of the country’s currency, the kyat. (Source photos by Reuters)

BANGKOK/YANGON — With Myanmar’s currency weakening against the dollar since the military takeover in February, its central bank has reinstated a set exchange rate for the kyat, tightening the regime’s grip over financial transactions.

According to a state-owned newspaper, the Central Bank of Myanmar held an online conference on Aug. 3 and deputy governor Win Thaw said that the regulation — under which banks and money changers have to keep the kyat-dollar rate within 0.8% of a reference rate it sets — is “keep exchange rate stable and commodity prices not to be increased amid the spreading coronavirus infection.” The paper also said the central bank had secured the consent of 44 private banks, including foreign banks.

In addition to the tradable range, the new forex control consists of another pillar: The reference exchange rate, which previously was calculated based on actual currency transactions at private banks, is now fixed at a rate through which the central bank intervenes in the foreign exchange market. This will enable the central bank to manipulate the reference rate without regard to the market rate.

However, amid continuing political instability and rising concerns about dwindling foreign currency revenues, the Myanmar currency’s depreciation in the market is not expected to be curbed. The forex regulation is also widely feared to be likely to widen the gap between the regulated exchange rate and the market rate, which reflects actual conditions, resulting in disruptions to legal transactions and boosting the black market.

The kyat’s reference rate was 1,650 to the dollar on Aug. 13, but its market value fell to around 1,720-1,760 per dollar as of the next day. Money changers have stopped showing their trading rates openly and are evading the regulations by using the telephone and other means. Since early this week, money changers in Yangon stopped selling dollars to customers. Banks are greatly affected by the strengthened regulations because they can transact only within the regulated range. “At a dollar rate weaker than the market value, fewer people will sell dollars they own, and currency transactions could not be conducted at banks,” a person working for a foreign bank said. “Some foreign companies have begun to consider leaving the country, fearing the risk that they would be unable to buy dollars.”

Importers change part of the kyat proceeds they earn into dollars to pay exporters abroad. If they are unable to exchange their kyat at banks, they may fail to pay in time and may default.

Since the military takeover in February, the interbank market has started failing to function properly. Banks have had difficulty procuring dollars and remain unable to process currency transaction orders from customers. Dollar transactions between banks amounted to an average $20.3 million per day in January, but by July the amount was only $3.6 million. 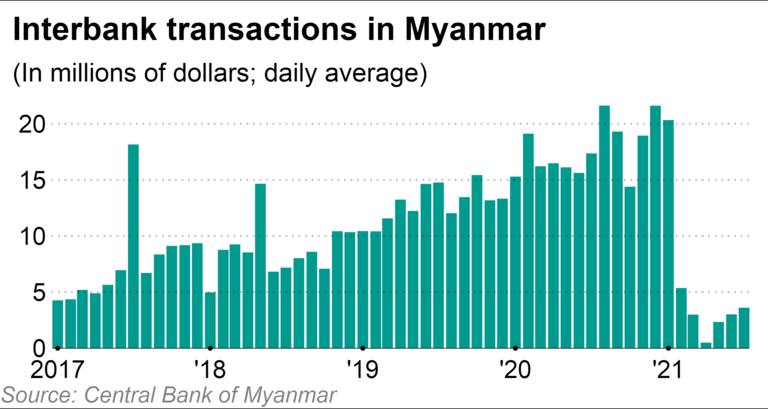 Myanmar modernized its financial system after the shift to civilian rule in 2011, but in addition to the exchange rate controls, there have been other moves to reverse the reforms amid the turmoil since the military takeover.

The central bank on Aug. 2 issued a notification limiting the number of foreign employees at private banks. Banks are only allowed to employ a maximum of 25 foreign staff members each, and are required to ask the authorities’ approval in advance, the notification says. Banks have actively invited foreigners with expertise to work for them to help modernize their financial services, but this will likely be difficult in the future.

The Weird, Winding History of Blue Drinks, a.k.a. the Drinks I Love Most

Benjamin Glynn, convicted of mask offences, deported to the UK