BANGKOK — Along its border with Myanmar, China is taking a stab at containing the spread of COVID-19 by ramping up ties with armed groups operating in rural ethnic enclaves, completely ignoring the military regime in Myanmar.

The Kachin Independence Army, Shan State Army-North and United Wa State Army — the largest of Myanmar’s rebel forces — have become conduits for doses of Chinese-made COVID-19 vaccines, bolstering alliances that Beijing has cultivated in a corner of Southeast Asia that is strategically important to Yunnan Province in China’s southwest.

“We have vaccinated 20,000 people … [and] more than 10,000 have already received both doses,” said Col. Naw Bu, head of news and information for the Kachin Independence Organization, the political wing of KIA, in comments to Nikkei Asia. “We plan to vaccinate around 40,000 people, including the internally displaced, in our KIO-controlled area.”

China’s Red Cross, he said, was the supplier of the Sinovac vaccine to the KIO-held area in Myanmar’s northern Kachin state, where clashes between the KIA and Myanmar’s military have intensified since February, when the military seized power.

In July, over 700 COVID cases were detected in KIO territory, including a large cluster in Laiza, the mountainous capital of the rebels. 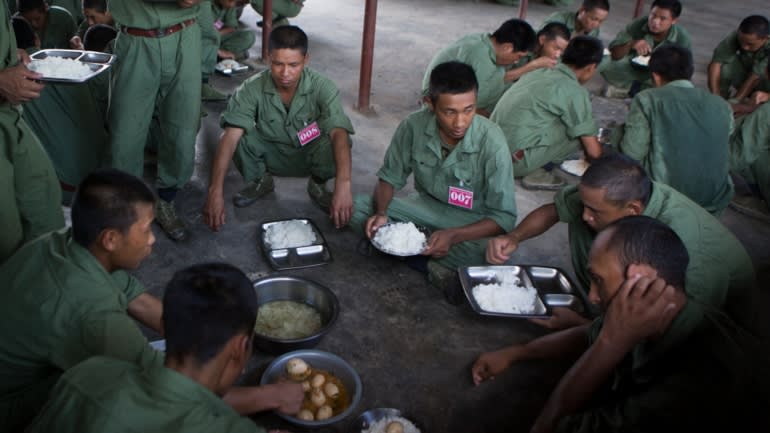 Col. Sai Phone Han of the Shan State Progressive Party, the political wing of the SSA-N, said the rebel army has enforced quarantines and travel bans to contain the viral spread. “There are COVID-19 infections in urban areas but not much in rural areas,” he told Nikkei, referring to pockets in Myanmar’s eastern Shan state. “We have inoculated more than 3,000 people in the area.”

China’s intervention comes as Myanmar’s rapidly rising COVID-19 infections trigger alarms in the region. By Aug. 5, Myanmar had recorded 320,000 cases and 11,000 deaths, according to the World Health Organization. The daily death toll from COVID-19 in a country of 54 million had climbed to 300 by Aug. 11, according to an official tally.

Air China landed in late July at Yangon International Airport carrying COVID-19 vaccines for central Myanmar, where the military regime has maintained an iron grip since February. Under its vaccine diplomacy, China has agreed to supply three million doses to Myanmar — two million of the Sinopharm jab that was donated free and one million of the Sinovac jab that Myanmar purchased. 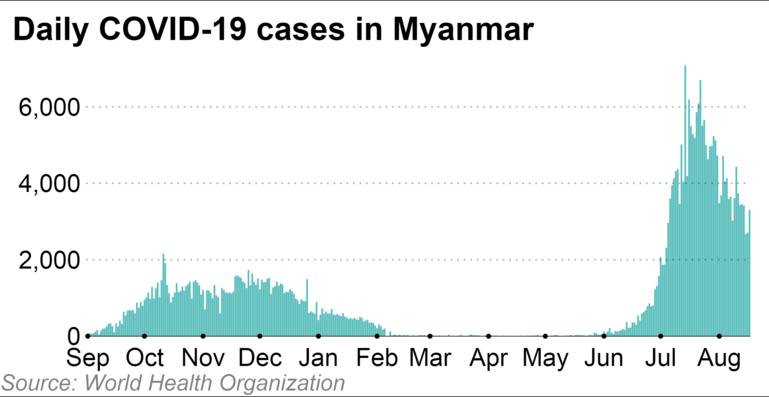 Myanmar’s military regime has exacerbated the COVID crisis by harassing health care workers who have protested the military’s power grab. According to reports compiled by U.S.-based Johns Hopkins University Center for Public Health and Human Rights and global rights campaigner Physicians for Human Rights, the crackdown by the regime has resulted in the deaths of 25 health workers, 37 injured and 190 arrested by the end of July, putting Myanmar’s COVID-19 response “on life support.”

Not surprisingly, China has been rattled by reports of the pandemic spilling over into Yunnan, where clusters in the small border towns of Ruili and Longchuan have contributed to a surge in “imported infections,” according to media reports. This has prompted Zong Guoying, Yunnan’s vice-governor, to declare plans to build a “fortress of iron” to stamp out cross-border transmissions, according to media reports.

Beijing has long pushed for more stringent security by reinforcing a fence to stop people from crossing the 2,227-km border. Dubbed by some as the “Southern Great Wall,” work has been ongoing along the international border at China’s behest to raise the fence to 3 meters, wrap it in barbed wire, and install modern surveillance systems. The Myanmar regime has reportedly little to say in this unilateral effort by China, despite both countries having signed a 1961 border demarcation treaty.

Regional analysts reckon that China’s two-pronged approach — closing the border to stop crossings and supplying vaccines directly to ethnic armies — reflects Beijing’s anxiety about COVID-19 morphing into a national security threat in Yunnan. “All officials across Yunnan have been told it is a priority to stop COVID from spreading, so it is at the highest level of alert,” said Jason Tower, Myanmar country director at the United States Institute of Peace, a think tank. “They are deploying a significant number of border patrol resources to keep people out.”

The new security measures at the border are extreme, according to Tower, compared with previous Chinese interventions to protect its turf. “Large stretches of the fence are very high, with CCTV cameras and AI monitoring,” he said. “The Chinese see this as a national security threat and Beijing has given strong support to authorities in Yunnan to stop the virus spreading.” China has also forced the closure of the busiest border-trade town of Muse in Myanmar. “No goods or people are allowed to cross, and they only allow COVID-19 related items such as oxygen concentrators and cylinders,” said a 43-year-old businessman, who runs a logistics company in Myanmar. “We were told by the officials that the border gates were closed because they want to control the outbreak.”

In a move to calm Beijing’s nerves, the United Wa State Army — comprised of an estimated 25,000 well-trained and well-armed troops — has taken the hardest line among the rebel armies, threatening residents with death if those infected with coronavirus are nabbed crossing into China. The UWSA’s announcement last week came in the wake of growing anxiety in Yunnan, where a COVID-19 outbreak of the highly contagious delta strain has been reported since early July.

Under its “rules about punishment on illegal travelers and those who helped them,” the UWSA’s COVID-19 Protection and Prevention Central Committee warned residents in its fiefdom of five activities carrying stiff penalties. “If [one] assists a person to illegally enter into the Wa State or China, he or she will be fined for the full amount of the money that is confiscated from him/her, and there will be 3-5 years of imprisonment” was the first of the rules.

The last threatened violators with a life sentence or death.

Afghanistan collapse a failure of execution, not strategy