Multipurpose marijuana could light up another economic engine for Thailand 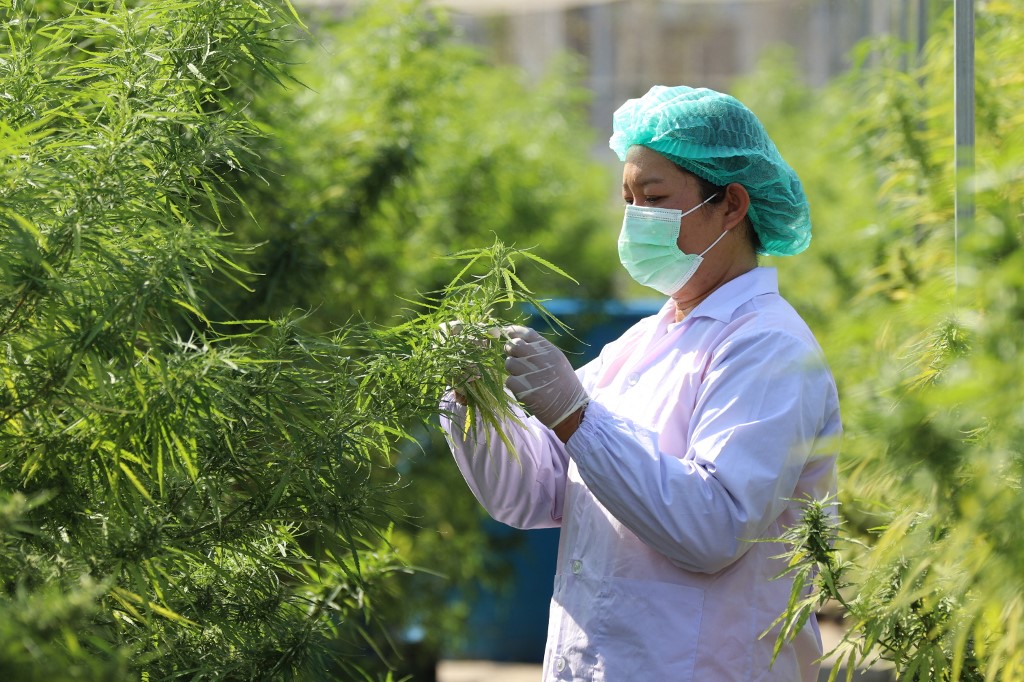 Marijuana could generate up to Bt8 billion for Thailand’s pharmaceutical industry over the next five years, but farmers stand to make little from growing the herb, experts say.

Individuals are still prohibited from growing marijuana for sale, though universities, community enterprises, medical professionals and traditional medicine practitioners can seek a licence to grow it commercially.

Ravissa led a study titled “Economic Impact of Commercialised Cannabis Cultivation in Thailand”, which was funded by the Thailand Science Research and Innovation (TSRI) and covered both traditional and modern medicine.

Two natural compounds found in plants of the cannabis genus, cannabidiol (CBD) and tetrahydrocannabinol (THC), are used in both traditional and modern medicine.

THC produces a sense of euphoria (a “high”), while CBD has been shown to help patients suffering from anxiety, depression and seizures.

In Thailand, cannabis-based medication is used for palliative care of cancer patients, not as a cure for disease, said Ravissa, adding that almost 1 million (996,743) patients are believed to have taken marijuana-based medicines in Thailand last year.

February 19, 2021 The Plao-Ploen herbal development center in BuriRam province is the first community enterprise selected by the GPO. Thai law does not permit individuals to cultivate cannabis so, in order to grow cannabis legally, farmers have to form a community enterprise.

If average per-person consumption rises to 240 grams per year, the value will grow as high as Bt8 billion by 2025.

The market value of traditional cannabis-based medicines is far lower, estimated at about Bt10.4 million last year. It is forecast to grow by about 30 per cent annually, reaching Bt38 million in the next five years.

Just under 700 kilograms of marijuana priced at Bt15 per gram was used in traditional medicines last year.

In comparison, up to 2.2 tonnes of marijuana was used in modern medicines last year, and that figure is expected to rise to 10.8 tonnes in 2025.

“Based on these estimates, we will only need a relatively small plantation area of about 19 rai [3.04 hectares] to meet the demand for marijuana in the pharmaceutical and traditional medication industry,” Ravissa said.

That would mean farmers stand to gain little from cultivating marijuana for medical use.

However, this study does not cover the use of cannabis-hemp in food products or in the textile industry.

“Globally, the recreational use of marijuana has risen a lot faster than pharmaceutical use, so the prospect of exporting marijuana-based medicines from Thailand is still a long way off,” Ravissa added.

“We grabbed the chance to educate the public about cannabis consumption and other related facts, ” she sa ys . The Narcotics Act of B.E. 2522 that identified cannabis as an illegal substance in 1979 put Thailand behind many nations in term s of research into breeding varieties for health use.

Somporn Isvilanonda, a senior fellow at the Knowledge Network Institute of Thailand, agrees that both cannabis and hemp have the potential to become cash crops.

If the stems and leaves of the cannabis plant can be used as an ingredient in food and beverages, then the potential of marijuana as a cash crop will rise further.

Investors have recently shown interest in buying shares in Thai corporations that are expected to use oil from hemp-cannabis plants in their products, including Charoen Pokphand Foods, Carabao Group, T.A.C. Consumer, Osostspa and Ichitan.

Hemp also has great potential in the textile industry, especially since its fibre has been  used to make cloth in Thailand.

Viroj Na Ranong, research director at Thailand Research Development, however, has doubts about the money-spinning potential of cannabis.

“At this point, we are not sure about how many diseases cannabis can treat. As far as I know, it can only be used to help people ‘feel good’, plus it can also become addictive,” he argued, adding that politicians may be exaggerating the benefits of marijuana to win votes.