“Pay by biometrics.” Don’t tell me what to do.

Your Still-Very-Stranded-In-Tbilisi Correspondent mused at the end of June that the West’s never-ending barrage of sanctions might disrupt digital cattle-tagging efforts in Russia.

This is probably true in “backwards” regions that can’t boast a single Smart or Safe City—how embarrassing.

But it is definitely not true in Moscow, which is lorded over by a dancing Boston Dynamics robot named Sergey Sobyanin. 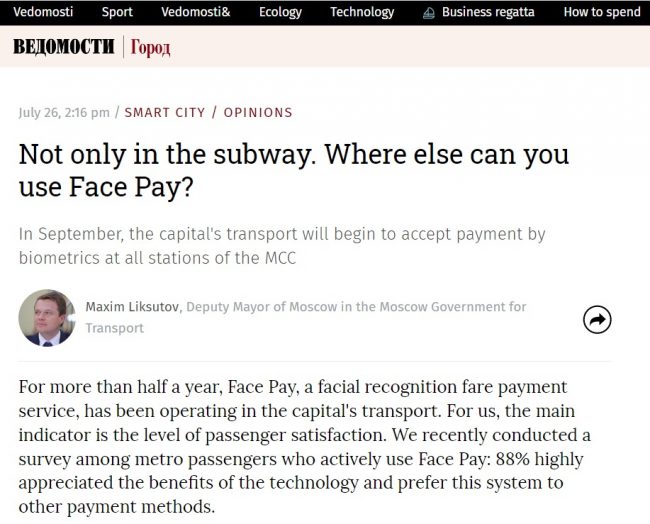 “What is Face Pay?” maybe you are asking.

It’s when you pay with your face.

What kind of feedback has Sobyanin’s safe and convenient payment method received, according to trustworthy and reliable data cited by Moscow City Hall?

As Liksutov explained in his recent op-ed for Vedomosti, Muscovites love Face Pay, because it’s safe and convenient.

Liksutov understands their cravings; he has the medicine:

Among the disadvantages that we still need to work on, passengers indicated a small number of turnstiles that can be passed through using biometrics. Most stations have 1-2 Face Pay turnstiles installed, at some stations we have already increased their number at the request of users… [A]fter updating the turnstiles in the metro, at least 200 more will be able to accept payment by biometrics. If necessary, we will further increase the number of such turnstiles.

We know what you are thinking: can my small child also pay with his or her face?

Sure, why not? Probably soon:

Passengers are asking to implement Face Pay passes on social cards, including for students and schoolchildren—we are discussing and evaluating this possibility.

Maybe some of you feel uncomfortable about transitioning into a payment system that automatically deducts digital rubles from your Sber account when a camera recognizes your face? But why would this bother you? China is already doing it—and Russia is doing it better, according to Liksutov:

Facial recognition fare collection system is being implemented in China, but we are ahead… Face Pay has been tested on local self-driving buses. Moscow is the first city in the world where the facial recognition system for fare payment works on a large scale. The service is available at all 250 metro stations, as well as at the Kutuzovskaya station of the MCC.

Did we mention that Face Pay is “safer and more reliable than paying with a bank card,” and is also very, very convenient? Sergey Sobyanin is committed to making sure every Muscovites is safe and forever-free from being inconvenienced:

Payment by biometrics in the Moscow metro, launched on behalf of Moscow Mayor Sergey Sobyanin, is an important stage in the development of our ticketing system and a convenient way for passengers to pay for travel, which we will continue to develop.

According to local media reports, Moscow City Hall has been flooded with Thank You cards. As Katyusha.org wrote, every patriotic Russian supports the ongoing construction of “a biometric concentration camp in Moscow.”

There will never be a point in time when not-paying-with-your-face will be discontinued, due to being unsafe and inconvenient.

That will never happen.

Riley Waggaman is your humble Moscow correspondent. He worked for RT, Press TV, Russia Insider, yadda yadda. In his youth, he attended a White House lawn party where he asked Barack Obama if imprisoned whistleblower Bradley Manning (Chelsea was still a boy back then) “had a good Easter.” Good times good times. You can subscribe to his Substack here, or follow him on twitter or Telegram.