For vaccine production in Japan, there is a possibility that Moderna will seek consignment contracts or license agreements with Japanese companies.   © Reuters

NEW YORK — Moderna is considering manufacturing its coronavirus vaccine in Japan, with chief executive Stephane Bancel telling Nikkei in a phone interview, “We’re having discussions in several countries in Asia, including Japan.”

The news comes soon after the Japanese health ministry officially approved the manufacture and sale of the vaccines developed by Moderna and AstraZeneca on Friday.

For production in Japan, there is a possibility that Moderna will seek production contracts or license agreements with Japanese companies. Bancel said that discussions are still in the early stages but that his company is in talks with several Japanese entities. He said Moderna is very interested in expanding its business and production in Asia, adding that he understands that Japan has a high-quality labor force as well as research capabilities.

The chief executive welcomed the vaccine approval before the 2020 Tokyo Olympics, due to start in about two months. “We are very excited because there is the Olympics and there is a lot of people to protect in Japan,” he said.

“We don’t have precise efficacy because the study was too small,” he said. However, Bancel expressed that trials in Japan have shown sufficient efficacy, adding that “What I can tell you is that all of our study participants made a very high developed neutralizing antibody, like we saw in America.” 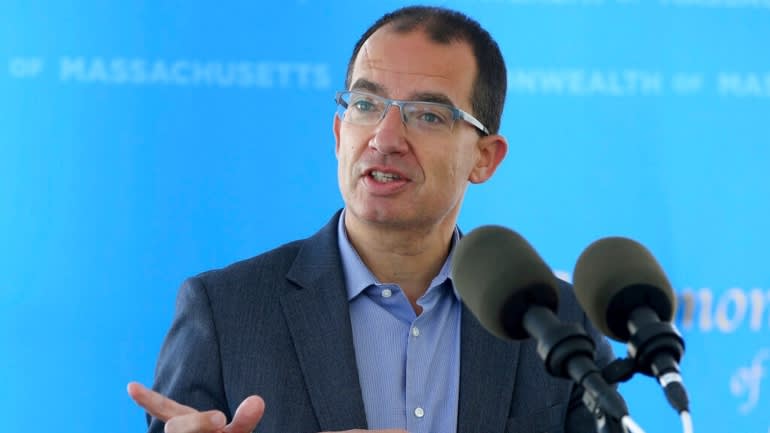 Stephane Bancel, CEO of Moderna, speaks to the media after Massachusetts Gov. Charlie Baker toured the Moderna facility on May 12.    © AP

Japan has already started importing Moderna’s COVID-19 vaccine from its production site in Europe. The vaccine is expected to be used at large-scale inoculation sites in Tokyo and Osaka that will be operated by the Self-Defense Forces and are set to open next week. The vaccine will also be used at other large vaccination sites that will be set up independently by prefectures and ordinance-designated cities.

The Japanese government has made a contract with Moderna and is set to receive 50 million doses by September. Bancel said the company is in discussions with Japan regarding additional supplies for next year. “If the government wants 50 million doses [for 2022] we can do that,” he said.

Christophe Weber, the CEO of Japan’s Takeda Pharmaceutical, who is handling the import of the Moderna vaccine, said this month that his company is in talks to supply Japan with an additional 50 million doses.

Meanwhile, Moderna is rushing to ramp up production of its coronavirus vaccine.

At the end of April, the company raised its production outlook for 2022 to up to 3 billion doses, triple the amount it expects to produce this year.

Currently the biotech company is increasing capital investments, including toward contract manufacturers, in a bid to strengthen its production bases in the U.S. and Europe.

Moderna’s production of pharmaceutical ingredients at a factory run by Swiss contract drug manufacturer Lonza is expected to double, while the pace of filling vials and packaging at a contract plant in Spain is also set to more than double.