TOKYO — Japanese Prime Minister Fumio Kishida will dissolve parliament Thursday for a general election on Oct. 31, as the lower house comes to the end of its four-year term. The ruling Liberal Democratic Party and its junior coalition partner, Komeito, are seeking to maintain their dominance in the Diet despite political headwinds.

Kishida, elected as LDP leader last month, has said that the goal of the coalition is to retain a simple majority. While it may lose seats, the party hopes a fresh face will lift the party’s public support even as the economy remains sluggish amid the COVID pandemic.

Here are five things to know about the election:

How does Japan’s electoral system work?

There are 465 seats up for grabs in the lower house, the more powerful chamber of Japan’s bicameral parliament. About two-thirds of seats are filled through small constituencies, with the remainder chosen by proportional representation. The introduction of the districts in 1996 was designed to create a two-party system, but the LDP has remained in power for all but three years since.

Which are the main opposition parties?

The Constitutional Democratic Party is the biggest opposition group, with 112 seats. It is the successor to the Democratic Party of Japan, which was in power from 2009 to 2012. Many former DPJ cabinet ministers are in the CDP, including its leader, Yukio Edano.

The Japanese Communist Party is another opposition group, but it holds only 12 seats. Despite its name, it is more of a left-wing or center-left party.

The CDP and the JCP are planning to cooperate in the election and will field only one candidate from either party in small districts to maximize their chances of defeating LDP candidates. 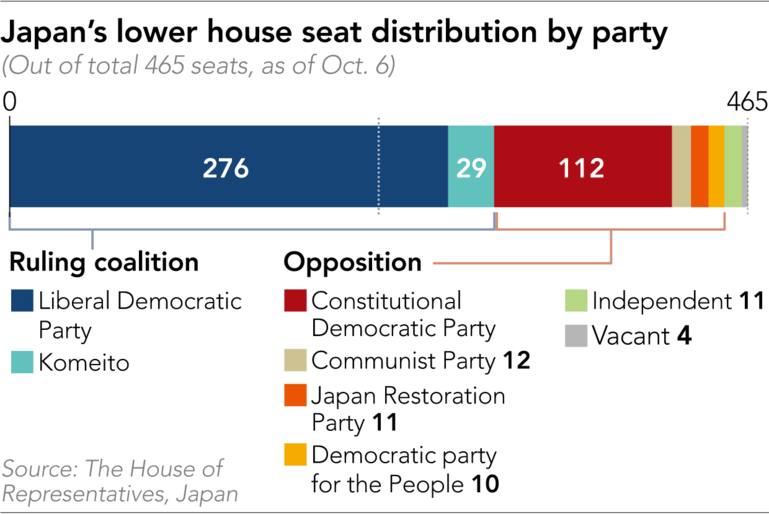 What are the major issues?

Both the ruling camp and the opposition are emphasizing economic redistribution over reform or growth — an indication of growing awareness across the political spectrum of widening income disparities exacerbated by the COVID-19 pandemic.

Kishida’s LDP has proposed “a new capitalism,” promising pay raises for essential workers such as nurses and caregivers, and a tax cut for businesses aimed at lifting wages. Komeito, a lay Buddhist party, pledges a one-time cash payment of 100,000 yen ($892) for children 18 or younger.

The is CDP promising a temporary reduction in the consumption tax to 5% from 10%, a temporary income tax waiver for anyone whose annual income is 10 million yen or less, and a cash payment of 120,000 yen to people on low incomes.

On social issues, the CDP is more liberal than the LDP. The main opposition party is proposing to allow married couples to have different surnames, and seeking to have women account for half the members of the parliament and local assemblies.

The Communists propose to cut the consumption tax rate, to impose higher levies on high earners and to raise higher income tax rates. Fumio Kishida is applauded after being chosen as Japan’s new prime minister in the lower house of parliament in Tokyo on Oct. 4. (Photo by Yo Inoue)

What turnout is expected?

National elections have attracted relatively few voters recently. In the previous national election in 2019, an upper house poll, only 48.8% of registered voters cast a ballot. Many people don’t bother to vote in the belief that the LDP-led coalition is doing a reasonably good job, and that the opposition remains fractured and is therefore unlikely to unseat the ruling coalition.

Low turnouts have historically helped the coalition stay in power, as they take advantage of their strong support bases in key constituencies, tapping groups such as the religious, nationalists, small business owners and farmers.

What about opinion polls?

The LDP had a support rate of 51% in a Nikkei opinion poll conducted on Oct. 4-5, compared with 8% for the CDP and 5% for the JCP. Around 27% of respondents said they didn’t support any political party. For the LDP, this was a sharp improvement from the 39% support it had in August, before former Prime Minister Yoshihide Suga announced his resignation on Sept. 3.

Despite this strong showing, there is little optimism for a landslide within the LDP, as support for the Kishida cabinet stood at just 59%, a low figure for a new government.

Nearly half of LDP lower house members are junior politicians, elected three times or less, who became lawmakers on the coattails of former Prime Minister Shinzo Abe. They have yet to establish a strong support base and are vulnerable to electoral swings.

The tepid support for Kishida, coupled with the cooperation among the main opposition parties, could make it harder for the LDP to retain its strong majority.