TOKYO — Mikako Fujita had been working as a barista for seven years when she began noticing, sometime in 2017, that it was becoming harder for her to do simple tasks like putting her hair up in a ponytail.

Not long after, she was diagnosed with amyotrophic lateral sclerosis, or ALS, an incurable motor neuron disease that destroys the nerve cells that control muscles throughout the body.

Four years later Fujita is still serving coffee to customers in Tokyo’s Nihonbashi district. The only difference is that now she does it from her home 300 km away in Japan’s central Aichi Prefecture.

To serve drinks at the Dawn Avatar Robot Cafe, Fujita uses a humanoid robot named Tele-Barista. With its two arms, it can grab a mug and prepare a French press coffee much like a human barista. Fujita controls the apron-clad robot using a computer mouse. As her disease progresses and makes it more difficult to move the muscles in her hands, she plans to switch to a control panel that can be operated by tracking her eye movements.

Fujita uses a different, camera-equipped, robot to talk with customers, asking them what kind of beans they would like or suggesting a chocolate to go with their cup of Kenyan coffee. OriHime, as the “avatar” robot is called, is around 20 cm tall and sits on the Tele-Barista’s shoulder.

Speaking to Nikkei Asia via OriHime, Fujita, now 50, recalled how she cried the entire night after being told she had ALS. But working through OriHime since 2018, she said, has given her a new sense of hope.

“I had never imagined preparing coffees remotely,” Fujita said, waving OriHime’s arms as she spoke. “Thanks to everyone’s support, it gives me a lot of pleasure when I make a coffee for someone and they say it’s good.”

While the Dawn cafe is staffed with robots, including a larger OriHime-D bot that serves drinks table to table, it retains a human touch thanks to the 60 or so “pilots” like Fujita, most of whom have a physical disability. 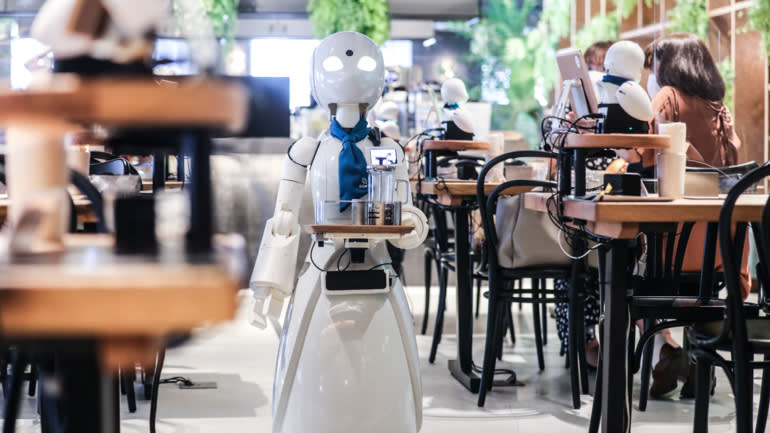 A robot makes its way between tables at DAWN cafe in Tokyo. (Photo by Ken Kobayashi)

Conversations and laughter between pilots and customers fill the shop, while OriHime-D robots bustle back forth among the tables.

Dawn is operated by Ory Laboratory, which also developed the robots. Co-founder and Chief Executive Ory Yoshifuji spoke about the philosophy behind Dawn.

“Of course there are vending machines for coffee everywhere,” Yoshifuji said. “But we didn’t want to replicate that. We wanted to recreate the action of preparing a coffee for someone else.”

Dawn opened in June as Ory Lab’s first permanent shop, after conducting four trials, starting in 2018, ranging from a few days to a few weeks in Tokyo and elsewhere in Japan. The shop is located in the same building as Ory Lab’s office, so developers can quickly make any adjustment the robots might need.

Yoshifuji, an engineer who himself spent three and a half years as a teenager confined at home due to illness, said he had long dreamed of having two or three separate bodies. This idea eventually led to the original OriHime avatar robot in 2010. He founded Ory Lab two years later.

The development of OriHime-D, which can carry items and move autonomously, made opening a remotely operated cafe possible.

Ory Lab raised more than 44 million yen ($400,000) through crowdfunding from March to May for the opening, far above its target of 10 million yen. The company also has around 10 big corporate sponsors, including telecom operator Nippon Telegraph and Telephone and the local subsidiary of U.S. drugmaker Biogen.

Remote work has become more widespread due to the COVID-19 pandemic, but it is not easy for those with severe illnesses or disabilities to jump into office work if they lack prior experience. That is why Ory Lab aimed for a workplace based more on physical labor and interaction with customers.

“The conventional wisdom is that bedridden people can’t work,” Yoshifuji said. “But I wanted to show that job opportunities are open for people who can’t move their body or even speak. I would like guests to know that these people exist, and that they are part of our society.”

Dawn is attracting international attention. Last week, Sophie Cluzel, France’s minister of state for disabled people, stopped by the shop during her trip to Tokyo for the opening ceremony of the Paralympics on Aug. 24. “It is very innovative that people can maintain their professional activity despite having a debilitating disease,” said Cluzel, who had a coffee served remotely by Fujita. “This is a humanistic approach,” she said. 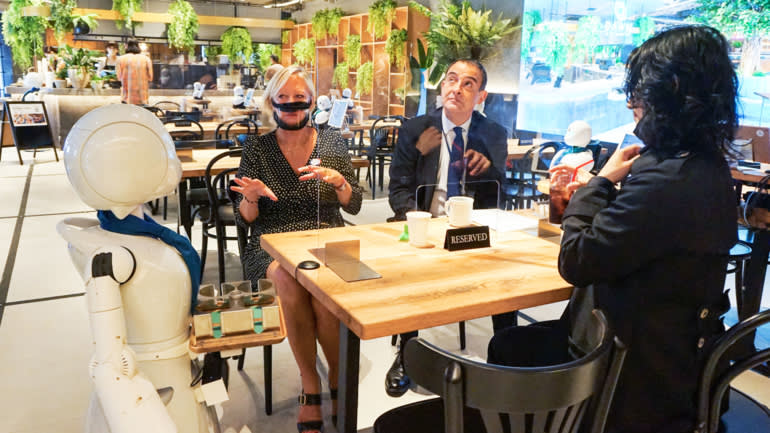 Miao Wen Xin, a 26-year-old Shanghai native who is studying Japanese in Tokyo, visited the coffee shop on Saturday. “The idea of having robots serving coffees is cool,” he said, adding that he plans to open a coffee shop, either in Japan or China. “I liked how pilots with disabilities showed the entire process, from choosing beans to pouring the coffee into a mug, and I liked the chocolate they suggested.”

In addition to running the coffee shop, Ory Lab makes money by leasing their robots and dispatching pilots and robots to other companies. Over 30 pilots have worked at companies other than Ory Lab, Yoshifuji said.

Mos Burger is among them. The Japanese burger chain has disabled employees at its eateries and offices, but “the idea of staff working remotely for one of our restaurants was surprising,” said Minako Morino, a representative of the chain’s operator, Mos Food Services.

The company introduced OriHime on an experimental basis at a Tokyo shop in July 2020 as a way to tackle the labor shortage and reduce face-to-face interaction between customers and employees during the pandemic.

Customers can place orders through the robot, get recommendations and more. “Guests can even just chat with a pilot without placing an order,” Morino said. “There are even fans who visit the shop to chat with a pilot,” she added. Separately, Mos Food Services temporarily introduced the OriHime Porter service robot in August to bring food from the kitchen to customer tables. The company is still working out some kinks with the internet connection and the ordering system, but the project “not only lets customers relax, it also gives our employees a chance to reflect on their work style,” Morino said.

Meanwhile, Fujita the barista said she plans to continue working at the Dawn cafe.

“A girl I prepared coffee for at a pop-up cafe told me she wanted to work at the avatar robot cafe,” Fujita said. “I’m glad that what I have done led to someone’s dream. My own dream is to work with her in the coming years.”

Here’s where to get the best roti prata in Singapore