The Arimine Dam in Toyama Prefecture: Toyama ranks second out of Japan’s 47 prefectures in terms of hydropower potential, and number one in terms of developed hydropower. (Photo courtesy of  Hokuriku Electric Power Co.)

TOYAMA, Japan — Japan’s effort to achieve net-zero greenhouse gas emissions by 2050 has grassroots corporate support in a region where developers are unlocking potential for water and wind power.

Starting last month, the Toyama-based regional lender Hokuriku Bank has been using only electricity generated by local hydropower for its data center in central Toyama Prefecture, about 260 km northwest of Tokyo.

The bank became the first company to sign up for an electricity plan launched by regional utility Hokuriku Electric Power Co. and Toyama Prefecture. For a premium added to the electricity bill, the company will be plugged to electricity generated from hydropower plants run by the prefecture.

Home to the tallest dam in Japan, the 186-meter high Kurobe Dam, Toyama Prefecture grew into a hub for a broad range of manufacturers early on with its ample electric power supply. Among them are zipper maker YKK and Nichi-Iko Pharmaceutical.

Toyama is second in the country for potential water-power resources and No. 1 in terms of hydropower already developed. Hokuriku Electric has announced that it will boost renewable energy output 30% by the fiscal year ending March 2031 compared with fiscal 2018 levels. It plans to build more hydropower plants and upgrade existing ones.

The Hokuriku region, located in the northwestern part of Japan’s main island of Honshu, is known for strong winds that blow from the Sea of Japan. In Fukui Prefecture, there are over a dozen wind-power projects currently under government assessment, including several offshore wind projects.

The total planned generating capacity of the projects adds up to 1.34 million kW, which is more power than a nuclear power plant that Kansai Electric Power Co. runs in the same prefecture. 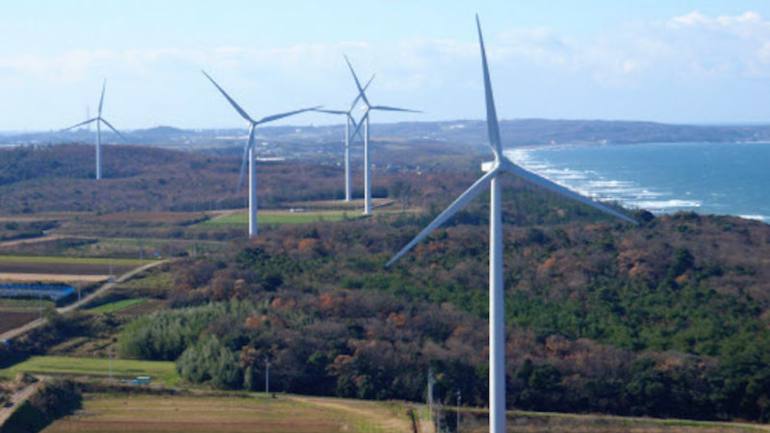 Winds from the Sea of Japan power turbines in the coastal city of Awara in Fukui Prefecture, part of the Hokuriku region. (Photo courtesy of J-Power)

In neighboring Ishikawa Prefecture, 12 wind farms were in operation as of last August, with nine more under review. Many of these planned projects are in the northern Noto peninsula, where winds are strong and steady. Ishikawa, known for its tourist destination of Kanazawa, has the most wind turbines of the three prefectures in Hokuriku.

Much of Japan’s existing wind power capacity is in the north, in Hokkaido and the Tohoku region. But these areas have seen a decline in availability for connecting wind farms to the regional power grids. Developers have been looking to other parts of Japan with greater potential for grid connectivity.

“Power project operators understand that the winds are good from the Noto all the way to Fukui,” said Akitoshi Umeda, president of Tokyo-based OSCF, which is involved in both onshore and offshore wind farm planning in Fukui.

An official for environmental protection in Fukui said that not all of the planned project will necessarily be approved, given their proximity and other factors. In addition to renewables, there are new efforts to produce hydrogen from aluminum, an energy-intensive core industry for the Hokuriku region.

In the city of Takaoka in Toyama Prefecture, startup Alhytec takes shavings produced when milling aluminum component mixes them with a chemical solution to create hydrogen. With the help of Toyota Motor, the company has tested the technology and confirmed its effectiveness, says President Nobuaki Mizuki.

Recycled aluminum is usually used to manufacture car engines. But with conventional engines expected to be redundant as electric cars take over in the future, the aluminum shavings can take on a new life in hydrogen production.