TOKYO — Japan deployed its Self-Defense Forces on Monday to aid in its vaccination drive, offering a much needed helping hand to accelerate COVID-19 inoculations targeted at 36 million people over the age of 65.

Medical officers and nurses will be stationed at two vaccination sites in Tokyo and Osaka. The reinforcements arrive as frustrations mount over the slow progress of vaccine distribution and prolonged business restrictions under the state of emergency.

The new vaccination effort also comes as Japan faces a difficult decision on how — or whether — to proceed with the Olympic Games.

The SDF have been essential at times of natural disasters, but setting up vaccination sites presents a new mission. Here are five things to know about the SDF and its role in giving COVID-19 jabs.

Why are the Self-Defense Forces getting involved?

Prime Minister Yoshihide Suga ordered Defense Minister Nobuo Kishi last month to set up vaccination sites. Suga told him that the SDF was “the only national organization where medical officers and nurses can carry out organized activities,” Kishi said.

A shortage of medical staff, rather than vaccines, has created a major bottleneck in the drive. So far, vaccination programs have largely been executed by municipal authorities. Many of them have had difficulty mobilizing enough staff, especially when it comes to getting private clinicians to contribute.

Suga called the SDF “the last bastion of Japan” in the country’s vaccination rollout. SDF medical staff have been responding to COVID-19 crises since last year, such as by dispatching personnel to the Diamond Princess cruise ship and areas where medical services were under severe strain.

How are the Self-Defense Forces conducting vaccinations?

The SDF aims to vaccinate 15,000 people per day, of which 10,000 would be in Tokyo and 5,000 in Osaka. They plan to operate two sites in each city for three months, allocating 80 medical officers and 200 nurses. They have also recruited additional staff.

The sites would administer the two-dose Moderna vaccines, which were formally approved in Japan on Friday. They would initially target people over 65 who have received vaccination tickets and have not yet received any shots. Residents, including foreigners, in Tokyo, Osaka and some neighboring prefectures are eligible. Bookings must be made online.

How is Japan’s vaccination program progressing?

Japan started vaccinating health workers in February. Protecting older adults has been the next priority for the aging country. It aims to vaccinate all people 65 and older who wish to get vaccinated by the end of July. There are no further targets set by the government.

Next priority groups are people with chronic health conditions, nursing care home staff and people over 60. Suga told reporters this month that he aims to vaccinate 1 million people a day. Meanwhile, about 7.6 million doses have been administered by Wednesday. Merely 2.3 million people have been fully vaccinated with two doses.

Vaccine supplies are being dispatched as planned, in line with a goal of delivering enough for most people over 65 by the end of next month, according to a health ministry official. Some reports, however, suggest that big cities are short supplied while remote areas are oversupplied with vaccines. As of May 16, only 2.3% of the elderly population in Tokyo have been vaccinated at least once. The percentage was 1.7% for Osaka, and no prefectures had reached double digits. 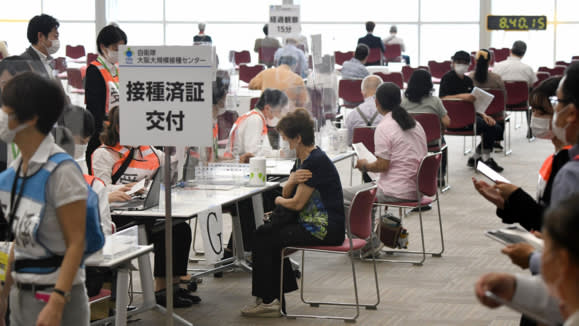 People wait to be processed after arriving a receiving COVID-19 vaccine in Osaka on May 24. (Photo by Takaki Kashiwabara)

What else is being done to speed up progress?

The government is working on regulatory changes to expand the number of people who are qualified to give injections. Only doctors and nurses were initially allowed, but dentists were added in April under certain conditions. Taro Kono, Japan’s administrative and regulatory reform minister, said this month that the government is considering enabling pharmacists to take part.

The Japan Medical Association has been emphasizing the role of family doctors to provide vaccinations for their regular patients. To motivate clinics to boost their vaccination efforts, Tokyo recently offered 175,000 yen ($1,600) per day as an incentive.

On top of the Pfizer vaccine, Moderna and AstraZeneca vaccines were only just approved on Friday. Other than the sites set up by the Self-Defense Forces, municipalities are expected to set up new vaccination sites dedicated to administering Moderna jabs. With all three types combined, Japan has secured necessary supplies to vaccinate all of its eligible population.

Are the military involved in other countries?

Some of the vaccination front-runners have benefited from military contributions. Reserve personnel of Israel Defense Forces joined the civilian vaccination campaign. In the U.K., both military planners and personnel were deployed to support the vaccine rollout — making use of the “battle preparation techniques,” Prime Minister Boris Johnson reportedly said.