TOKYO — Factional politics that have long dominated Japan’s ruling party may be coming to an end as the swelling ranks of relatively new members look at public opinion polls rather than allegiances to choose their next leader.

The Liberal Democratic Party is at a crossroads. All eyes are on whether the successor to Prime Minister Yoshihide Suga will be decided by a new generation of lawmakers sensitive to the political issues and trends of the times or by factional dynamics that has dominated the party for decades.

Several candidates are vying for the leadership post, which presumably will also mean a move to the prime minister’s office given the LDP’s strength in the lower house. Former party policy chief Fumio Kishida has already thrown his hat in the ring, while administrative reform minister Taro Kono has decided to run and former internal affairs minister Sanae Takaichi also intends to join the race. Seiko Noda, the executive acting secretary-general, is also considering a run.

But there is no clear front-runner in this race, in which the incumbent is not seeking reelection.

“We are on the cusp of some significant generational change inside the LDP,” said Sheila Smith, a senior fellow for Asia Pacific studies at the Council on Foreign Relations.

“There is a full generation of leadership potential waiting for their moment,” noted Smith. “Is this the moment? The real question is not faction versus faction, but the generational divide inside the factions.”

Factions are subgroups within parties that often vote on issues and intraparty elections in blocs. They provide resources to members so they can thrive politically — from offering campaign support to providing funds to run the offices of Diet members. Faction leaders also have sway in business and bureaucratic circles, which they extend to their members.

One reason that Suga decided not to run is that several younger LDP lawmakers voiced their concerns that the LDP cannot win the next lower house election, which will take place by Nov. 28 at the latest, with Suga at the helm.

Lawmakers who entered national politics in the 2012 lower house election that ushered the LDP’s return to power are now serving their third term. There are 84 of these three-term members, more than any other group. Including those who were first elected in 2014 and 2017, members serving three or fewer terms account for 46% of all LDP lower house legislators.

These younger members who have never experienced a difficult election became worried about Suga’s low approval ratings and began pushing for another leader. 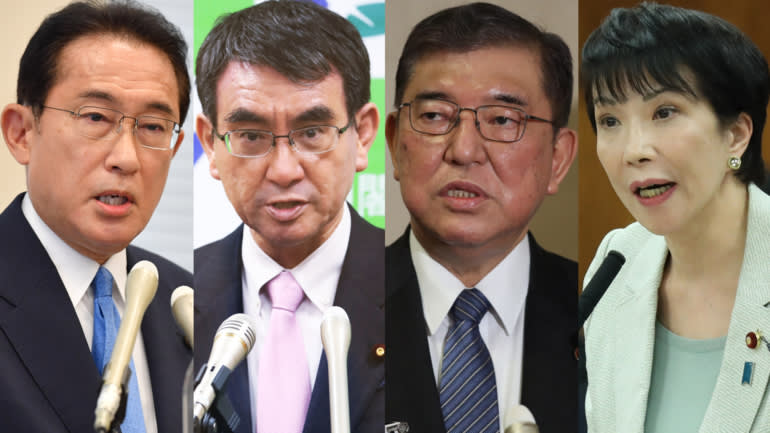 Even in the Hosoda and Aso factions, which both backed Suga in last year’s leadership race, members have said that they cannot reach a consensus on supporting him this time. So Suga, supported by neither the young members nor factions, really had no choice but to step down.

Kishida, who was the first to declare his candidacy, tapped this desire to choose anyone other than Suga. And he announced that he would remove Toshihiro Nikai from the powerful secretary-general post if elected, arguing that party executives should only be able to serve three consecutive one-year terms.

Kishida’s plan to appoint younger and less prominent party members to key posts also reflects the mood among those serving three of fewer terms. Some observers believed that Kishida would have an edge in a one-on-one battle with Suga.

The situation changed when Kono, the most popular choice for the next LDP president in public opinion polls, entered the race.

Kono is mainly backed by the younger LDP members. At 58 years old, he is a leader of the internet generation within the party and does not head a faction. Taro Aso’s faction, to which Kono belongs, is split on support for Kishida and Kono.

The Hosoda faction, which backed Suga last time, is undecided. Former Prime Minister Shinzo Abe, who has sway within this faction, is posed to support Takaichi. Takaichi used to be part of the Hosoda faction but she is currently unaffiliated.

In the Hosoda faction, LDP policy chief Hakubun Shimomura’s name has come up again. Members of the LDP’s largest faction are not all on the same page.

“It is going to be interesting to watch how the ‘kingmakers,’ Abe and Aso, also navigate that because they are really sensing this generational tension, because they can’t promise the numbers anymore,” Smith said.

In light of these developments, Ishiba — who is as popular as Kono in the polls — is weighing another run. Supporters believe that he has a good chance this time because party members will have the same number of votes as LDP Diet members.

Since the LDP’s return to power in 2012, the old guard has called the shots. This group includes Abe, who was prime minister for over seven years; his close ally Aso, who has remained in the deputy prime minister post; Suga, who served as Abe’s chief cabinet secretary before becoming prime minister; and Nikai and other party heavyweights.

The average age of the 276 LDP lower house members is 59, and those under 60 make up almost half. Almost a fifth do not belong to a faction. Several senior members have announced their retirement, so the party is certain to become younger.

About 20 three-term LDP lawmakers in their 30s to 50s plan to draw up recommendations this month on how to conduct the leadership election and party reforms. “We will wipe away the image that decisions are made behind closed doors, swayed by the wishes of party elders,” said Tatsuo Fukuda, who belongs to the Hosoda faction.

In last year’s LDP presidential election, the big factions backed the unaffiliated Suga because of his likelihood of winning. The factions do not hold the cards this time as well. The race is up in the air as the LDP experiences a battle between the younger generation and factional politics.

The DIORAMOUR Pop-Up Store pops up in Jakarta

12 Unique And Unusual Places To Stay Around The World