TAIPEI — Japan’s plans to ramp up the defense of its remote southwestern islands are being seen as a move to boost support for Taiwan as it faces a heightened Chinese military threat.

The move to station anti-aircraft and anti-ship missiles and hundreds of troops on Ishigaki island, 300 kilometers from Taiwan, comes amid a growing Chinese naval presence in the area and tensions between Beijing and Washington over Taiwan and a host of other issues.

Analysts say the plan is aimed as much at defending Taiwan as Japan, as any attack on the democratic island could quickly spread to Japan’s southern islands — Tokyo’s front line of defense.

The Japan Ground Self-Defense Force, as the land branch of the country’s military force is known, has been planning to put missiles and troops on Ishigaki since at least 2017 as anxiety grows in Japan about China’s assertiveness and intentions.

Ishigaki will become the fourth missile-armed island in the Nansei or Ryukyu island chain, which stretches south from Japan’s southern Kyushu island toward Taiwan, and covers an area of around 1,200 kilometers. According to a report by the Yomiuri newspaper, by 2023 the Japanese military also plans to put an electronic warfare unit on the island of Yonaguni, from where Taiwan, just 110 km away, is visible to the naked eye. In April, Kishi visited Yonaguni and was pictured looking out toward Taiwan, tweeting that he couldn’t see the island simply because it was cloudy that day.

Kishi’s confirmation of the Ishigaki deployment plan and timetable follow unprecedented statements in recent months by him and other Japanese officials about the need to defend Taiwan in the event of a Chinese attack, and publicly linking Taiwan’s security to Japan’s own.

Japan’s deputy Defense Minister Yasuhide Nakayama called on the world to “protect Taiwan as a democratic country” amid growing threats from China. Kishi said in an interview with the Financial Times that China’s military build-up was enveloping Taiwan, and urged the international community to pay greater attention to the “survival” of the island.

Japan’s defense white paper last month referred to the security of Taiwan for the first time, saying that a conflict in the Taiwan Strait would present one of the biggest challenges to Japan’s security.

Lu Li-shih, a former instructor at the Taiwanese Naval Academy and former captain of a Taiwanese naval patrol corvette, said that boosting the Nansei islands’ defense capabilities would help to block China’s military from reaching the eastern waters of Taiwan in the event of a conflict.

“The deployment not only defends the Japanese islands, but will also prevent the Taiwanese military from being confronted by the enemy on both its western and eastern sides,” he said.

Stationing more missiles on its outer islands “is not only about Japan defending Okinawa and the Senkaku/Diaoyutai Islands, it is also about preparing for an armed invasion of Taiwan by the People’s Liberation Army.” 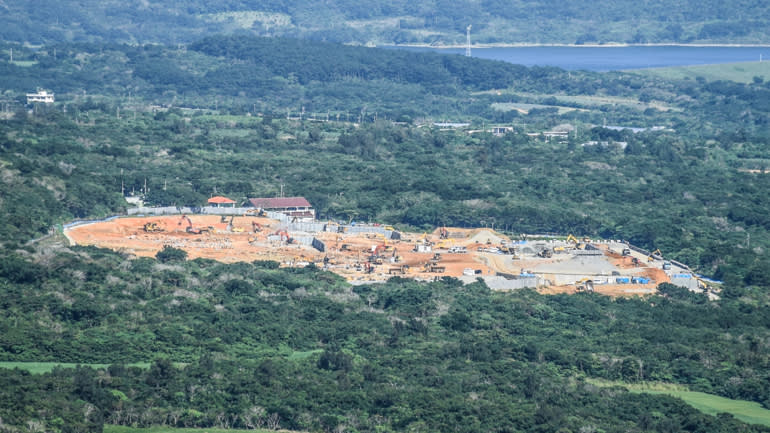 The construction site of a Japanese Self-Defense Force garrison on Ishigaki island, Okinawa. Photo was taken on Nov. 26, 2020   © Jiiji

China has been increasing military pressure against Taiwan. Since September last year, Chinese air force planes have almost daily entered an area of Taiwan’s air defense identification zone off its southwest coast, forcing Taiwanese jets to scramble in response. They have also at times flown south of Taiwan and into its ADIZ off its southeastern coast.

Taiwan regularly reports seeing Chinese naval vessels in waters off its east coast. On Tuesday, Chinese warships, fighter jets and anti-submarine aircraft carried out exercises off the southwest and southeast of Taiwan that China said was necessary to safeguard national sovereignty.

Drew Thompson, a former U.S. defense department official with responsibility for China, said Tokyo sees the threat from China as having intensified because of China’s “very aggressive, almost belligerent posture toward its neighbors,” and there is a realization that they need to invest more in defending Japan’s remote territory, which are close to potential Chinese targets: Taiwan and the Japan-administered islands in the East China Sea known as Senkaku in Japan and Diaoyu in China.

“Should Beijing use force against either Taiwan or the Senkakus the battle space wouldn’t be limited to just one place or the other, it would encompass essentially the theater, and Japanese territory would be very much involved in a contingency around Taiwan in particular,” said Thompson, who is also a visiting research fellow at the National University of Singapore’s Lee Kuan Yew School of Public Policy.

“I think that’s the recognition amongst Japanese military planners, they need more sensors, more shooters, more weapons systems… that can deny an adversary access to its territory, or attrite adversary forces if deterrence fails.”

Tokyo-Taipei relations have deepened in recent years as each government has dealt with challenges from China, paving the way for Japanese officials to break with decades of wariness about challenging Beijing and speak up for Taiwan.

Substantial exchanges between Tokyo and Taipei “have helped to bring about a change in the Japanese government’s attitude toward Taiwan,” said Lu, the former naval instructor.

These include Taiwan’s huge donations to Japan in the wake of the 2011 earthquake and tsunami, Taiwan giving 2 million masks to Japan in the early stages of the pandemic last year, and Japan returning the favor by sending more than 3 million doses of vaccines to Taiwan, he said.

Afghan refugees in India and Indonesia speak out: ‘am I a human or not?’

How Japan risks losing its shine for foreign workers