Japan and US wrestle over Kioxia and future of chip security

TOKYO/WASHINGTON — On Friday, former Toshiba memory unit Kioxia Holdings held an online board meeting connecting with executives in the U.S. The plan was to kick start a process toward an initial public offering and approve an application to the Tokyo Stock Exchange. That item was taken off the agenda.

The IPO was approved by the TSE in 2020 but the plan was derailed by U.S.-China trade tensions, which hurt earnings. Since then, new options have emerged, including a merger with Western Digital.

But while creating a U.S.-Japan tie-up in the semiconductor sector fits with the narrative of countering the rise of China, the allies are sensitive of handing over too much control of such a key industry. Semiconductors are the cornerstone of the data society, and both countries are eager to bolster their respective chip industries. The deal is likely to be a test case of what the U.S.-Japan alliance will look like in the coming years.

At the U.S.-Japan summit in Washington on April 16, the headlines focused on how President Joe Biden and Prime Minister Yoshihide Suga discussed the situation over the Taiwan Strait. But another key topic was semiconductors.

“We are going to work together across a range of fields,” Biden said at the joint news conference, “from promoting secure and reliable 5G networks; to increasing our cooperation on supply chains for critical sectors like semiconductors; to driving joint research in areas like AI, genomics, quantum computing, and much more.” 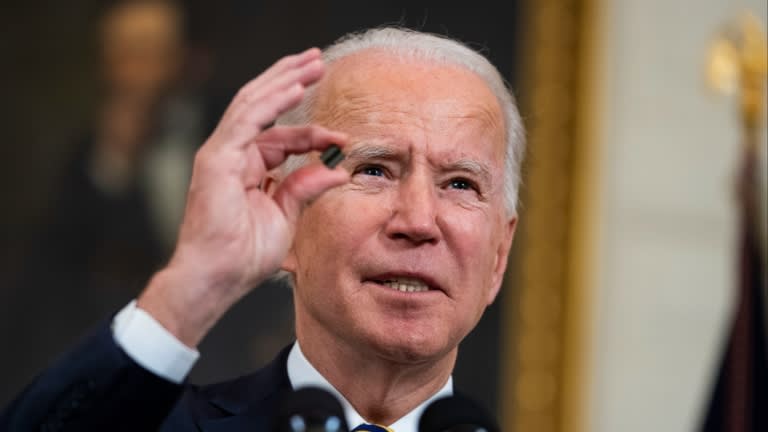 U.S. President Joe Biden holds a semiconductor during a White House event on Feb. 24. The Biden administration and Congress are considering a bill that will direct over $50 billion to bolster semiconductor production.   © Getty Images

The U.S. side proposed establishing a joint fund with Japan and the European Union to develop cutting-edge semiconductors.

The reason why Washington wants to collaborate with Tokyo is to compete with China, which is sweeping the global market in the high-tech field. Many American chip companies are now fabless, and U.S. market share in global production has fallen to 12% in 2020 from 37% in 1990.

This points to the risk of dependence on China for vital supplies.

The Biden administration and Congress are considering a bill that will direct over $50 billion to bolster semiconductor production. The idea is to invest in the production of advanced semiconductors in the U.S., while increasing procurement of memory chips from allies such as Japan and South Korea.

It was around the time of the Biden-Suga summit that talks of a business integration between WD and Kioxia gained traction. Such a merger would fit perfectly with the U.S.-Japan semiconductor collaboration that the leaders envision, the thinking went.

“I think we have a tremendous partner in Kioxia and we look forward to making the future happen together,” WD’s CEO David Goeckeler told Nikkei in an interview after the Biden-Suga summit. 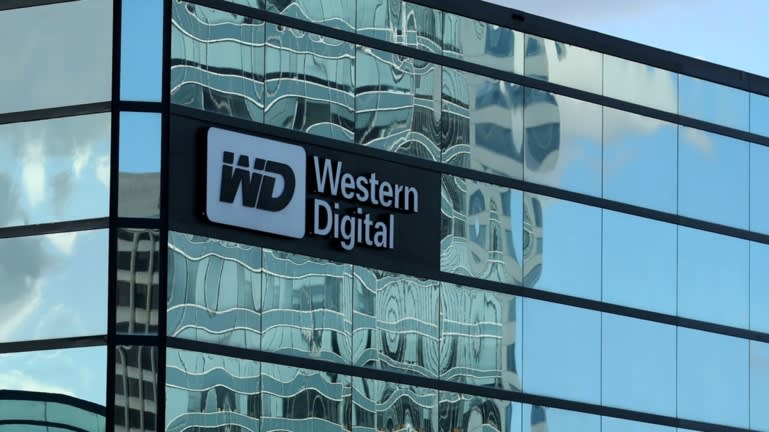 A Western Digital office building is shown in Irvine, California. The company would likely prefer the merged entity with Kioxia to be based in the U.S.   © Reuters

A major player in hard-disk drives, WD entered the memory field with a 2016 acquisition of SanDisk. If it succeeded in integrating with Kioxia, the scale would be comparable to market leader Samsung Electronics.

But Kioxia was reluctant to be gobbled up by WD. It made a counter offer in which the Japanese company would be the leading partner. Meanwhile, major shareholders Toshiba and Bain Capital — eager to offer returns to shareholders — were said to be preferring an IPO, which would have been the easier path to monetization. Progress stalled.

However, the talks continued, producing several compromises, such as an equal partnership and a sharing of board seats in the newly merged entity.

The main sticking point was where to locate the headquarters. WD is thought to have insisted on having the company be an American one for tax purposes.

But the desire to revive the semiconductor industry is equally strong in Japan. Global market share of Japanese manufacturers dropped to 10% in 2019. Already 64.2% of domestic demand depends on imports. The Ministry of Economy, Trade and Industry is hungry to attract chip factories from countries with no security concerns.

Within METI, many officials take the stance that factories as well as high-value-added research and development functions need to stay in Japan.

A caucus within the ruling Liberal Democratic Party that was launched in May to focus on chip strategy is also closely watching the developments. “If the merged company remains a Japanese entity with equal investment, we would welcome that,” a member said, signaling that moving the headquarters to the U.S. would be unacceptable.

China has a massive subsidy program to raise the ratio of domestic semiconductors to 70%. A U.S. industry group calculates that the construction and operation costs of advanced factories are 30% cheaper in China, and half of that is due to public funds.

Japan and the U.S., meanwhile, depend on Taiwan for production. Taiwan also accounts for more than 90% of the production capacity of advanced-logic semiconductors and 20% of all semiconductors. As China increases military pressure on the island, the U.S. and Japan are pressed to find alternative sources.

US completes troop withdrawal from Afghanistan

Pentagon admits failure to evacuate as many from Kabul as hoped