JAKARTA — It’s a tale of two countries when it comes to Indonesia’s COVID-19 situation.

The capital, Jakarta, is set to remove restrictions over the coming weeks as cases continue to decline and half of its residents are fully vaccinated. But concerns remain across the rest of the sprawling archipelago, especially in remote regions where infections are surging and vaccines are scarce.

Indonesia’s new daily cases averaged 11,600 over the past week, a drop from over 16,000 the previous seven days. This marks a significant improvement from a peak of around 50,000 in mid-July, when the country briefly was the most infected place in the world.

“Hospital occupancy rates for COVID-19 cases are getting better,” President Joko Widodo said during a live YouTube address on Monday. “The national average is now around 27%.”

That is down from the 90% rate that the most populous provinces of Java island experienced for much of July.

But COVID-19 continues to take many lives, with nearly 700 per day dying over the past week. Daily fatalities are currently second only to the U.S., reflecting in part overloaded hospitals in smaller towns and rural areas that were poorly equipped to begin with.

“[The high fatalities] might be happening because some people still prefer to self-isolate,” said Wiku Adisasmito, spokesman for the government’s COVID-19 task force. “Therefore, I’m asking regional heads … to ensure the centralized isolation of COVID-19 patients so that their conditions can be monitored and deaths can be minimized.” 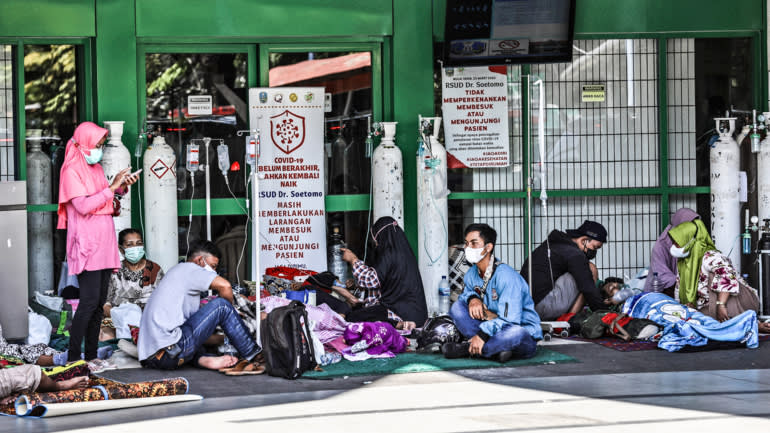 People sit on the floor outside the emergency ward of a hospital that cannot take any more patients amid a surge in COVID-19 cases in Surabaya, East Java, Indonesia, on July 11   © AP

Jakarta, the national epicenter of the crisis through much of the pandemic, is no longer among the top five provinces in terms of cases; in terms of deaths, it is 17th of 34 provinces.

Some 54% of the capital’s nearly 11 million residents are fully vaccinated, and 92% had received at least one shot as of Tuesday. But nationally, the figures stand at 13% and 23%. Most of the doses administered are from China’s Sinovac, with smaller numbers of vaccinations from AstraZeneca, Moderna, Pfizer-BioNTech and Sinopharm.

The government on Tuesday further eased tough movement restrictions that had been imposed across Java since early July.

The new measures, in effect through Monday and subject to evaluation, include longer operating hours for shopping malls and wet markets, and increased dine-in capacity for open-air eateries. Manufacturers can now operate fully, provided workers are divided into shifts.

Many locations are required to screen visitors using a smartphone app developed by the health ministry that shows the vaccination status of users. The app drew controversy recently for an alleged data breach that exposed sensitive data of more than 1 million users.

As for schools, concerns have been raised over their gradual reopening, which began on Monday in some regions, with in-person classes allowed at half capacity. In Jakarta, 610 schools are taking part in the reopening and around 900 more are expected to join by the end of September. Health ministry data shows only 6.5% of children aged 12-17 have been fully vaccinated, fueling concerns they will spread the virus to their families.

“Student vaccinations must be accelerated if in-person classes are to be held,” local watchdog LaporCovid-19 said.

Bali is the second most vaccinated province after Jakarta — over 70% of its population has received at least one jab and around 40% are fully vaccinated. But with 50% to 70% hospital occupancy rates for COVID-19 patients, the entire resort island remains under the strictest curbs. This further disrupts Bali’s preparations to reopen to foreign tourists, as well as the tourism ministry’s plans for a “working from Bali” campaign.

The situation in the restive province of Papua, meanwhile, is alarming. Hospital occupancy rates in two of its regencies reached 100% on Sunday, according to health ministry data.

Occupancy rates of over 50% have also been reported in parts of Aceh, West Sumatra, East Kalimantan, South Sulawesi and East Nusa Tenggara provinces.