BALI — “Here in Bali, we believe in the law of karmaphala — that our actions will determine what we receive in return, good or bad,” says Gede Robi, frontman of rock band Navicula and the lead in “Palau Plastik,” a new documentary about the sources and consequences of, and possible solutions to the scourge of plastic waste that pockmarks so many of Indonesia’s 17,000 islands.

The movie-length documentary, translated from Bahasa Indonesia as Plastic Island, kicks off at the beaches of southern Bali, where at the start of every year, hundreds of tons of rubbish wash over from the neighboring island of Java, the economic engine of Indonesia, and from Balinese rivers that locals and businesses use as garbage dumps.

The fact that Palau Plastik is showing at Indonesian cinemas now is a reflection of the timeliness of the message and local interest in the issue. Just 11 other Indonesian documentaries have ever been shown on local big screens. It will also be released globally on Netflix later this year.

There they sneak into a paper and cardboard recycling factory that sells plastic waste smuggled from the West in containers meant only for paper waste. They then follow a dump truck carrying plastic waste from the factory to a nearby village. There it is sorted and dried by dirt-poor families to be resold as fuel for furnaces in tofu factories. Plastics that contain carbon and hydrogen monomers are highly flammable and once ignited, produce flammable gases that create more heat. Tofu makers use it because it is more cost-effective than burning wood but spews uncountable tons of carcinogens into the atmosphere.

“We would not have this fuss if America didn’t send us their garbage,” Prigi shouts through a megaphone at a protest at the U.S. Consulate in Surabaya. “Don’t send your trash to Indonesia. We are already poor and ugly. And then we get sent more trash. It’s such a mess.” 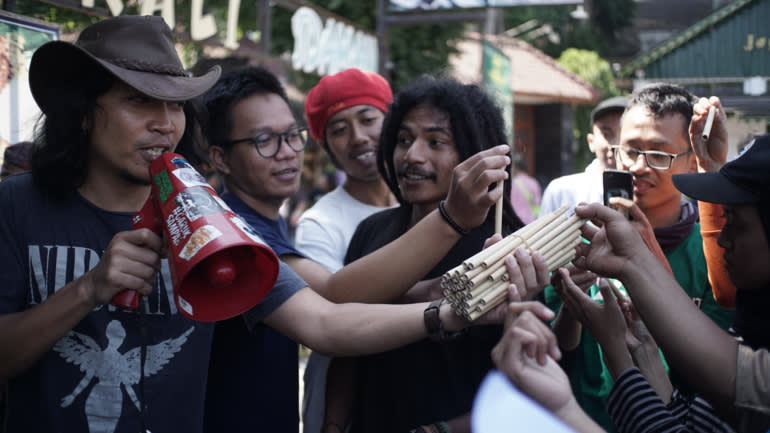 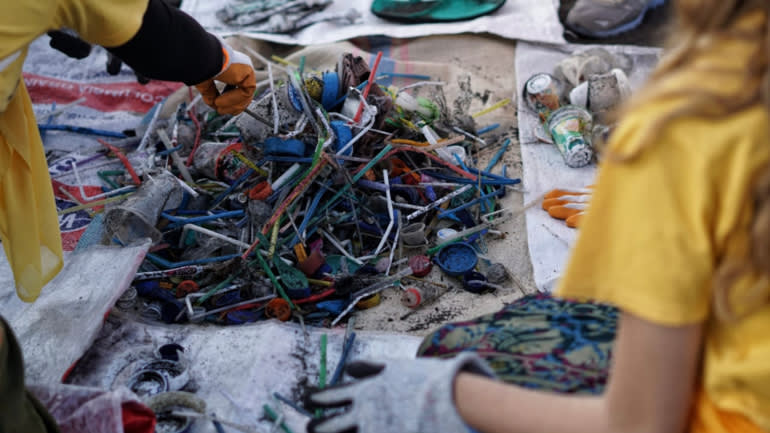 Prigi’s frustration is understandable. A widely referenced 2018 study by the International Union for Conservation of Nature claimed Indonesia was the world’s second-largest source of marine plastics after China, accounting for 1.3 million of the 8 million tons that makes its way into the ocean every year.

But a study published last year in the journal Science Advances identifies the U.S. as the world’s largest producer of plastic waste and claims earlier research failed to determine the source country of the plastic that often ends up in developing parts of Asia.

“I’m in shock,” Gede Robi, says, after picking up Nestle- and Unilever-branded plastic waste that seemed to originate from the U.S., Australia, Italy and Canada. “We try to follow their example in terms of consumer awareness and producer awareness. So how is it that these civilized people and societies who take responsibility for their garbage — they clean it, they dry it, they separate it — but then, after all that, it ends up here in Indonesia. What’s that about?”

The scene, along with another in which Gede Robi asks Indonesian President Joko Widowo to pass nationwide regulations already implemented in Bali to ban plastic bags at stores but fails to elicit a definite answer from the president, provides much food for thought.

Hammering home the message is footage of wildlife conservationists using a pair of pliers to yank a plastic straw from the bleeding nose of a turtle, as a voiceover tells audiences ominously that in the time since they started watching the documentary, 65 trucks of plastic waste would have been dumped into Indonesian waters.

The film then examines what happens when such a proliferation of plastic waste pollutes not only the planet but our bodies. A laboratory in Java analyzes a stool sample from Gede Robi and finds it to be riddled with toxic microplastics. The scene is repeated over and over with stool samples from city mayors, musicians and influencers who Gede Robi meets en route to the capital, Jakarta. 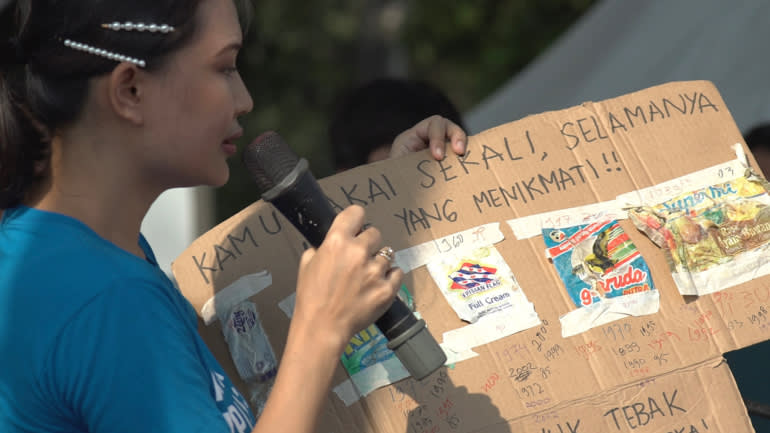 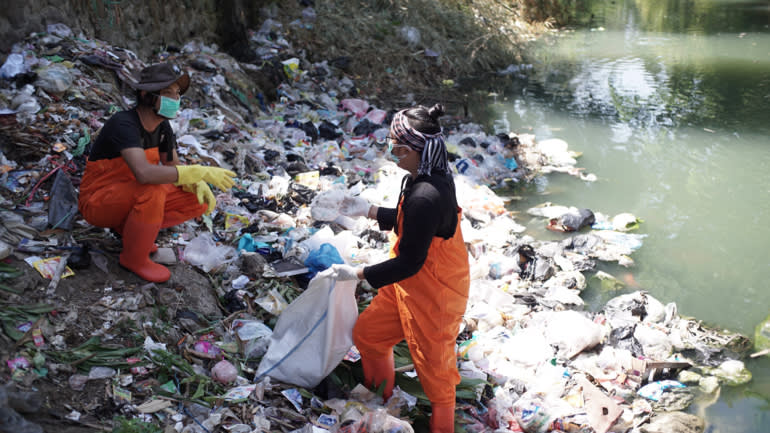 Top: Tiza Mafira, a lawyer and environmental activist, holds a sign displaying discarded plastic wrappers at the Plastic Free Parade in Jakarta in 2019. Bottom: Volunteers remove plastic from a river in Java.

The last third of the film shows ordinary Indonesians doing their bid to save their world, like volunteering to clean heavily polluted rivers. In one heartwarming scene, a mother teaches her daughter how to sort plastic waste from natural beach debris. In another scene, volunteers walk around Jakarta offering to exchange pedestrians’ plastic bags for reusable bags made of natural fibers, explaining how plastic bags are used for an average of 15 minutes but pollute the planet for more than a century.

Palau Plastik Executive Producer Ewa Wojkowska, who is also the chief operating officer of Kopernik, a nonprofit organization that develops solutions for social and environmental problems and which cofinanced the film, says the plan was to involve all different segments of society in the film.

“One of the things we wanted to achieve with this movie was to get everyone around the table,” she says. “We are solution-focused. We wanted to do less shaming and blaming and not go on the attack with corporations because there are a lot of foreign films out there that have already done that. We want to bring more people into the conversation and do it in a way that is appropriate for Indonesia and which resonates with corporations and policymakers as well.”

Palau Plastik is screening in Indonesia until the end of May. Wojkowska has been pleased with the film’s reception so far and its upcoming Netflix release but says ticket sales were never the main objective.

“What we really want is to get this film into every school, university and government in Indonesia,” she says. “As soon as the premiere is over we will be focusing on that. So far, the response from the government has been positive.

“Nothing we are saying in this film is new. We are just putting it out there in a format that a wider audience can see compared to our usual channels with the ace card being Gede Robi, who is a rock star in Indonesia.”

Four future of work and workplace models most likely to emerge