TOKYO — With India on pace to become the world’s most populous country by the end of the decade, some states are looking to slam the brakes on population growth through incentives that reward couples for having no more than two children.

The controversial policy proposals, which include penalties for bigger families, are being driven by worries that a swelling population will put further strain on a tight job market, as well as supplies of food, electricity and other necessities.

Uttar Pradesh, a poor northern state that is home to more than 200 million people, has released draft legislation that seeks to achieve population “stabilization” and promote a “two-child norm.”

Families in India’s most populous state with two children would be rewarded with a range of benefits from higher pay and subsidies for real estate purchases to soft loans and utility bill rebates. One-child families would receive even more perks in education, health care and employment.

Couples with three or more children would become ineligible for state subsidies and welfare benefits, as well as losing the right to run for a state assembly seat.

Uttar Pradesh is one India’s biggest sources of migrant laborers for other states. The bill has been opened up to public comment while the assembly debates the proposals.

Other populous states such as Karnataka and Gujarat are mulling similar two-child measures. A bill under consideration in Assam state would deny government jobs to parents of three or more children. 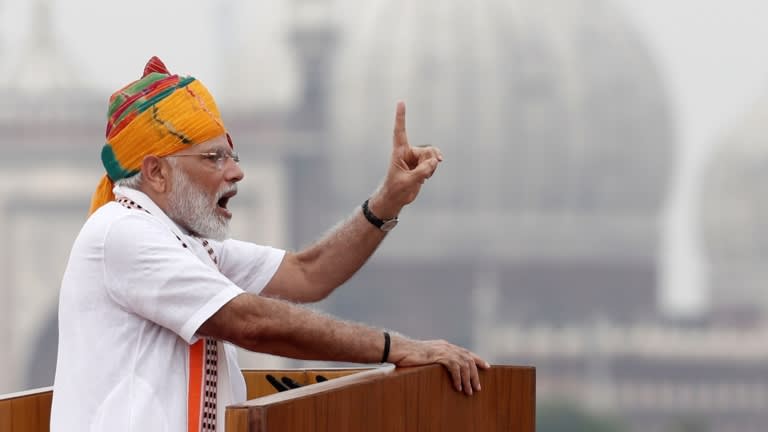 Indian Prime Minister Narendra Modi during an Independence Day speech in 2019. His ruling BJP party has been accused of pushing a Hindu-nationalist agenda.   © Reuters

Fueling these moves are concerns that the economy would be hamstrung by rapid population growth.

“Why should poor people not have toilets, no electricity in the house, no house to live in, no water supply and no bank account?” he said, acknowledging the gaps in the country’s infrastructure.

The World Bank forecasts India’s working-age population of age 15 and older to grow by around 1.3 million people every month until 2025.

To keep a stable labor market, India must create about 8 million jobs a year, but the coronavirus pandemic has complicated this scenario. The country’s central bank, the Reserve Bank of India, downgraded in June its projection for real gross domestic product growth to 9.5% for the year through March 2022 from 10.5% as of February.

India’s total fertility rate, or the average number of children born to a woman over her lifetime, stood at 2.2 in 2020, sharply down from nearly 6 in 1960. This mirrors a fall in the global rate from 5.05 in 1964 to 2.4 in 2019. But India’s decline does little to ease its population anxiety, given the country’s sheer size.

Amit Singh, a 27-year-old factory worker and father of an 8-month old toddler in Uttar Pradesh, called it a good step to curb population. “Why do families need to have four to five children? That era has gone. No one can afford to feed such large families these days,” he said.

“I have 5 more siblings but I know the struggle we faced while growing up.”

Critics question the motivation for some state’s population control proposals. Assam state Chief Minister Himanta Biswa Sarma has said the population increase among minorities was worrisome, referring to Muslims who make up a relatively large slice of the Hindu-majority state. The Muslim population is generally growing fast. The Modi-led ruling Bharatiya Janata Party embraces Hindu nationalist positions, and Sarma is a leading member of the BJP.

India had roughly 1.38 billion people in 2020, the United Nations estimates, recording an increase of 145 million over the preceding decade that easily eclipses Japan’s entire population. India is on track to have more than 1.5 billion people by 2030, on the way surpassing China to become the world’s most populous nation.

Communist-run China successfully controlled its population under its one-child policy introduced in 1979, but the country is now quickly graying — a factor that threatens to depress economic growth.

India’s previous national and local efforts for population control did not work well in its parliamentary democratic, ethnically diverse society. As its states move to tackle the problem again, India has less cause for concern over the risk of undercutting its labor force, at least for the time being: the median age of its people is about 28 years, or 10 years younger than China’s.

One democracy India can look to for precedents is Indonesia, the world’s fourth-most populous country, with roughly 270 million people. Indonesia in January strengthened its national family planning program. The country aims to reduce its total fertility rate from about 2.3 now to 2.1 in 2024.

How Did I Survive Summer Before Salmorejo?