GUANGZHOU — Just days after Guangzhou reported a surge in coronavirus cases at the end of May, a massive PCR testing lab appeared seemingly out of thin air at a gymnasium in the southern Chinese city.

First appearing in Wuhan during February 2020 at the beginning of the pandemic, the inflatable Huo-Yan lab developed by Chinese genomics company BGI Group has been used in over 30 countries and regions.

The Guangzhou site took roughly 10 hours to set up, and it could handle 2.1 million polymerase chain reaction tests per day. Once infection numbers were back under control about a month later, the lab vanished as quickly as it had appeared.

The pandemic has been a boon for BGI, whose net profit increased nearly eightfold in 2020 thanks to surging demand for PCR tests. The company looks to tap its global connections forged through Huo-Yan to expand its genomics business worldwide.

“The Huo-Yan lab will be our foothold for overseas expansion,” CEO Zhao Lijian said in August during an interview with Chinese media.

But BGI is also being called the “Huawei of genomics,” as increasing U.S. alarm over its growing footprint threatens to derail the company’s ambitions of becoming a truly global player.

BGI was founded in 1999 by a group of Chinese researchers who participated in the global Human Genome Project. The company moved its headquarters from Beijing to Shenzhen in 2007 and grew into a major provider of prenatal testing for genetic conditions.

Interest in the company soared after its debut on the Shenzhen Stock Exchange in July 2017, with the stock going limit-up for almost a month straight. Tailwinds such as generous subsidies by Shenzhen authorities for genetic tests also drove the company’s growth.

COVID-19 reshaped BGI’s business environment practically overnight. While the company drew about 40% of its revenue from pregnancy-related businesses in 2019, it now earns the majority via coronavirus-related operations ranging from the Huo-Yan labs to PCR kits. Overall revenue tripled in 2020.

Though the end of the pandemic would benefit the global economy, BGI stands to suffer a heavy blow. Already, January-June revenue dropped by about 10% and net profit by about 30% on the year amid falling prices for PCR tests, one of the company’s key moneymakers.

BGI is pursuing new opportunities with an eye on a post-pandemic world. It has taken the Huo-Yan labs across China and beyond, including Saudi Arabia, Gabon, Malaysia and the Philippines. Using its new connections in these countries, BGI “will partner with medical institutions to expand services like prenatal testing and cancer diagnoses,” Zhao said.

The company also looks to produce equipment for its genetic tests in-house. It acquired a leading U.S. equipment maker in 2013. BGI Group unit MGI Tech is set to debut on Shanghai’s STAR Market by the end of the month to raise funds for further development and production in the field. 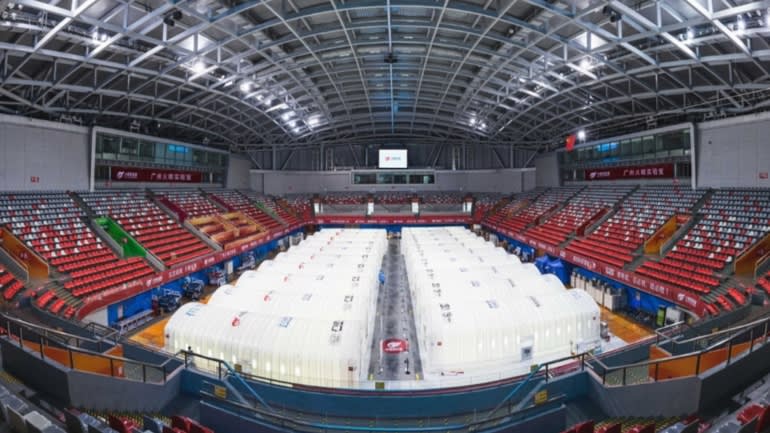 The Huo-Yan lab in Guangzhou could test up to 2.1 million samples per day. (Photo courtesy of BGI)

Huawei has drastically reduced smartphone production due to difficulties securing a chip supply in the face of American sanctions. Some think BGI could encounter similar obstacles after the U.S. Commerce Department added its affiliates to the export blacklist known as the Entity List in July 2020, alleging their involvement in human rights abuses against the Uyghur minority in China’s Xinjiang region.

“The company strictly abides by all international business practices and laws and regulations, conducts business operations in compliance with regulations on a global scale, and is committed to making positive contributions to public health in various countries and regions,” it said in a statement.

But Washington continues to raise alarms over the genomics company.

“BGI may be serving, wittingly or unwittingly, as a global collection mechanism for Chinese government genetic databases,” concluded a March report by the National Security Commission on Artificial Intelligence. “The global reach of China’s genomics giant, BGI, poses similar threats in the biotechnology sector as Huawei does in the communications sector.”

In early July, Reuters reported that BGI developed its prenatal tests together with the People’s Liberation Army, and that genetic data it collects might end up in the hands of Chinese authorities. The Chinese Foreign Ministry later slammed the report as an unfounded attack by the U.S.

“We are making steady progress toward realizing our vision of bringing happiness to humanity through genetic technology,” Zhao has said.

Still, BGI has exported Huo-Yan labs only to participants in Beijing’s Belt and Road infrastructure-building initiative, and other pro-Beijing countries. Making inroads in the U.S. and other Western nations could prove trickier.