How To Get From Bangkok to Chiang Mai

Need to get from Bangkok to Chiang Mai? Although Chiang Mai is over 400 miles away, this is a well-travelled route, so you have options varying from long journeys with incredible views, to short plane trips. Most travellers who visit Thailand fly to Bangkok, and while it’s worth staying a few days there, will eventually leave for less smoggy pastures.

Despite Chiang Mai being one of the largest cities in Thailand, it has a much different vibe to Bangkok. It’s a laid-back sanctuary of temples, palaces, museums, and incredible markets. The city is backed by the myserious mountains, offering incredible scenery and crisp, fresh mountain air. You might want to get there as soon as possible or you might want to take your time, either way, here are the best ways to get from Bangkok to Chiang Mai.

Getting from Bangkok to Chiang Mai 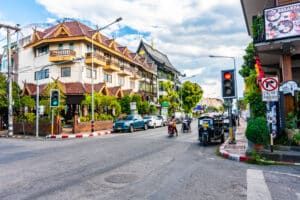 If you’re travelling for a while and/or on a budget, this could be the best option for you. Travelling by bus is the cheapest way to get from Bangkok to Chiang Mai. However, it can take anywhere from 12 to 15 hours, depending on traffic, so if you’re short on time then this might not be the best option.

There are two types of buses – Express buses and VIP buses. Despite the name, there isn’t actually any difference in time on the Express bus, and you actually get fewer benefits than the VIP ones. Express buses have air conditioning and food, while VIP buses have a team member on board, onboard entertainment, reclining seats, and more legroom. You can even go one step further and hop on the VIP 24 bus, which takes on fewer passengers and has single-row seats, so you don’t have to worry about sitting next to someone if you don’t want to. They also have Wi-Fi, restrooms, power outlets, as well as free water and snacks.

The buses leave from Bangkok’s Mo Chit Bus Station several times a day, arriving at the main bus station in Chiang Mai. While you do technically arrive in Chiang Mai, the main tourist areas and hotels are a while away. You can either hop on a shared bus, which is called a songthaew, to get you as close as possible to your accommodation, or catch a taxi to get straight to your door. If you’re short on time, or if you just want a simple journey, then flying is your best bet. There are. two airports in Bangkok that fly to Chiang Mai – Suvarnabhumi International Airport and Don Mueang Airport, which is a domestic airport. The domestic airport carries the budget airlines Nok Air and AirAsia, while the international airport has a wide range of airlines, although it does also carry Air Asia. Other than that, there isn’t really any difference between the two. The prices are roughly the same and it takes the same amount of time to get to Chiang Mai. It’s worth checking out which airport is closest to your Bangkok accommodation, though.

The flight is up to 1 hour and 15 minutes, so you can be walking the streets of Chiang Mai before you know it. Prices are fairly reasonable, even during the high season. And especially if you book in advance. You can sometimes find even cheaper deals if you visit in the low season, which is July to October. 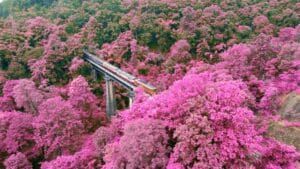 If you like to travel slowly and take in views you might not have otherwise seen, you’ll love the train from Bangkok’s Hua Lamphong Station to Chiang Mai. A train journey will always have lower carbon emissions than a bus or a plane, so if you’re environmentally conscious, this is your best choice. Plus, you get stunning views of rice paddies and rainforests, as well as a look into life in rural Thailand.

Sleeper trains are generally comfortable, too. You have the difference between a first-class ticket and a second-class ticket. A first-class ticket will get you air conditioning, a spot in a two or four-person carriage, and a food cart on board. You can also book the entire two-person carriage to yourself if you want the privacy, and they actually only charge one person the price of 1-and-a-half tickets, instead of two. A second-class ticket usually only has fans and no air conditioning, as well as seats rather than beds. If you really want to save money and think you can handle the heat, then this is a viable option for you, although we think the savings aren’t worth the discomfort.

The post How To Get From Bangkok to Chiang Mai appeared first on Big 7 Travel.

The 7 Most Instagrammable Honeymoon Destinations In The World