Hollywood Collides with the Art World 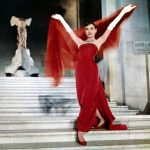 The new exhibition “Bonnie Lautenberg: Art Meets Hollywood” is the museum premiere of Bonnie Lautenberg’s new series. Her digital collages in this exhibition are 28 diptychs where she pairs scenes from famous films alongside iconic works of art. Lautenberg’s only rule for her experimental process is that both the film and the artwork originated within the same year.

On view now at Boca Raton Museum of Art until August 21st, Lautenberg channels the creative zeitgeist between filmmakers and artists during each year that she intuitively chronicles, starting in 1928 up until 2020.

Watch the video here featuring Lautenberg in conversation with Irvin Lippman, the Executive Director of the Museum.

Lautenberg plays matchmaker to the 1957 movie Funny Face (pictured above) by combining Audrey Hepburn’s bold pose with Clifford Still’s painting PH971–both majestic, and both glamorous. When viewed together this way in the museum gallery, the combination seems to make perfect sense, as if they were made for each other.

In another work from this series, the terrifying scene she selects from the 1975 movie Jaws literally screams above a Willem De Kooning painting that conjures what could appear to be blood spilling into the water below . . . 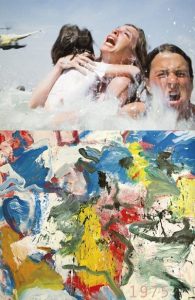 Her pairings can also be surprising and intriguing: who would have imagined the 1963 scene of Paul Newman from the classic movie Hud would look so ideal next to Warhol’s seminal painting of Elvis from the same year? (pictured below) 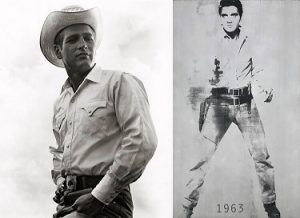 During the past five years she has worked on this series, Lautenberg made a crucial discovery: the artist Lucio Fontana was so moved by the Antonioni film Red Desert that he created one of his largest red paintings, influenced by what he saw up on the big screen (pictured above is the pairing of the two, by Lautenberg).

“This solidified my belief,” says Bonnie Lautenberg. “Throughout art history, artists have always been influenced by some force going on in the world around them.”

“I started thinking about how artists who work in different art forms might have influenced each other. I decided to explore how one art form can influence another,” adds Lautenberg.

Lautenberg is an artist, photographer and writer based in New York and Palm Beach. During the past 30 years, her works have been featured in gallery shows, museums and art fairs throughout the United States. Lautenberg’s work is currently on view at the New York Historical Society’s Center for the Study of American Culture. 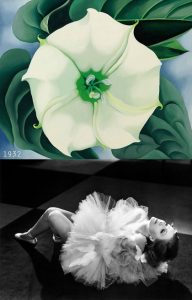 Some of Lautenberg’s pairings in this series featured at the Boca Raton Museum also stem from her own personal history.

In the 1960s her father purchased the Stuart Davis painting Hot Still-Scape for Six Colors ‒ 7th Avenue Style. In this pairing, she juxtaposes the Davis painting that she admired as a child growing up in her family home, with a scene from the 1940 film The Philadelphia Story (pictured below, both from 1940). 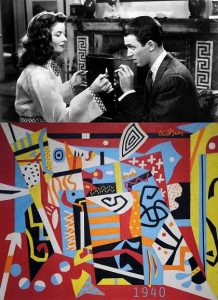 The family eventually sold the painting some 25 years later. Ultimately, the painting was donated to the Boston Museum of Fine Art. Years later, Lautenberg was reunited with the painting when she visited the museum and was heartened to see it was still in the same frame it had during the many years when it hung over their family fireplace.

This new exhibition in South Florida, Art Meets Hollywood, opened at the Boca Raton Museum of Art concurrently with another celebration of films and artmaking, Art of the Hollywood Backdrop: Cinema’s Creative Legacy. Both shows together at the Museum are a dream come true for cinephiles.

Pictured above from the Museum exhibition is Lautenberg’s “1952,” her combination of a scene from Singin’ in the Rain with Yayoi Kusama’s painting titled The Sea (both from 1952).

This year marks the 70th anniversary of Singin’ in the Rain, one of Hollywood’s most beloved films of all time. It was directed by Gene Kelly who also starred in this Hollywood classic. In honor of the film’s milestone anniversary, Warner Bros. Studio is releasing a new 4K Ultra HD version of the classic movie.

At the opening reception for Lautenberg’s exhibition at the Boca Raton Museum of Art, one of the special guests of honor that evening was Patricia Ward Kelly (the widow of Gene Kelly). She is the Creative Director of the Gene Kelly Legacy Project in Los Angeles (pictured above).

Lautenberg and Kelly discuss the visual connections between the film and the painting in this excerpt video here, recorded at the Museum on the night of the exhibition opening.

REVIEW: ‘The Courage to Face COVID-19’