From Myanmar to US, disinformation floods social media

TOKYO — A 24-year-old woman living in Mandalay suffered deep lacerations in mid-February after a stranger denounced her as ethnically Chinese Burmese and “not of our number.”

Nwet Sandi Kyaw, is not alone. Since the military coup on Feb. 1, Myanmar has been hit by violent upheaval, and amid the chaos, Burmese of Chinese descent have been called out for myriad perceived sins — not taking the side of the people, not participating in public protests, and paradoxically, not fighting on the side of the military.

Much of the chatter is taking place on Facebook, used by 90% of those active on social media in the country. It has been awash in negative comments about China due to an unfounded rumor alleging that Chinese engineers had come to Myanmar to shut down the internet at the request of the military. The rumor started circulating in early February.

Within days, the falsehood triggered a spate of attacks against Chinese Burmese and businesses.

For Oliver, a member of a citizens group that stands up for freedom of expression, the attacks are giving him a sickening sense of deja vu. In 2018, social media posts led to large-scale persecution of Rohingya Muslims, a minority ethnic group, provoking an international outcry. Oliver criticizes Facebook for failing to deal with hoaxes and misinformation.

Facebook’s fake news moderation system does not work, he says, because the program “only acts when ‘fake news’ creates harm.” 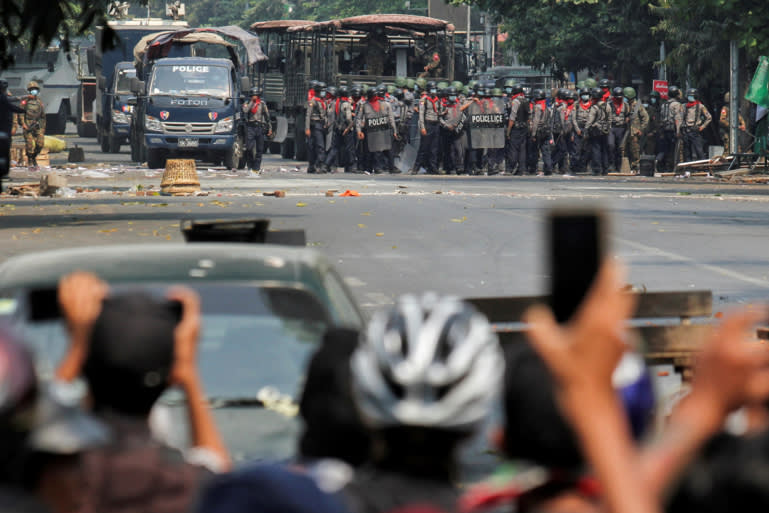 Myanmar’s military confronts demonstrators. Since the coup almost four months ago, social media platforms have been used to spread the word about protests, but the sites are also spreading confusion.   © Reuters

We Check Community, a local fact-checking organization, warns that the situation concerning the spread of disinformation on social media, especially on Facebook, is now more serious than ever.

So-called “information pollution” has emerged as the scourge of an era when social media has become ubiquitous, posing a serious threat to democracy, which depends on the freedom of speech and free access to information.

Big technology groups like Facebook and governments around the world are struggling to deal with the increasingly serious problem of online disinformation, from fake political posts to incitement of sectarian violence.

The U.S. is suffering badly from the poisonous effects of the proliferation of disinformation. The American population’s trust in their own government is dwindling, according to the latest surveys by Edelman, a global communications company. Only 42% of Americans now trust their government, putting the U.S. in 19th place in terms of public trust in government among 28 countries surveyed, the Edelman Trust Barometer 2021 showed.

In contrast, 80% of the Chinese population puts trust in the government, and over 60% trust others. The higher levels of public trust in government in China is ironic, given that it is an authoritarian country that exercises tight internet censorship and restricts freedoms.

The U.S. has long been the envy of the world in terms of its wealth and vibrant democracy, offering widespread freedom to its citizens. However, the country is now grappling with the corrosion caused by social media posts that incite hatred and violence and worsen societal divisions.

Following the trading frenzy earlier this year in shares of struggling video game retailer GameStop, a trader who has been viewed as a driving force behind the short squeeze, was called to testify before the U.S. Congress. In his testimony, Keith Gill said, “I did not solicit anyone to buy or sell the stock for my own profit,” rejecting allegations that he played a key role in the frenzy.

However, Gill reaped a hefty profit worth $19 million in the troubled video game company after months of talking up the stock on his YouTube channel and on a Reddit forum. Gill’s behavior bordered on a dubious attempt to incite investors to pile into the stock. It symbolizes a new type of challenge for regulators. In fact, Gill’s stock market play, in which social media played a key role, has apparently spawned many potential copycats.

The proliferation of disinformation could undermine the credibility of the global online community itself. But strongly regulating the internet is not an option for free democracies.

Hester Peirce, a commissioner on the U.S. Securities and Exchange Commission, stresses the benefits of social media and is cautious about criticizing their role in markets.

“Social media [are] an important tool allowing individuals to participate in new ways in hobbies, in work, in personal relationships and in politics,” Peirce told Nikkei. “We regulators as well as market commentators should be careful to avoid sending a message that there is a problem with retail investors using new technology to find new ways to participate in our financial markets.”

In Myanmar, social media have also helped cure the wounds Kyaw suffered after being attacked by her fellow citizens.

Following news reports about many Chinese Burmese being killed in clashes with the military in March, many citizens posted messages apologizing to the ethnic group. “We made a mistake, sorry,” one said. “We are all involved in this revolution, so we should not discriminate between people.”

There has been a wave of calls on social media for Myanmar citizens to unite in order to overcome the current crisis.

While individual messages can get drowned out in the sheer volume of activity on social media, the platforms still offer effective means to share support and encouragement during natural disasters and crises.

The world is facing a complicated challenge: It must find ways to make effective use of these powerful communication tools while controlling the risks they pose.