BEIJING — Misinformation about the origins of the coronavirus pandemic is circulating heavily in Chinese cyberspace, where a normally aggressive censorship regime has been staying its hand in an apparent effort to blunt the domestic impact of a forthcoming American report.

One conspiracy theory that has gained traction has the disease originating in Italy.

“Extra: Italy is the source of the novel coronavirus, prime minister reveals today,” reads the headline of an online item that went viral in June.

The piece claims that Italian Prime Minister Mario Draghi admitted that the virus was spreading in his country during the summer of 2019 — months before the first actual COVID-19 cases were reported in the central Chinese city of Wuhan. The story also falsely included material attributed to a globally reputable news source.

This comes as the U.S. intelligence community draws close to wrapping up a 90-day review ordered by President Joe Biden in late May.

Earlier this month, this reporter received a video clip from a source who used to work for a Chinese-government-affiliated institution. Purportedly surveillance camera footage from a Wuhan subway train, it shows what appears to be a Westerner removing his mask and rubbing his saliva on a handrail.

“American spreads virus during Military World Games,” the subtitles read, referring to an autumn 2019 sporting event in Wuhan. But the claimed location and timing had not been confirmed, and there were no grounds for linking the incident to the U.S.

Yet the video has inflamed passions on social media, with such sentiments as “the Americans are truly awful” freely expressed.

Under China’s censorship regime, online content inconvenient to the government is quickly removed. Links to deplatformed material cannot be opened or shared. But the fake news described above remains readily available.

The origins of the coronavirus are an extremely sensitive subject for the government leadership under President Xi Jinping. Chinese officials fear that the U.S. intelligence report will be used as a basis for seeking damages. Communist Party brass could also come under heavy domestic criticism.

Elements of the Chinese government appear directly involved in the spread of at least one piece of fake news.

Starting in late July, such official outlets as the People’s Daily newspaper have cited a Facebook post by a user claiming to be a Swiss biologist named Wilson Edwards. The user said the U.S. was attempting to invalidate the conclusions of an earlier study, conducted jointly by the World Health Organization and China, that deemed a lab leak in Wuhan to be extremely unlikely. 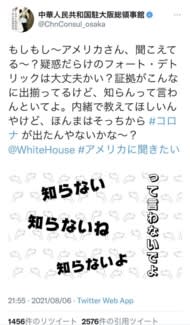 The Chinese consulate-general in Osaka derisively alluded to the idea that a U.S. military lab should be investigated for leaking the coronavirus in this tweet dated Aug. 6.

On Aug. 10, the Swiss Embassy in Beijing said no Swiss biologist named “Wilson Edwards” exists and called on the Chinese media and internet users to stop disseminating that false story.

There is evidence that Chinese officials are moving to steer the narrative in their direction. On Aug. 6, the Chinese consulate-general in Osaka tweeted from its official account a post suggesting that Fort Detrick, a military lab in the U.S. state of Maryland, should be investigated over a possible leak.

“Is everything okay with Fort Detrick, given the mountain of allegations?” reads the tweet, written in the local Japanese dialect in Osaka. “Are you sure the coronavirus didn’t really come from there?” it asks.

On Aug. 13, Vice Foreign Minister Ma Zhaoxu tried to redirect suspicions on the origins of COVID-19 back to the U.S. at a briefing of diplomatic envoys.

China may be employing advanced technology to step up efforts to sway international public opinion.

“A sprawling network of more than 350 fake social media profiles is pushing pro-China narratives and attempting to discredit those seen as opponents of China’s government,” the BBC reported early this month, citing a study by the U.K.-based Center for Information Resilience. Many of the fake profiles use photos generated by artificial intelligence, it said.

This Bento Lunchbox Finally Convinced Me to Bring Leftovers to Work