Exclusive: A First Look at the Restaurant Bringing New York-Style Pizza With an Artisanal Twist to LA

Chef Christopher Keyser has been thinking a lot about the New York-style pizza he wants to serve in Los Angeles.

At Pasadena’s U Street Pizza, which restaurateur Marie Petulla and Keyser will open in April next to their popular Italian restaurant Union, the formula is creating New York-style pizza with artisanal riffs and California-grown toppings. Keyser spent a few weeks just dialing in U Street’s dough, baking around 40 to 50 pizzas a day with only cheese and sauce in the restaurant’s PizzaMaster deck oven.

The dough is made with a blend of two flours (Organic Skagit and Glacier Peak) from Cairnspring Mills, a supplier in Washington’s Skagit Valley that is also used by baking heavyweights including Tartine. The two flours serve different purposes. The Organic Skagit flour, which has less protein than typical flour, makes the “cracking crispiness a lot easier to achieve,” Keyser says. The Glacier Peak flour, meanwhile, gives the dough “a really wonderful red wheat flavor.” U Street’s dough involves two days of fermentation, which intensifies the flavor.

“It tastes like pizza, but it also tastes like a really nice bread,” Keyser says. “The crust is really the best part.”

Keyser makes pizza sauce with Alta Cucina tomatoes from Northern California. He gets pork from Marin Sun Farms—also NorCal-based—and uses it to make fennel sausage. U Street’s sausage pizza will include a mix of blistered peppers that Keyser plans to buy from different California farms that could include Weiser Family Farms, JF Farms, and Coleman Family Farms. Keyser also shows his love for California ingredients by how he finishes certain pizzas with Fiscalini cheddar from Modesto instead of Parmesan cheese

“We do it because the cheddar is better than Parm in my opinion,” Keyser says. “I never thought I would say that. But Fiscalini makes a really great 18-month cheddar that has almost a Parm quality to it. It even has the same, like, salt crystals in it.”

He’ll deploy the Fiscalini cheddar on his white clam pie, which is inspired by the famous clam pizza at Frank Pepe in New Haven, Connecticut. But like with everything on the menu at U Street, Keyser is putting his own spin on the clam pie by using both cream and mozzarella cheese and also by creating “what’s almost like a clam salsa verde” with chopped clams, lots of parsley, lots of garlic, lemon zest and lemon juice. 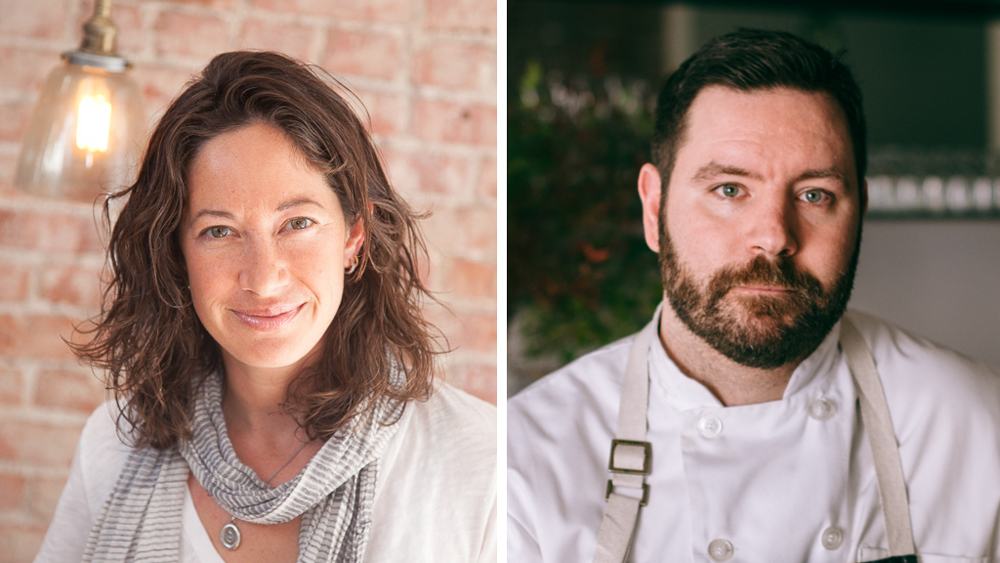 Petulla and Keyser are opening next to their Italian spot, Union.

Beyond New York-style round pizzas, U Street will have square pies. For Petulla, who has long wanted to have a pizza place, it harkens back to eating countless square pies baked by her father. With U Street, she and Keyser are opening a place that reminds them both of childhood.

“My father is first-generation Italian from the East Coast,” Petulla says. “I grew up with square pies that my dad used to make with bread dough. I think that’s what’s so exciting about working with Chris: The crust itself is so reminiscent of home. Chris nailed it.”

“It’s the same dough, except just more of it,” Keyser says of the square pie.

Beyond pizza, U Street will serve crowd-pleasers like Caesar salad, pork-ragu arancini and mozzarella en carozza.

“I just love New York and that style of food and that old Italian-American history it’s got going on,” Keyser says. “I ate at a lot of red-sauce joints growing up. I thought it would be pretty cool if you could just bring that out here. Meatballs, good pizza, red wine.”

That said, Keyser is constantly looking for new ways to put a California stamp on U Street. He’s working on a pizza that will showcase a variety of Petaluma Creamery cheeses. He also knows that people in Los Angeles like spicy food, so he plans to play around with dried chiles on different pizzas. Petulla welcomes the experimentation.

“I think this restaurant is just going to be a lot of fun,” Petulla says. “Pizza is fun. That’s what we all walk around saying. It’s just fun. There’s a lot of playfulness that comes with it.”

“When fruit gets really good at the farmers market, we’ll use whatever they have,” says Keyser, who’s excited about trying out different California berries in U Street’s soft-serve.

Businesses fret as Canada extends ban on travel with US, Trudeau stands firm

The jewels of Napoléon\'s adoptive daughter, Princess Stephanie Napoléon, for sale at Christie\'s