It is getting late, early, for Fumio Kishida’s stint as Japanese prime minister.

Sure, it is too soon to know if he will manage to contain COVID-19, remake the economy and protect Tokyo’s leadership role in Asia. But one key constituency may already be making a “fail” call: stock investors, many of them of the overseas variety. We should listen; they make a good point.

It is easy to understand why #KishidaShock is trending on social media. The Nikkei Stock Average surged to 31-year highs after former Prime Minister Yoshihide Suga announced his resignation in early September. The bet: that after 12 months of drift and timidity, Japan would name a focused reformer to succeed him.

Instead, we got a soft-spoken “consensus builder” who is as establishment as one finds in the ruling Liberal Democratic Party. LDP power brokers call Kishida the “safe” choice, as if that is a good thing. Is safe really what an aging economy being eclipsed by China needs?

Investors wanted Taro Kono, who until recently was the LDP’s vaccination czar. Kono, in their collective imagination, is a maverick leading the charge to digitalize a stubbornly paper-based economy where fax machines still sell briskly.

One can debate whether Kono is the disrupter of investor imaginations. But the aggressive continuity Kishida signifies can be seen in his choice of a cabinet sure to leave the economy neither shaken nor stirred.

Taro Aso hardly lit the world afire as finance minister for the past nine years. Maybe his brother-in-law, Shunichi Suzuki, can do better increasing competitiveness. Or not. The folks happiest about Japan’s new cabinet are investors shorting the Nikkei. This should be a loud wake-up call for the LDP.

Reboot, anyone? The mere suggestion might sound ridiculous considering Kishida is barely a week into his premiership, and 18 days away from leading his party to an Oct. 31 election that the LDP is sure to win. Still, investors writing “sell” tickets are an early warning that Kishida already seems destined for replacement 12 months from now. It makes you wonder if political benefactor Shinzo Abe and his cronies learned any lessons from their 2012-2020 tenure.

Kishida fell into the tax-hike trap that marred Abe’s economic legacy, and has already flip-flopped on talk of capital gains tax increases. When your two biggest ideas out of the gate are doubling down on nuclear power and tax increases, voters have even more reason to worry than investors.

Kono, remember, hoped to pivot to Japan becoming a renewable energy and digital economy powerhouse. Kishida’s pivot seems to be back to the 1990s. Or, depending on your reading, toward South Korea.

Anyone keeping score in North Asia will be unimpressed by Kishida’s talk of a “new type of Japanese capitalism.” In Kishida’s telling, this means channeling more wealth to households and addressing Japan’s widening income gap. And that sounds great.

Until you consider that South Korea’s President Moon Jae-in has been running this same play since 2017 — and failing. Though Moon calls it “trickle-up growth,” the common thread between the strategies is vague talk that will accomplish little, if anything.

Consider it Kishida’s version of “buy my Abenomics” or make Japan’s women “shine.” Hollow slogans that posterity will not much remember. The hope, of course, is that Kishida will surprise us — “shock” is already taken. Yet nothing about his cabinet picks suggests a desire to upset the status quo. 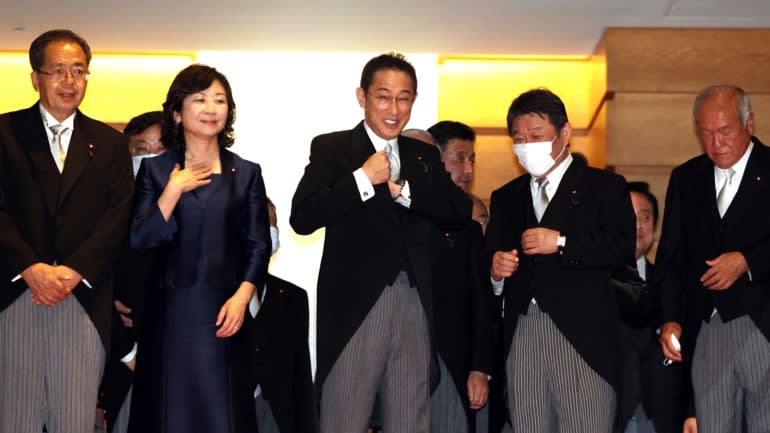 Fumio Kishida, center, shares a smile with his cabinet members at the prime minister’s official residence on Oct. 4; the folks happiest about Japan’s new cabinet are investors shorting the Nikkei Stock Average.   © AP

Given the disarray among opposition parties, the looming general election is not a big challenge for the LDP. But Kishida’s real foe is the clock. Though Abe lasted nearly eight years, the six previous governments each lasted 12 months. So did Abe’s latest successor, Suga.

Abe’s mentor Junichiro Koizumi lasted five years, but the fast-turning revolving door before him saw a flurry of governments come and go. But Abe shattered the myth that if only a Japanese leader had enough time in office, big changes would follow.

After 2,821 days in office, Abe achieved little in terms of altering Japan’s longer-term trajectory. His moves to tighten corporate governance were helpful. Posterity may also be kind to Abe’s decision to hire Haruhiko Kuroda as Bank of Japan governor. But that sales tax hike in October 2019 will be remembered about as well as Abe’s obsequiousness toward former U.S. President Donald Trump.

Abe ignored economists’ warning that hiking taxes to 10% from 8% would be a mistake. The recession that followed put Japan on remarkably bad footing as the pandemic arrived.

They also needed to generate growth organically, not merely prod the BOJ to print more yen. When Abe did get bold, it was pushing through two sales tax increases — in 2014 and 2019 — not cutting red tape.

Kishida is already reminding us that this pattern seems set to continue. Along with talk of tax hikes, his finance minister is already angling to weaken the yen to help exports. Longtime observers of the LDP will not be shocked, shocked to find the 1990s are back.