Rupa Subramanya is a researcher and commentator. She is a distinguished fellow of the Asia Pacific Foundation of Canada and the co-author of “Indianomix: Making Sense of Modern India.”

During the first wave of the COVID-19 pandemic in 2020, India implemented one of the world’s harshest lockdowns.

We know from anecdotal evidence that thousands, perhaps even hundreds of thousands, or more workers were displaced, leading to the largest exodus of humanity India has seen since partition in 1947. The impact on livelihoods and incomes, and consequently on poverty, was immediate and dramatic.

A study by the Azim Premji University in May of this year documents that fully 230 million Indians slipped back into poverty due to the impacts of the pandemic and resultant lockdown. This reversed years of gains in pulling people up from poverty into the middle class as gainful employment opportunities vanished in the wake of the lockdown.

With thousands of small businesses shuttered and larger businesses unable to operate due to supply constraints, many urban daily wage workers lost their jobs and attempted to return to their homes in the countryside. Some made it back to precarious livelihoods at home, while others were stuck in no man’s land with no income and no shelter.

As catastrophic as the situation was, new research suggests that the impacts on women were especially devastating. In a new research paper in Feminist Economics, sociologist Sonade Desai and her co-authors document the gendered impact of the lockdown. Using data from a monthly employment survey between March 2019 and May 2020 allowed them to compare before and after the lockdown.

Looking at total employment, men exhibited a larger decline in the probability of having a job than women, although both groups suffered.

A principal cause is that women’s work tends to be concentrated in the self-employment sector — that is, activities such as working in the fields and working around the house, including cooking, cleaning and raising children. Most of this work is unpaid to begin with and does not show up in official statistics. 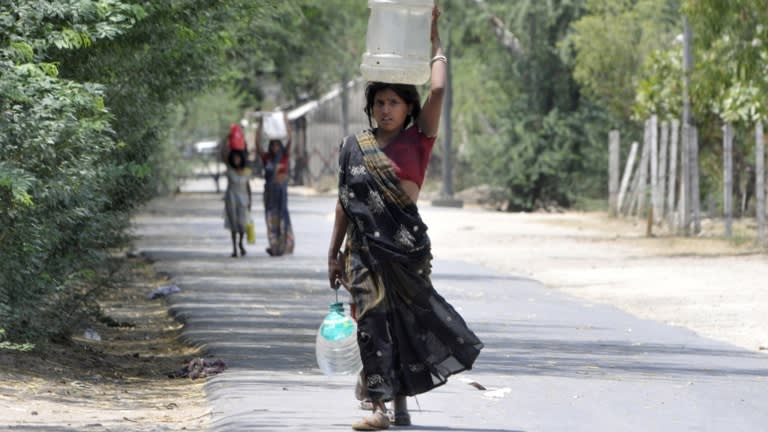 A woman carries water containers in Noida in May 2020: women’s work tends to be concentrated in the self-employment sector.   © Hindustan Times/Getty Images

But the impact on women was much more dramatic when looking only at paid work, with a predicted probability of employment falling by a whopping 72% for women, as against only 40% for men. In other words, when wage laborers were laid off, it was women who bore the brunt.

The findings of the Desai study are mirrored in a new working paper from the Azim Premji University led by Rosa Abraham.

Using a different data set and statistical approach, Abraham and her research team found that women who were in the workforce before the pandemic were seven times more likely to be laid off than men. And when it came to those who had already lost their jobs, women were 11 times more likely than men not to return to work.

Paradoxically, the study found that education shielded men from job losses, yet being better-educated meant that women were more likely to lose their jobs than men. This asymmetric impact of job loss, hitting women harder than men, is one piece of a larger problem plaguing India, which has low female participation in the labor force compared to other major economies, including developing countries.

According to an Indian government report, during the period from July to September 2020, the female labor force participation rate fell to 16.1%. As bad as that is, it is still slightly better than the previous quarter — in the midst of the lockdown — when it dropped to 15.5%.

While the pandemic made things worse, there has been a long-term trend of women declining in the labor force in India, going back more than a decade. According to World Bank data, the female labor force participation ratio was as high as 26% in 2005 before dropping all the way to 20.3% in 2019, prior to the lockdown.

The low participation rate of women in the workforce in India, as compared to similar countries, is sometimes taken as a sign of success. It is argued that as family incomes rise, women sometimes drop out of the labor force to spend more time raising children or looking after elderly parents.

There is ample anecdotal evidence that this is the case for upper-income women, often attributed to what sociologists call “motherly guilt” or “daughterly guilt” — although whether this is something to cheer is questionable.

However, women’s participation in agriculture and other rural activities is actually ticking up, according to recent data. This is not a good development, as it suggests that rural women — especially poorer women — are not entering the classes of salaried workers but are stuck performing low-wage or unpaid work in the fields or at home to help fill the income gap.

This is another unfortunate and insufficiently talked about side effect of the economic downturn caused by the pandemic.

As India begins to pick up the pieces, with the worst of the pandemic receding and vaccination rates rising steadily, rebuilding India’s economy and pulling the newly impoverished back up into the middle class is a crucial policy challenge made more complex by its uniquely gendered nature and the fact that, as in most crises, it is women who bear the brunt and have the hardest time recovering.

Maeda to be removed from JPX-Nikkei Index 400 on Oct. 1