THIMPHU — High up in the mountain regions bordering Tibet the inhabitants of Laya, one of the highest settlements in the Himalayan kingdom of Bhutan, are still coming to terms with the death of 10 of its community members who were killed in a mudslide in one of the worst tragedies to hit the highlands.

Members of the nomadic community were deep in the mountains, a day’s walk from their village, collecting Cordyceps, the highly valued wild medicinal fungus. They had camped at the edge of a slope, above the tree line, when tragedy struck in June.

It had rained continuously for three days in the area prior to the tragic incident. In the middle of June, the area received 23mm of rainfall, almost twice that of the same time last year, according to data gathered by the National Centre for Hydrology and Meteorology (NCHM) in Thimphu.

But Lhakpa Tshering, the local leader of the nomadic community of 2,000 people, who traditionally rear yaks for a living, said that heavy rainfall was nothing unusual and was expected at this time of the year.

Yet experts with the National Environment Commission (NEC), Bhutan’s lead environment agency, believe the slide was triggered by an extreme weather event, a direct result of climate change. “Extreme weather events have intensified and effects of climate change are clearly visible in the high Himalayan regions,” said Tshering Tashi, the commission’s air and climate division chief.

At around the same time as the incident in Laya, torrential monsoon rain in neighboring Nepal triggered a glacial outburst near the border of Tibet, killing 10 people and destroying roads, bridges and settlements.

Earlier in February, a flash flood hit India’s northern state of Uttarakhand, bordering Nepal, killing more than 70 people and destroying two hydropower projects. The Geological Survey of India attributed the flood to a huge mass of rock and snow crashing into the valley. 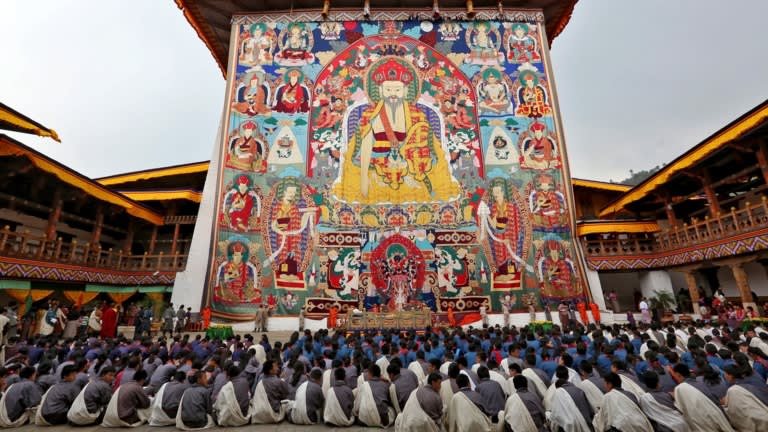 At a time when the battle to contain COVID-19 has blanketed other concerns, the tragic incident in Laya comes as a chilling reminder of the looming danger high up in the mountains from climate change; rising temperatures and higher precipitation potentially triggering glacial lakes to burst and causing a catastrophic flood downstream.

Of the 17 glacial lakes in Bhutan identified as potentially dangerous, Raphstreng and Thorthormi lakes, which are located at more than 4,400 meters above sea level and are the source of the Phochhu river that flows through Punakha in western Bhutan, pose an imminent threat, according to experts.

Raphstreng is a fully formed lake, 1 km long and 110 meters deep. A thin moraine wall separates it from the larger Thorthormi lake, which is made of blocks of ice and water and stretches for 3.4 km. Experts fear the moraine wall could be breached under increasing pressure from ice melt in Thorthormi, considered Bhutan’s most dangerous glacial lake. 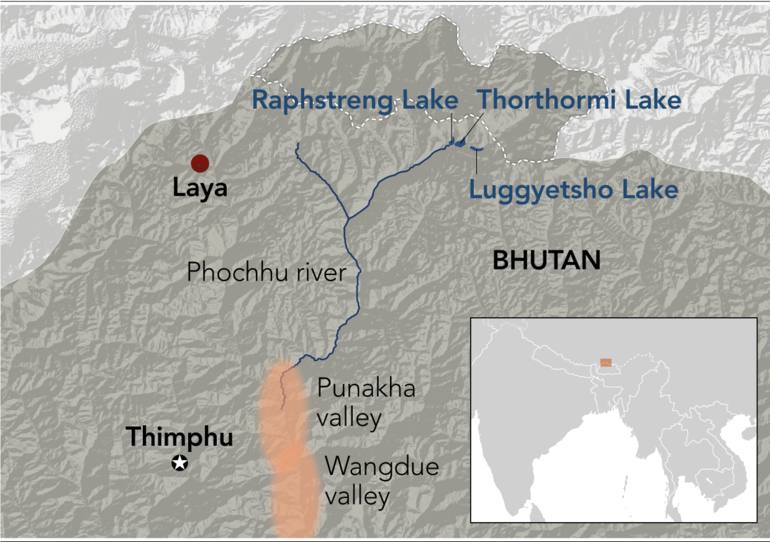 This could lead to a catastrophic flood downstream releasing 53 million cubic metres of water, almost three times that of glacial floods that occurred in 1994. It is estimated the flood would affect 117 buildings, close to 400 people, 16 historical monuments and other infrastructure. Besides submerging half the fertile valleys of Punakha and Wangdue and putting in grave danger the historic Punakha Dzong, the district administrative center, and three hydropower projects downstream, a flood would also destroy the habitat of the critically endangered white-bellied heron on the Phochhu riverbanks along with aquatic species like the Mahseer fish.

Any new flood waters would travel faster than previous ones due to the pathway that was cleared by the earlier flood, which took just seven hours to reach Punakha valley.

The 1994 glacial floods in Punakha killed 20 people, washed away 35 yaks, suffocated thousands of fish and partially damaged the Punakha Dzong. It also affected 91 households in Lunana and damaged 964.74 acres of pasture lands.

The 1994 floods happened when Luggyetsho lake, adjacent to Thorthormi, burst its banks after a smaller lake drained into it, sending 18 million cubic meters of water crashing down the mountainside following the course of the Phochhu river. The Phochhu joins the Mochhu, another glacial river, in the Punakha valley to form Punatshangchhu, one of Bhutan’s major rivers that flows through four districts. Flooding would destroy the habitat of the critically endangered white-bellied heron on the banks of the Phochhu river in Bhutan.   © AP

Since 1994 several measures have been undertaken to reduce the hazard posed by the glacial lakes. The natural outlet of the Raphstreng lake was widened and deepened between 1996 and 1998. A decade later Bhutan took on its most significant project to date to lower the water level of Thorthormi and widen its natural outlet.

Over four years from 2009, 300 workers worked from June to September widening the natural outlet to 100 meters using sledgehammers, ropes and crowbars. The $4.7 million project lowered the natural outlet by five meters, releasing an estimated 17 million cubic meters of water over the course of the process, almost equal to the whole of the 1994 flood. The project also reduced erosion on the moraine wall.

The project was in response to a study by Austrian experts from the University of Vienna that suggested the overflow of Thorthormi was imminent. No such major hazard-reduction initiative has been undertaken since then but in June 2019, a flood warning was issued for the Punatsangchhu basin when the waters of Thorthormi rose by almost 2 meters, causing it to overflow into a smaller lake downstream that burst and washed away a small bridge in Thanza village, the nearest settlement to the lakes.

“Prior to the incident, temperatures had risen for three months between April and June,” said Karma Toep, NCHM’s senior glaciologist. “After the incident we did a visual assessment and the moraine dam had endured erosion on both sides.”

The senior glaciologist agreed that weather patterns were changing and glaciers were melting at a rapid pace. “In 2002, I could walk on the surface of Thorthormi lake because it was all ice, now it’s not possible as much of the ice has melted and formed islands,” said Karma Toep, who has been to the lakes more than 23 times over the past two decades. “But there are other factors beyond rising temperatures that lead to melting of ice in the lakes.”

Kaka, the local leader of Lunana, home to settlements closest to the lakes, said the government should carry out another hazard-reduction project. “The lakes are a constant threat and weather patterns are changing,” he said. “We used to receive snow by October, now it only comes in January.” 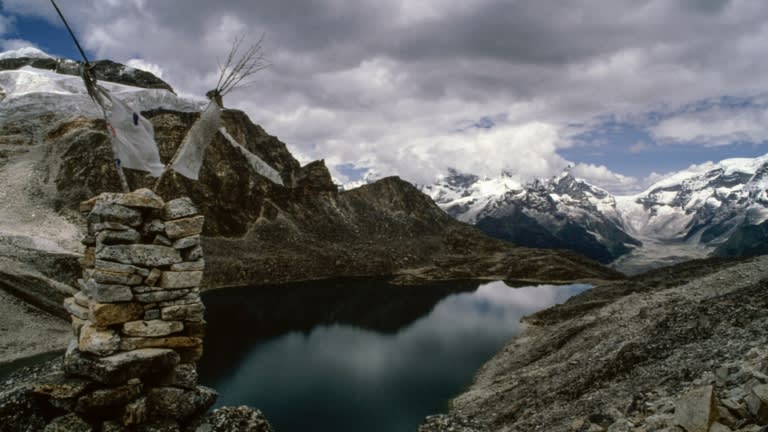 Thanza, the largest village in Lunana, is about 3.5 km downstream of Raphstreng and Thorthormi lakes and would be the first to be hit in any flood.

But Karma Toeb said that there are no plans to carry out similar hazard-reduction projects due to the huge logistical challenges involved. Besides, the water level in Thorthormi is not expected to reach its previous level since the outlet itself has been lowered and widened.

“Our focus has now shifted from hazard reduction to strengthening the early warning system,” he said, adding that flood forecasting instruments, an upgrade from the current flood detection tools, would be installed in the lakes and can capture any signals arising from earthquake tremors, avalanches and rock falls. The government has in place a national weather and flood warning system to monitor water levels in the lakes and rivers round the clock.

NCHM has also proposed sub-surface investigation at the moraine dam as a huge ice core has been detected which could weaken the dam if it melts.

The department of disaster management, along with NCHM and district officials, have prepared a hazard zonation map along the banks of the Punatshangchu river. But some new buildings are still being built in the red zones. “We are not able to carry out relocation [of these settlements] as so many policy issues will emerge since most of the land along the banks is privately owned,” said Thinley Norbu, the chief program officer with the department of disaster management.

Karma Toep said that all past activities were geared towards reducing the flood hazard, but that this did not reduce the risk. “Despite all that we have done, we are still vulnerable, and the danger of catastrophic flooding could happen anytime,” he said.