U.S. Vice President Kamala Harris’ maiden trip to Southeast Asia meant to assuage the region of America’s partnership could not have been set more awkwardly against the backdrop of the country’s messy withdrawal from Afghanistan.

Addressing this dissonance at the start of her speech in Singapore, Harris underlined the need for the United States to continue pursuing its interests in other regions even as it addresses developments in Afghanistan. She is right, of course.

The U.S. is integral to the Asia-Pacific, and its future in the region is inextricably tied to its partners and allies in Southeast Asia. The series of in-person and high-level U.S. engagements over the last few months bears out this recognition and marks a return to the early years of Barack Obama’s first administration, which witnessed a flurry of U.S. cabinet visits to Southeast Asia.

Harris’ trips to Singapore and Vietnam this week follow Secretary of Defense Lloyd Austin’s own visits to those same countries only a month ago. Her message of cooperation, multilateralism and a shared vision of peace and stability echoes that of others in the Biden administration. 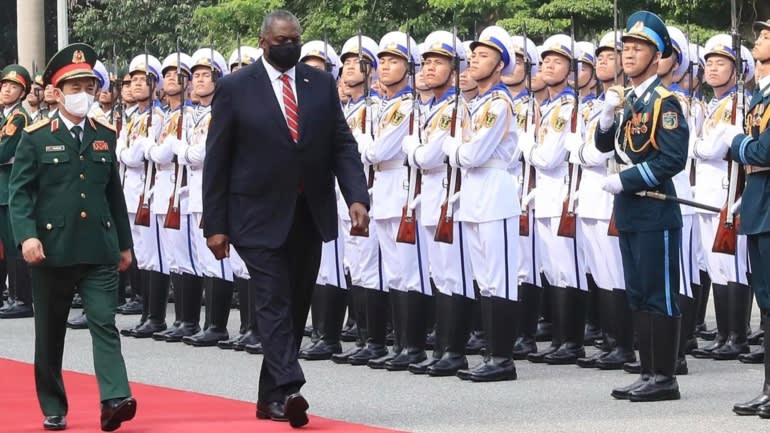 Secretary of Defense Lloyd Austin inspects an honor guard in Hanoi on July 29: the series of high-level U.S. engagements marks a return to the early years of Barack Obama’s first administration.   © VNA/AP

In that sense, it was not substantively new. But after four years of wildly unpredictable foreign policy and abrasive lectures on China under the Trump administration, this staid undertone of partnership is a welcome contrast, and one Southeast Asia can get behind.

Indeed, the revived U.S. attention toward the region is an encouraging sign that America has not only been listening but that it intends to honor its commitment to expanding re-engagement with Southeast Asia. Harris’ attention to supply chains, the climate crisis and cybersecurity while in Singapore reflects this.

And while the United States’ offer to host the Asia-Pacific Economic Cooperation forum in 2023 is not quite the sustained, comprehensive economic agenda that Southeast Asian countries — some of which still bear Trans-Pacific Partnership scars — are hoping for, the proposal is still a refreshing signal.

It is, however, early days in the Biden administration, and there remains uncertainty about the nature and direction of U.S. policy, especially given unfolding challenges competing for U.S. attention and resources. As Harris continues her trip to Hanoi, the remarkable reality of how U.S.-Vietnam relations have evolved since the war is undeniable. Yet it will be shadowed by the uncomfortable parallels already drawn between American evacuation operations in Afghanistan now and in Vietnam in the late 1970s.

The blow to U.S. credibility in Afghanistan may give a reason for pause in Southeast Asia, particularly in defense of allies and friends in the South China Sea. But the U.S. pullout from Afghanistan is not so much a bellwether of commitment to partners as it is of the endurance of U.S. interests.

After all, in Southeast Asia, the U.S. has long been militarily and economically invested even when diplomatic ties have vacillated. The concern is whether engagement with Southeast Asia will be reduced to a singular point of focus to fit shifting U.S. priorities.

There is precedent for such apprehension. In the aftermath of the terrorist attacks of Sept. 11, 2001, Southeast Asia became the second front in Washington’s global war on terrorism. The emphasis on counterterrorism dominated U.S. relations with the region for two decades until America’s recent reprioritization of great-power competition.

If stabilization efforts in the near term in Afghanistan go awry, will Southeast Asia be back to the future with counterterrorism once more commanding attention, only this time with the overlay of major-power rivalry?

There are also questions about how Washington plans to engage with Southeast Asia as a regional collective. Notwithstanding repeated affirmations of U.S. commitment to Association of Southeast Asian Nations centrality, there has not yet been a cabinet-level trip to Brunei, which is the current ASEAN chair, or to Cambodia, which succeeds Brunei as chair; or to Indonesia, which hosts the ASEAN Secretariat.

The crucial importance of COVID-19 over the last few months has undoubtedly complicated travel plans, but Brunei has been one of the least affected countries in Southeast Asia since the start of the pandemic. The back-to-back visits of Harris and Austin to Singapore and Vietnam raise uncomfortable questions of a China subtext to Washington’s engagement strategy, despite the assurances of not forcing countries to choose.

Unfortunately, it also undercuts Harris’ language on inclusiveness. Rather than appearing to write off states as beholden to China, the U.S. should instead intensify reconnecting with them as a whole over the next year, particularly if it is serious about effectively engaging ASEAN, and on the Mekong subregion in particular.

Harris’ visit to Southeast Asia, on the backs of senior Biden administration engagement over the last few months, anticipates the return of a U.S. president to the East Asia Summit at the end of October after several missed opportunities in past years.

If President Joe Biden shows up this year, even virtually, he will no doubt be warmly welcomed in the region. His participation will lend credence to the idea that while Southeast Asian states are important individually, their centrality as a grouping matters just as much for the U.S. and regional interests.