China rushes to improve shots as unvaccinated give cold shoulder MANILA/SAO PAULO/DALIAN, China — Crowds thronged to a pharmacy in the Brazilian city of Sao Paulo on Sunday, eager to receive Pfizer’s coronavirus vaccine. Many quickly left as soon as it ran out, turning down the Chinese-developed Sinovac shots the store had in abundance.

A lack of confidence in Chinese vaccines worries officials in Beijing, which has offered shots to many Southeast Asian and South American nations as part of its diplomatic charm offensive.

Prodded by the government, Chinese vaccine makers are rushing to improve their products, whose efficacy pales in comparison with that of vaccines from American and European peers. The spread of infections in China also adds urgency to their task.

Sinovac Biotech’s CEO said this month that the company will soon submit applications in multiple countries for clinical trials on vaccines targeting the gamma and delta variants.

A Chinese trial of Sinovac’s current COVID-19 vaccine found that using a third dose as a booster “induces a strong immune response,” the company recently announced.

Separately, Sinopharm is developing a vaccine for delta, a Chinese newspaper reported Aug. 16.

“We aim to conclude our research as soon as possible so we can apply for an emergency use authorization,” said Duan Kai, who heads a Sinopharm research unit.

More than 2 billion doses have been administered so far in mainland China, where nearly 900 million people are now fully vaccinated. But delta cases have been surging since July, triggering a scramble to curb its spread.

China has aggressively engaged in vaccine diplomacy, supplying more than 100 countries. But many in these countries are holding out for U.S.- or European-developed shots, worried that Chinese vaccines will not work as well. 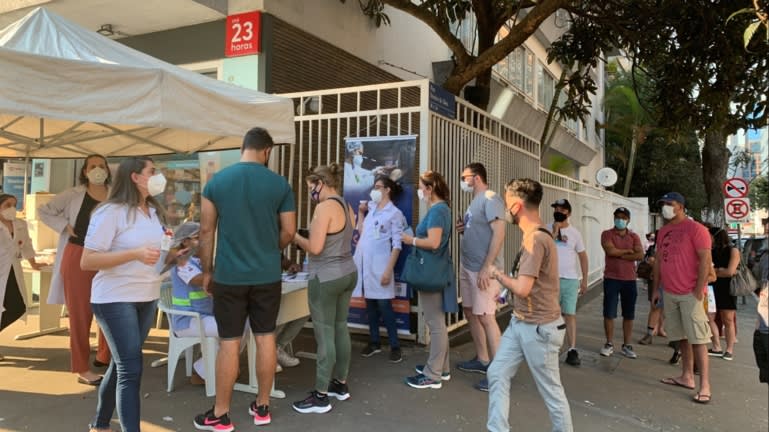 People seeking to receive the Pfizer shots flocked to a pharmacy in Sao Paulo.  (Photo by Naoyuki Toyama)

Social media has also been flooded by posts by people in Vietnam’s Ho Chi Minh City refusing Sinopharm shots, which became available on Aug. 10. Ho Chi Minh City Party Secretary Nguyen Van Nen announced Aug. 13 that Chinese vaccines will be administered only with the recipient’s consent, walking back a rule that kept people from choosing which shots to receive.

Sinopharm’s vaccine has an efficacy of about 78%, while Sinovac’s ranges from 50% to 84%, according to the World Health Organization — significantly lower than the 90%-plus of the Pfizer and Moderna shots.

“Chinese vaccines have an efficacy of about 60% against the delta variant,” infectious disease expert Zhong Nanshan said on Aug. 20 of the current offerings.

A vaccine’s low efficacy can have significant consequences for medical workers. Fully vaccinated doctors have died from COVID-19 in Indonesia, which obtained roughly 80% of its vaccines from Sinovac. The country began offering Moderna boosters to health care providers in July. Thailand will give Pfizer boosters to medical workers who originally received Sinovac shots.