HONG KONG — When the COVID-19 pandemic shrank Papua New Guinea’s economy, the country looked to what one top official branded the “devil” for answers.

In April, the PNG government reversed its long-running efforts to stop Canadian conglomerate Barrick Gold and Chinese partner Zijin Mining from running the Porgera gold mine in the highlands. It opted instead to renew its partnership with the companies and end its legal dispute with them.

“Though Barrick has taken us to court, we work in harmony. It’s better to work with the devil you know,” Mining Minister Johnson Tuke said at a signing ceremony for the refreshed agreement, according to Radio New Zealand. Barrick representatives in attendance laughed, the report said.

Not laughing are the activists and landowners who have long protested the mine and others like it. For PNG, mining poses a dilemma with livelihoods, natural habitats, diplomatic influence and billions of dollars on the line.

Tensions in the country are running high as communities demand accountability from the international giants that extract their resources. Looming behind the domestic considerations are larger geopolitical ones, as China’s Pacific presence grows.

Barrick and Zijin Mining have denied allegations by PNG’s mining regulator that they attempted to illegally export gold. Residents also complained they were not getting their fair share of the profits. Under the renewed deal, the PNG government has now taken a majority stake in the joint venture.

Anglo-Australian miner Rio Tinto is also under scrutiny, as is a long-planned Chinese-backed mine that would become one of the world’s largest. The World Bank, meanwhile, says resolving friction over mining is crucial for the country’s economic recovery.

Community and human rights groups have painted a grim picture of the Barrick-Zijin mine, its environmental track record and a security contingent Human Rights Watch accused in 2011 of using excessive force. Multiple cases of gang rape inflicted on women in the area were also alleged, leading to settlements in 2015. At the time, the Guardian newspaper quoted a Barrick spokesperson as saying, “We believe we have acted decisively to address the issue of sexual assault at the Porgera joint venture, both to remedy past harms and ensure such incidents do not occur again.”

More recently, last year, nearly 8,000 people backed by their provincial government sued the Chinese-owned Ramu NiCo mine after toxic slurry leaked into the nearby Basamuk Bay. The company’s vice-president, Wang Baowen, was quoted by Australian public broadcaster ABC shortly afterward as promising “to address any compensation” arising from investigations.

Also last year, Rio Tinto was accused of human rights violations related to claims that its defunct Panguna copper mine had poisoned waters during its operation from 1972 to 1989, leaving families with “no option but to continue to use the polluted rivers for bathing and washing,” according to Australia’s Human Rights Law Centre.

Rio Tinto last month finally agreed to fund an independent assessment of Panguna’s human rights and environmental impacts. “We take this seriously and are committed to identifying and assessing any involvement we may have had in adverse impacts,” the company said in a statement.

Then there is the big prize: the proposed Frieda River mine, which would span 16,000 hectares and is expected to yield gold, silver and copper worth an estimated $1.5 billion a year for more than 30 years. PanAust, an Australian-registered miner nabbed in what the market referred to as a “hostile takeover” by Chinese state-owned group Guangdong Rising Asset Management in 2015, is working to secure an operating permit. 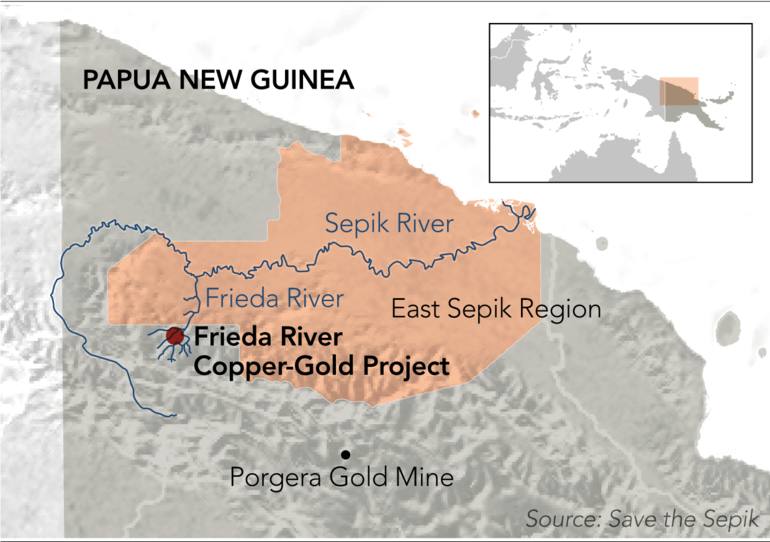 The Frieda and the snaking, 1,126 km Sepik River it flows into nourish those who live around them. For years, villagers have cut a path through tropical, tree-lined waters on their canoes. Recently, those canoes bear protest slogans like “stop Chinese Freida mine.”

Save the Sepik, a grassroots protest group, is determined to win this fight.

The river “provides food, water, shelter and air,” a Save the Sepik spokesperson told Nikkei Asia. “It is also the only means of transport for the river people.” The spokesperson said communities have a deep connection to the river as part of their identity.

“The river is not ours, it belongs to the future,” Emmanuel Peni of nonprofit Project Sepik wrote in a report published with the Jubilee Australia Research Centre. “We are only vessels of the Sepik spirit that dwells to celebrate and protect it. We will guard it with our life.”

The Frieda mine has met provincial resistance, with the East Sepik assembly voting against it last year. Others are questioning it, too. In July 2020, 10 U.N. special rapporteurs wrote to multiple governments including PNG’s and China’s, as well as the developers, expressing “concern that the project and its implementation so far appears to disregard the human rights of those affected.” A villager’s canoe bears the protest slogan “Stop Chinese Frieda Mine.” (Photo courtesy of Save the Sepik)

When approached by Nikkei Asia, PanAust declined to comment, only saying the group “continues to work with the communities and government of Papua New Guinea to fulfill its statutory requirements.” But even the company’s own environmental impact statement concedes it is “unavoidable that there will be material environmental and socio-economic impacts.”

The statement stresses the mine will also generate “a broad range of positive social effects and opportunities.” Expected benefits include boosting trade and investment and improving transport and connectivity.

Shane Macleod, a research fellow at the Lowy Institute and former PNG correspondent, said residents are becoming “more aware and more weary” of the environmental risks of mining projects, with 80% of PNG people living in traditional settings and “reliant on their local environment for their food, for their shelter.” But he said there is also tension between “wanting to protect the environment” and “looking for ways to derive economic benefits.”

Frieda mine supporters are “very much engaging with the idea that it will bring development” and employment, as well as much-needed infrastructure like electricity and roads.

A 3.8% decline in gross domestic product for 2020 has only added to PNG’s development challenges. The contraction was one of three factors the World Bank called a “triple crisis,” alongside the COVID-19 threat and political uncertainty. The bank warned in a January report that mining disputes and delays could “shake investor confidence further, with [a] knock-on effect on economic growth, employment, and loss of tax revenue and foreign reserves.” On the other hand, the bank called moves toward reopening the Porgera gold mine “encouraging” and said that “speedy resolution of these tensions related to mining projects will ensure higher inflows of foreign currency and taxation revenue, supporting a stronger economic recovery.”

China’s rising profile as a player on PNG’s mining scene adds another wrinkle, however.

Graeme Smith, a fellow at Australian National University’s Department of Pacific Affairs, sees a trend of Western miners gradually pulling out of PNG “because the risk profile isn’t quite worth it for them.” At the same time, China is eager to secure more supplies to meet its resource needs.

An editorial in Beijing’s Global Times earlier this year said China and PNG voiced “support for deeper cooperation” in fields including energy and mining, as well as farming and fisheries, during a meeting at the Chinese Embassy in PNG.

As traditional Pacific allies like Australia look on with unease, a number of island states have signed up to China’s Belt and Road Initiative, including PNG. While Samoa’s new Prime Minister Fiame Naomi Mata’afa has said she would scrap $100 million Chinese-backed port development plans, she also called China a “very good development partner.” The Solomon Islands has leaned into closer ties with China, severing relations with Taiwan in 2019.

Within PNG, views of China differ even at the top echelons. In June, the head of the defense force suggested China’s Pacific clout posed a security “challenge,” ABC reported. Prime Minister James Marape quickly contradicted him, saying he does “not perceive China as a security threat, but rather as an important development, investment and trade partner with shared values conducted under mutual friendship and understanding.”

The government may welcome more Chinese investment, but on a community level “there has been some pushback,” the Lowy Institute’s Macleod said, with concern around “the way environmental issues have been managed and the way relationships with landowners are managed.”

Unlikely to help China’s image is a report released this month by the U.K.-based Business & Human Rights Resource Centre, logging allegations of human rights abuses against Chinese companies overseas. The metals and mining sector drew the most complaints.

Marape himself has experienced how business and Beijing’s interests can intersect. When his government decided not to extend the Porgera gold mine lease last year, the head of the Chinese partner sent him a letter warning of a “significant negative impact on the bilateral relations between China and PNG, which is something we definitely do not want to see,” according to ABC. As Chinese President Xi Jinping takes a more “assertive” approach to foreign policy, China’s engagement in the region is “very much led and driven by its companies,” with the Belt and Road contributing to a push “to coordinate Chinese companies and Chinese diasporas to serve the state’s interests,” ANU’s Smith said.

PanAust’s Frieda mine ambitions may well serve those interests. Research by the International Copper Association cited by Mining Technology predicts a 22% increase in demand for copper as a result of the Belt and Road. China already consumes around 50% of the world’s copper and is one of the top markets for physical gold, noted Caroline Bain, chief commodities economist at Capital Economics, a U.K.-headquartered economic research consultancy.

China’s copper consumption is underpinned by its “investment-led growth model, which has had a focus on heavy industry and construction,” she said. “In addition, fiscal stimulus is usually directed at copper-intensive infrastructure projects.”

But first, the Frieda mine’s developers will have to convince landowners and affected communities “that it’s in their interests for the mine to go ahead” and environmentally sustainable, Macleod said. Over five decades after the discovery of the deposits, that remains a complex task. The harbor in Port Moresby, Papua New Guinea’s capital: The mining sector remains a crucial source of funds for the country’s development.   © Reuters

“Whose right is it to say ‘yes’?” can be its own issue, RMIT University’s Mudd said. “Sometimes the law doesn’t recognize the same thing the communities recognize.”

He pointed to the Ok Tedi gold and copper reserves, first mined in the 1980s, in an operation blamed for discharging millions of tons of poison waste, killing fish and trees. An executive of Australian giant BHP Billiton would later admit the mine was “not compatible with our environmental values.”

Mudd said the original agreements “were with the people where the mine is.” But downstream communities along the Fly River were excluded. “There wasn’t an expectation that the impact would go down the river that far,” he said.

Mudd also questions the economics of the Frieda project. “Myself and many others are still skeptical if Frieda River is really economic or not — let alone whether communities will support what is, in reality, a high-risk mining and infrastructure project,” he said. He argued that Frieda is likely to be less profitable than Ok Tedi and more challenging due to its remote location and limited surrounding infrastructure, requiring a bigger outlay.

PNG and its citizens face their own gamble — whether to risk more environmental consequences for the sake of revenue, employment and development. But if the Frieda mine goes ahead and progresses smoothly?

“It is likely you would get more Chinese interest in mining,” Smith predicted. “Because there’s still a lot to be tapped.”

Indonesia to allow restaurants, shops to reopen in Jakarta