The Octo Finissimo Ultra is just 1.8mm thick — and comes with its own engraved QR code. 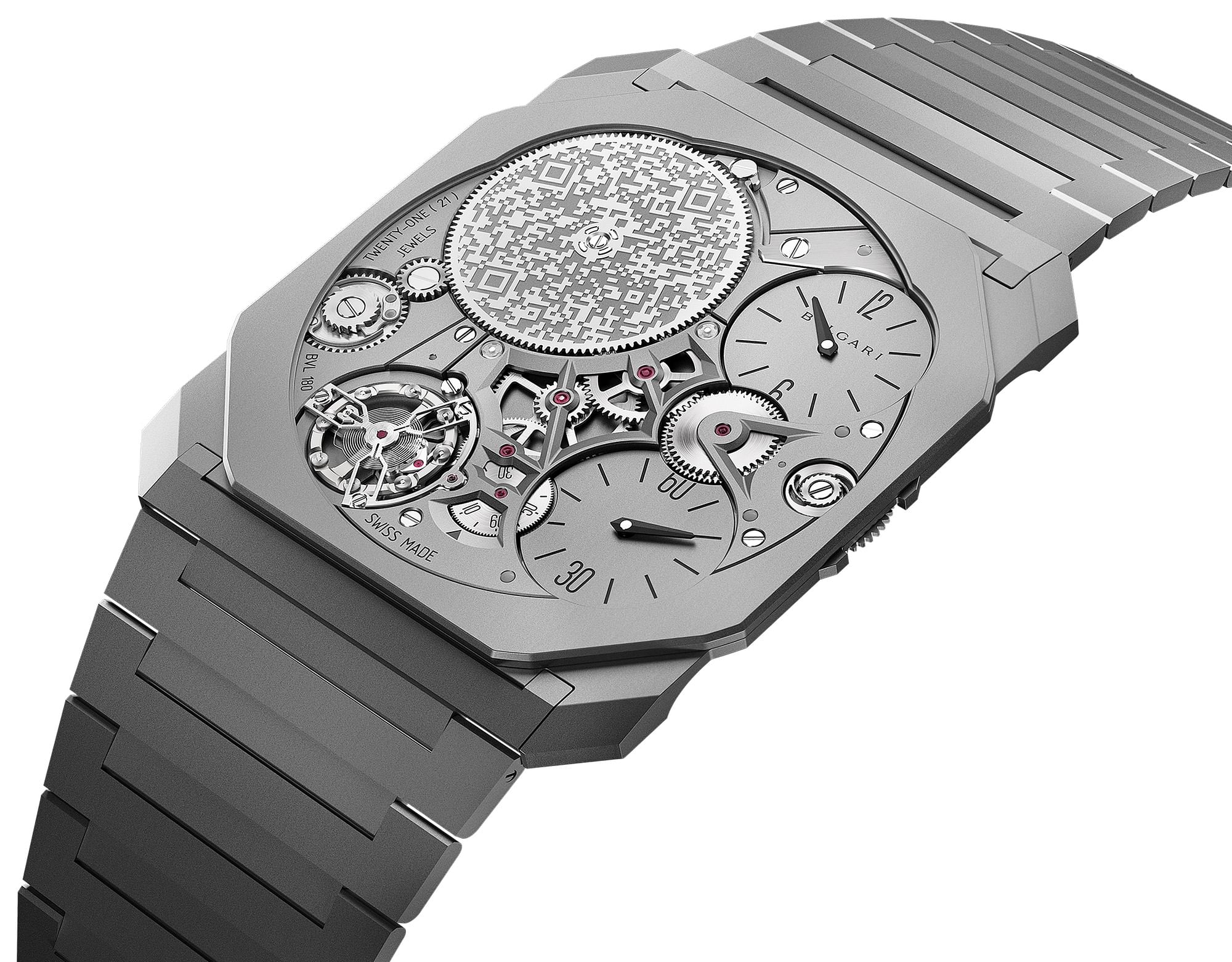 It was just a matter of time: Having smashed watch thinness records in seven times over seven years with various Octo Finissimo models — ranging from world’s thinnest automatic watch to thinnest tourbillon watches — it now nabs that most straightforward and possibly, most covetable title: Thinnest mechanical watch. Its eighth thinness record comes courtesy of the Octo Finissimo Ultra, which is just 1.8mm thick. That’s svelter than a 50-cent coin. This crown was hitherto held by Piaget’s 2mm Altiplano Ultimate Concept timepiece, which can also be customised and made to order.

This year marks the 10th anniversary of the Octo family, with the Octo L’Originale that was launched in 2012. Featuring an eight-sided architecture inspired by the geometric motifs that decorate the arches of the Pantheon in Rome, that model set the stage for the range’s distinguishing look with its round bezel and octagonal case.

In 2014, the ultra-thin Octo Finissimo range got its start with the Octo Finissimo Tourbillon Manual, featuring a monochromatic grey palette, a matte, sandblasted titanium case and an integrated bracelet. While Octo Finissimo watches have since been done in a variety of materials including steel and ceramic, that all-grey aesthetic remains a cornerstone of the Octo Finissimo family.

But back to the Octo Finissimo Ultra. To build this unprecedentedly skinny timepiece required the rethinking of many components and processes. “The challenge of this eighth record was the most difficult to overcome,” says Bulgari’s product creation executive director Fabrizio Buonamassa Stigliani, in a media release. This gives you an idea of the difficulties in achieving this level of ultra-miniaturisation, considering that the Octo Finissimo family includes complex models such as a perpetual calendar and a skeletonised tourbillon chronograph. Buonamassa Stigliani adds, “We had to break the rules not only in terms of movement design, but also of the case, caseback, bracelet and folding clasp.”

To eliminate as much height as possible from the ground up, the caseback also serves as the mainplate on which the 170 components of the manually wound BVL Calibre 180 as well as the subdials are integrated. Additionally, as much as possible of the movement is spread out within the 40mm-wide case, rather than stacked, which also explains why the Octo Finissimo Ultra has a regulator-style dial, with separate hours and minutes subdials, and a seconds display imprinted directly on a wheel in the gear train. There are eight patents pending for this timepiece.

One of the watch’s interesting features was adopted as an alternative to the traditional winding crown: two “knobs”, which resemble gears. Set horizontally on the caseback, part of these wheels stick out on each side of the case, with the one at 8 o’clock for winding, and the one at 3 o’clock (complete with tiny protectors) for setting the time.

As if creating the world’s thinnest mechanical timepiece wasn’t forward-thinking enough, Bulgari has included another unprecedented feature on the Octo Finissimo Ultra: The large ratchet wheel, which takes pride of place next to the hour subdial, is laser-engraved with a QR code. It’s a design element that one will find either absolutely cool or unnecessary, depending on personal taste.

Each of the 10 pieces of this limited edition will feature a unique QR code that leads the owner to an exclusive NFT artwork as well as a dedicated online space dedicated to the creation of the watch. Bulgari promises that “this entire digital ecosystem will be unveiled when the first Octo Finissimo Ultra hits the market in a few months’ time”.