WASHINGTON/TOKYO/KABUL — America’s mission in Afghanistan was never about nation-building, and its only national interest there was to prevent a terrorist attack on the homeland, U.S. President Joe Biden said Monday in televised remarks.

Under immense political pressure from both Republicans and fellow Democrats, the president cut short his stay at Camp David and returned to the White House. The remarks, which were not initially on his public schedule Monday morning, sought to defend his April decision to withdraw that has since resulted in a Taliban takeover.

While he admitted that the situation “did unfold more quickly than we had anticipated,” the president stressed that this was the right decision for the U.S. “American troops cannot and should not be fighting in a war and dying in a war that Afghan forces are not willing to fight for themselves,” he said.

Biden also said the nature of warfighting is changing. Noting that the terrorist threat today has expanded well beyond Afghanistan, he said the U.S. is running counterterrorism missions in multiple countries where there is no permanent American military presence.

“We’ve developed counterterrorism over-the-horizon capability that will allow us to keep our eyes firmly fixed on the direct threats to the United States in the region and act quickly and decisively if needed,” he said.

The fall of Kabul to the Taliban, coming after a nearly 20-year campaign to root out the Islamic militant group in Afghanistan, has underlined the inability of American military might alone to create lasting change.

The Taliban declared victory from the presidential palace in the Afghan capital on Sunday after seizing control of nearly the entire country in a flash with the withdrawal of the American troops that had kept them in check. The group is in talks with the government on a transfer of power.

“Today is a great day for the Afghan people,” the spokesman for the Taliban’s political office said.

After invading the country in 2001 in response to the Sept. 11 attacks and ousting the Taliban from power, Washington propped up a new Afghan government with military force and cash. The U.S. supported the country in introducing democratic institutions, including a constitution and direct presidential elections.

Yet its costly attempts at nation-building — despite Biden’s rejection of the concept — ultimately failed. 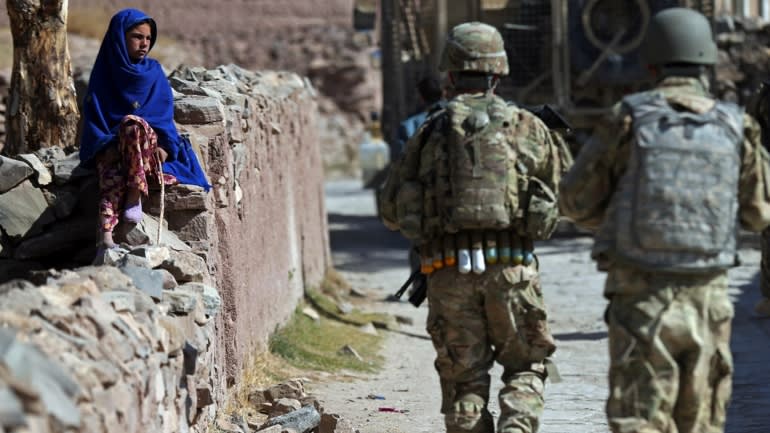 An Afghan girl watches U.S. troops in 2012: Washington’s focus on fighting terrorism came at the expense of its nation-building efforts.   © Reuters

Perhaps the biggest reason is that the Afghan people were left little better off economically as the U.S. was largely absorbed in the “war on terror.” Gross domestic product per capita peaked in 2012 at $641 and has since declined sharply to $508 in 2020, World Bank data shows.

Societies where the state is not powerful enough to guarantee the public’s safety and livelihoods — like Afghanistan and Iraq, where the U.S. launched a war in 2003 — are more prone to divisions and political patronage along tribal and religious lines.

The revival of the Taliban in Afghanistan and the rise of the Islamic State in Iraq were enabled by the disruption that followed the American invasions and the weakness of the authorities that arose from those conflicts.

Afghanistan, in particular, was riven by a power struggle between President Ashraf Ghani and political rival Abdullah Abdullah and was plagued by deep corruption. When Ghani fled the country amid the Taliban takeover, he brought along four cars and a helicopter full of money, according to a spokesman at the Russian Embassy in Kabul cited by Russian media.

Strong leadership, by contrast, has helped to propel the Taliban’s advances. The group has many fighters with experience from prior conflicts, including with the former Soviet Union, and armed itself and expanded its ranks with cash from opium poppy cultivation.

The U.S. could have made a less disastrous exit from Afghanistan.

The best chance was back in December 2001 and early 2002, according to two former State Department officials involved in Afghanistan policy. The Taliban — forced out of power and pushed back to Kandahar, then their last remaining stronghold — had offered to surrender under certain conditions, such as amnesty for top members.

But Defense Secretary Donald Rumsfeld and his neoconservative allies rejected the idea. They sought to root out terrorism and bring Taliban leaders to justice by force, then rebuild the country on a foundation of American-style democracy. And with roughly 90% of U.S. adults supporting the war on terrorism, such a tepid victory was seen as unacceptable.

Washington botched its handling of the conflict from there. Bush’s successor Barack Obama presided over a military surge in Afghanistan, but there was a shared sense, according to a senior State Department official at the time, that military victory was impossible. Airstrikes and the deaths of Afghan civilians in U.S. attacks stoked anti-American sentiment.

The Biden administration, which has made defending democracy a core principle of its foreign policy, has essentially stood by and allowed the democratically elected Ghani’s government to fall.

Going forward, the Taliban may establish a one-party state. Under their previous regime from 1996 to 2001, they imposed a harsh form of Islamic fundamentalism, forbidding women from working or studying.

“I don’t want to lose the rights” gained over the past 20 years, a woman working at a government agency in Kabul said. “I want to keep working outside the house.”

The victory of democracy and capitalism with the fall of the Berlin Wall and the end of the Cold War three decades ago emboldened the West, whose attempts to replicate this success in Afghanistan and Iraq later went off the rails.

In countries where democratic systems are weakening and power is concentrated in the hands of a single group, the authoritarian models of China and Russia offer an appealing alternative. These nations could be swayed by the promise of development support via Beijing’s Belt and Road initiative or resource and arms deals with Moscow.