UK-based Ken Freivokh returns with an exterior design for Azimut’s Magellano line, but the biggest surprise on the Collection’s new 25 Metri flagship is the remarkable interior by Italian Vincenzo de Cotiis. 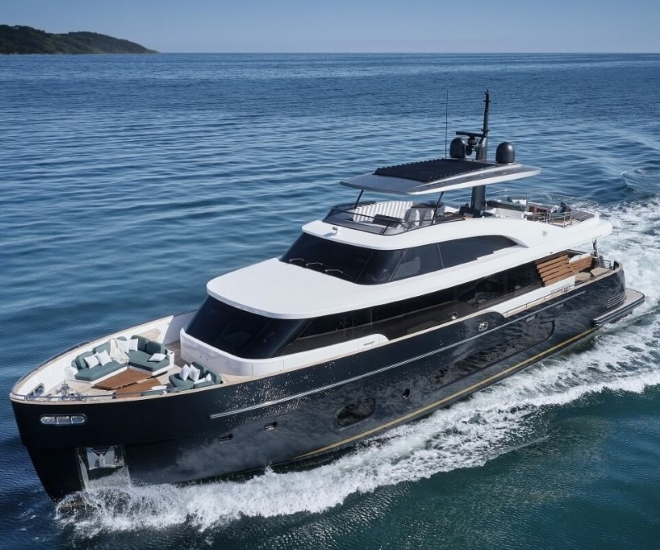 Ken Freivokh designed the Magellano 25 Metri, which joins the 43, 53 and 66 by Cor D Rover

Azimut may be one of the world’s leading builders of fast planing flybridge yachts, but that doesn’t mean it can’t build yachts with longer-range cruising in mind. With the fourth model in their semi-displacement Magellano series, Azimut’s navetta-style yachts are proving themselves to be unique. And the Magellano 25 Metri, with its timeless exterior design by Ken Freivokh and minimalist modern interiors by Vincenzo de Cotiis, could well be the yacht that takes longer-range cruising to a new level. 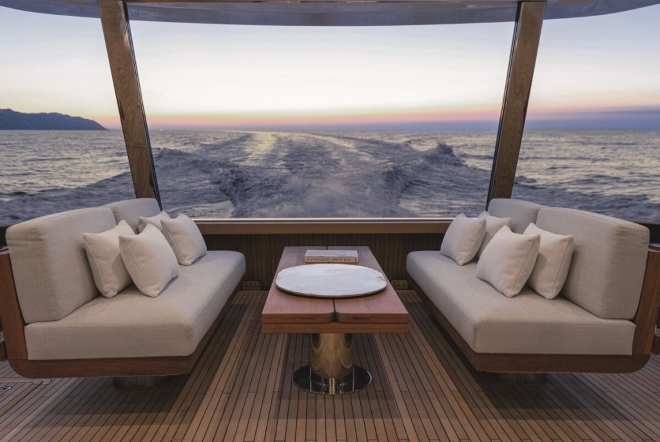 For the 25 Metri, Freivokh created a raised pilothouse design with the clean horizontal lines and straight bow of a contemporary trawler. Azimut applied its innovative carbon-tech construction techniques to make the most of the large interior volumes that Freivokh designed by using weight-saving carbon-fibre extensively in the superstructure.

The aft cockpit sets the tone for a yacht where views to the water are given top priority. With twin couches placed perpendicularly to the glass bulwark that encloses the aft section, the cockpit is spacious and comfortable, and the view is unobstructed by structures and furniture. 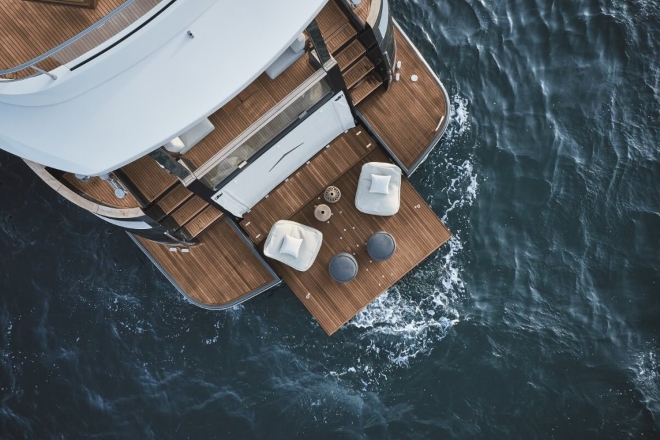 The transom can become a large swim platform

While at anchor, the transom can open horizontally to become a large bathing platform or slant down to the water for launching the tender or toys from the garage. Either way, you are never shut off from the natural environment around the yacht and the sensation is of infinite space.

The foredeck is exceptionally well appointed and has furnishings that can adapt to different uses throughout the day. Depending on the height the tables are set at, the seating can be used as banquettes or as sunpads, making this a versatile open-air area that will be a key part of on-board life. 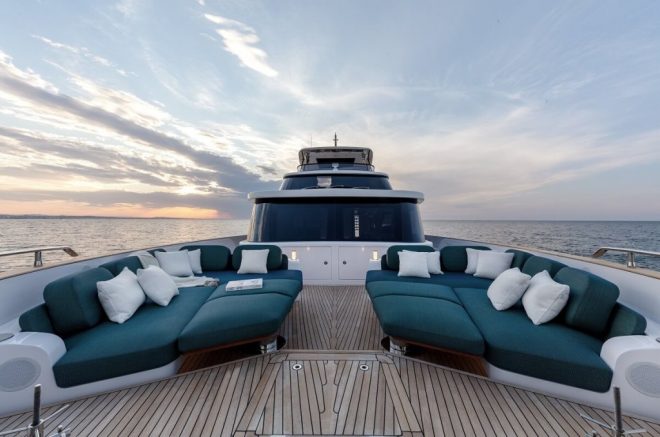 The flybridge, accessible both from the pilothouse and from the aft cockpit, has an outdoor helm station and is also an excellent space for lounging and entertaining, with a dining table shaded by the hardtop and sunpads and a bar aft.

Freivokh’s raised pilothouse layout provided De Cotiis with an open, uninterrupted area on the main deck that has views straight through from fore to aft. 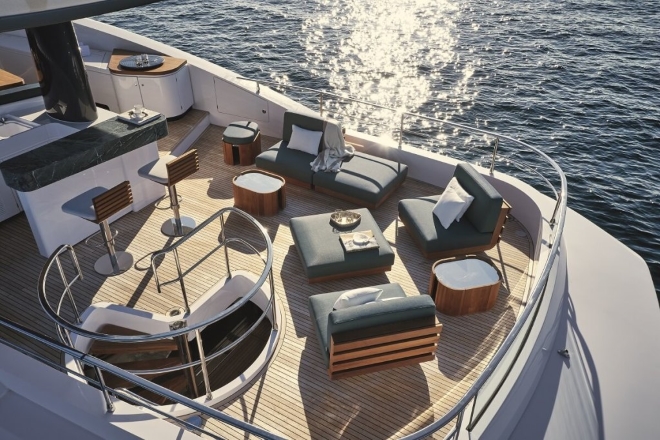 The flybridge has a clean aft area for loose furniture

Known for work that pushes the boundaries between architecture, design and art, De Cotiis approached all aspects of the 25 Metri from new angles, sculpting the spaces and furnishing them with organically shaped pieces in a colour palette that recalls the environment around the yacht.

With this interior, De Cotiis shows that yachts don’t have to be symmetrical to be balanced and that an element of surprise only adds to the beauty of on-board living. Much as his treatment of surfaces and furnishings aboard the 25 Metri is unexpected, it never jars thanks to a tranquil and unified colour palette of sea green, cream and brushed brass used throughout the yacht. 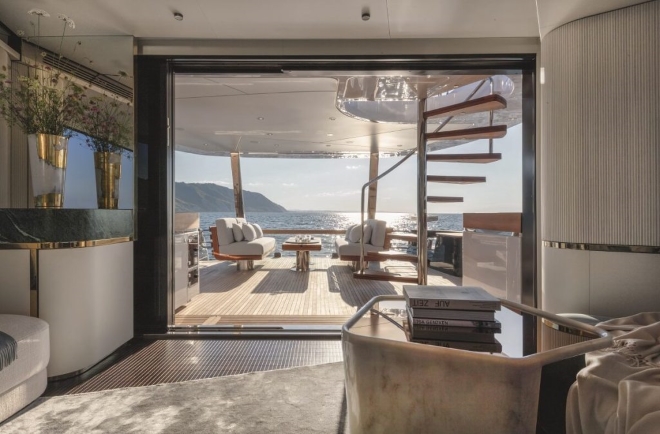 Entering the saloon, the immediate sensation is of air and light. De Cotiis masked the yacht’s structural elements with mirror or clad them in curved and reflective materials so that they seem to disintegrate into the diffused light.

He also made sure that no element of the yacht’s decor was predictably square or rectangular by custom designing all the furniture in irregular shapes that flow instead of encumbering as so often happens when loose ‘design’ pieces are used. 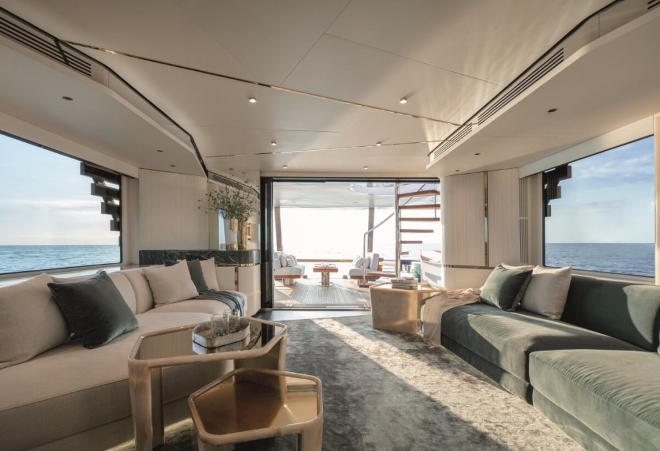 He loves an imperfect, patinated effect, so even painted wood surfaces are left with a hint of the underlying material showing through for depth and a sense of history.

The dining table shows just how De Cotiis considered living aboard: its top can be rotated away from the centreline of the yacht so eight people can be seated at once, then shifted back to its usual position to reduce the space being used.

Separated from the saloon by a mirrored door, the bright, airy and elegant crew mess could easily be used as a continuation of the saloon, offering a casual spot with excellent views to the foredeck and beyond. 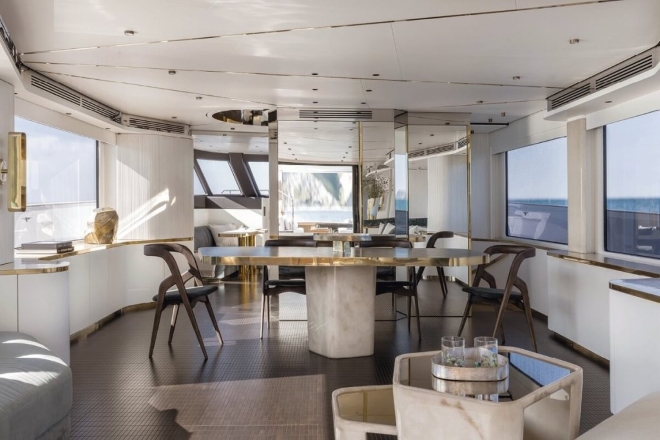 Federico Lantero, Product Marketing and Communication Director of the Azimut-Benetti Group, explains why Azimut wanted to work with De Cotiis.

“When you’re on a yacht, you don’t want to feel ‘at home’. You want something more magical. We felt that Vincenzo De Cotiis would know how to create atmosphere and give the yacht personality,” he says. 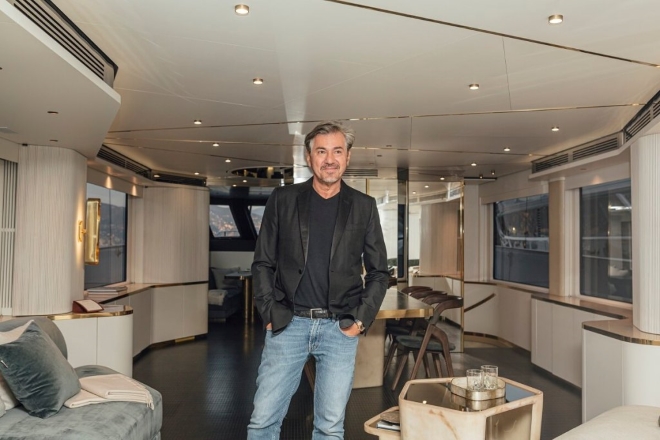 De Cotiis was working on yacht design for the first time

“In Fano, where we have a shipyard, he became fascinated by fibreglass. He started picking up old, damaged pieces and working with them to bring out imperfections and new tonalities. Many of the surfaces in the saloon, like the bases of the tables and some wall panels, are the result of months of work with fibreglass to achieve the effects that De Cotiis wanted.

“It was a kind of philosophical research for him. The yacht is made of fibreglass, but often the material is covered up. He wanted to give the base material new nobility, to bring it out.” 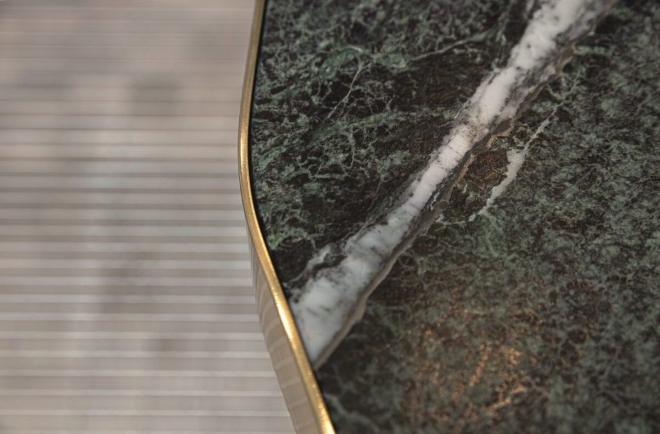 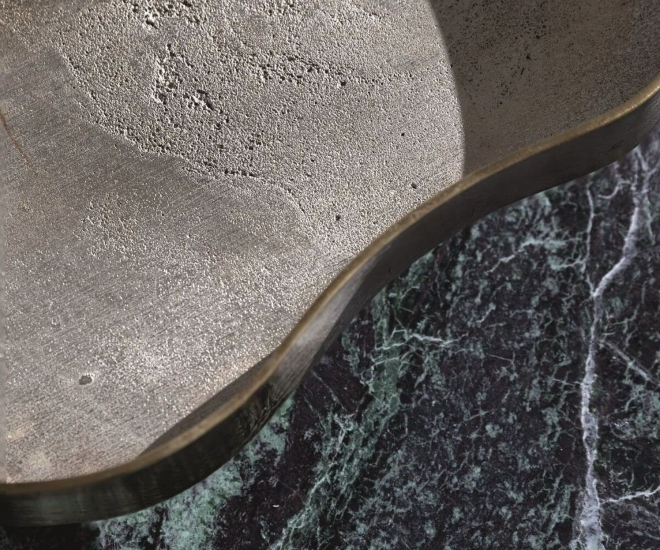 To create the effects De Cotiis wanted, different layers of fibreglass resin were dusted with metallic particles then sanded down. The Italian’s manual, handcrafted craft approach to fibreglass creates surfaces that are difficult to classify and lovely to look at while remaining durable, versatile and uniquely adapted for marine use.

It’s almost ironic that Azimut used carbon-fibre to build the superstructure and hardtop, concealing a material often used decoratively, while De Cotiis explored the decorative potential of fibreglass, a material that is usually considered so humble and bland that it is hidden.

De Cotiis works his magic again in the master cabin. Like all the guest accommodation, this full-beam cabin is on the lower deck, aft and built in a floating capsule to reduce potential vibration from the engine room. 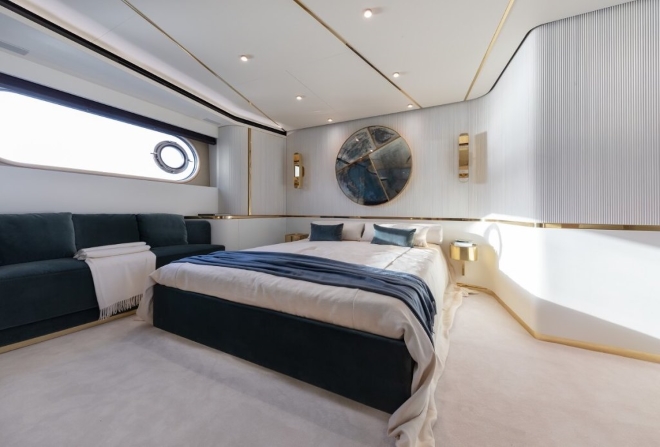 The large hull windows almost graze the waterline, bringing the sensation of being in nature to the forefront. The bed seems to float on a cloud of white carpeting and closet doors are practically hidden they’re so well integrated. The bathroom layout is unusual but functional, with twin basins to port and separate cubicles for the shower and WC.

Even the ceiling treatment – where irregularly shaped polygonal panels are set off with rays of brushed brass – is unexpected, interesting and elegant. The lighting has been designed for warm, diffused effects. 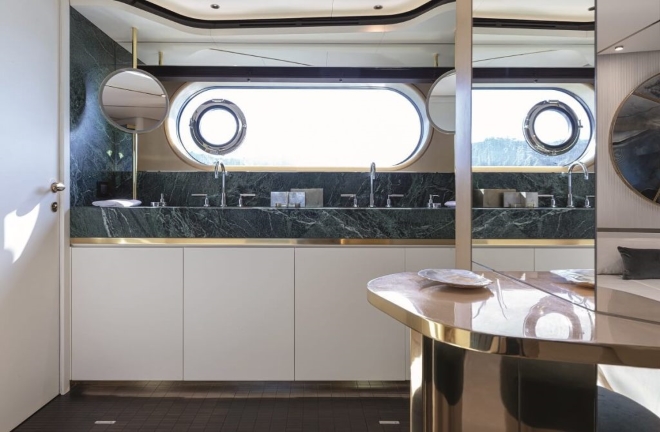 Other guest cabins include two doubles to port and a starboard twin cabin with beds that can slide together to become a double.

All cabins have ensuite bathrooms and are furnished in the same colours and luxury materials used throughout the yacht. 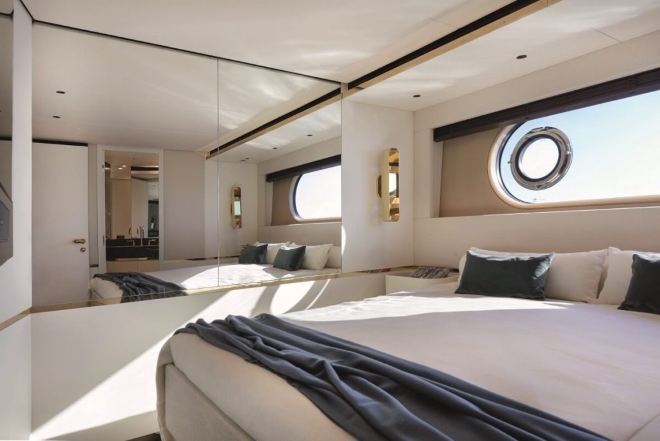 Of course, owning a yacht is not all about fun and games. It takes some serious technology to assure comfort and efficiency aboard. Pierluigi Ausonio’s Studio P.L.A.N.A. provided the naval architecture for the 25 Metri’s dual-mode hull, whose double chines and skeg let it navigate smoothly even in rougher conditions.

At cruising speed, the hull runs on its broad upper chine then transitions at 16-16.5 knots to skim along, deflecting the water off its lower chine. Twin 1400hp MAN engines provide a top speed of up to 24 knots while the cruising range at 12 knots is 750nm. 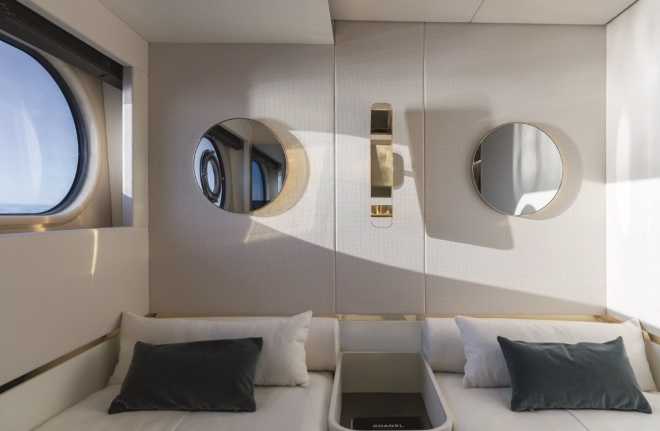 The lower deck includes a flexible twin cabin (above) to starboard, as well as crew cabins forward

As part of its Green Efficiency Program, Azimut has been collaborating with Studio P.L.A.N.A. for new hull shapes and the 25 Metri bears witness to the results they are achieving. A timely touch in these days of the Covid-19 pandemic is the fact that this is the first yacht that can be fitted with Azimut-Benetti’s BCool sanitising system for renewing, refreshing and recirculating the air inside the yacht.

Lithium batteries can also be added so that the yacht’s hotel functions such as kitchen equipment, AC units and the Humphree fin stabilisers can be used for four-six hours by day or six-eight hours by night, even when the generators are off. 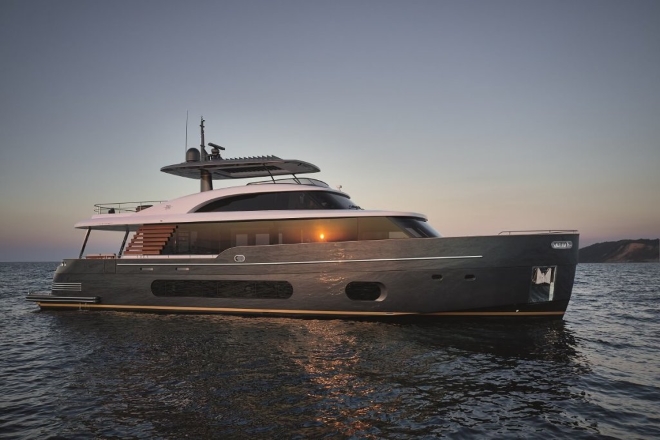 In the Magellano 25 Metri, Azimut has created a yacht whose truly sophisticated interiors are backed by the kind of technology that will make it both efficient and pleasurable to use. The 25 Metri that isn’t a just place to display art and enjoy the latest technology – the yacht itself is a technological work of art.

And there’s more to come, with Freivokh and De Cotiis reuniting for the 30 Metri, to be launched in 2022.