TOKYO — Japanese athletes’ success at their home Olympics marks a wider tilt of the Games toward Asia as the region plays host more often and notches record medal hauls.

Japan’s stint as host nation in the summer Olympiad that concluded on Sunday came after Pyeongchang in South Korea held the winter Games in 2018. Beijing is due to hold the Winter Olympics next year.

Asia has come a long way since 1964, when Japan became the first host in the region. Asian athletes picked up the region’s highest ever medal haul at Tokyo 2020, and the size of the sporting market has grown along with rise in economic heft. While the next three summer Games will be held in the more traditional Western locations of France, the U.S. and Australia, developing Southeast Asia is hoping to play host through Indonesia’s bids for the 2036 event.

The 2008 Beijing Games was a pivotal juncture for both China’s status in the world, and also how the International Olympic Committee views the Asian market. “The Beijing 2008 Games were amazing for Olympism and television and for creating new interest in the Olympic movement,” said Rob Prazmark, who helped create the IOC’s corporate sponsorship program. A Japanese family watches the gold medal match of the table tennis mixed doubles at their home on July 26. (Photo by Ken Kobayashi)

This year, the Asia Pacific region gave the Tokyo Games its highest ratings, while viewership declined in the West. “We can say Asia is showing strong audience figures in early indicators overall,” an IOC representative told Nikkei Asia.

Nine in 10 Japanese watched some part of the Olympics, according to the IOC, and viewership of the opening ceremony in India was six times that for Rio 2016. The men’s 100-meter track final and both table tennis singles finals were the most watched sports broadcasts in China since the soccer World Cup in 2018.

General audiences tune in to sports events when their athletes are doing well, and Asian athletes brought home 204 medals. Japan, Taiwan, India, Hong Kong and the Philippines all broke their previous medal records.

The medal rush is partly due to geographical advantage, said Tadao Isaka, sports science professor at Ritsumeikan University. Athletes are likely to perform better in their home region, as they require less adjustment to time difference and climate.

While home advantage plays some role, public spending on sports has grown in Asia. Except for Brunei, the only other Asian countries that have not won a single Olympic medal are Bangladesh, Cambodia, Laos and Myanmar — all low-income nations. Even when it was still a developing country in 1984, China sent more than 200 athletes to Los Angeles, where they won 32 medals. Since excellence in international sports brought prestige, China made early investments in a state-funded national sports program based on the Soviet model.

Unlike U.S. athletes who come up through club or collegiate sports, Chinese children with elite potential live, study and train in specialized sports facilities like the Li Xiaoshuang Gymnastics School in Hubei province.

While the academies have been criticized for harsh treatment of children, a product of the Li Xiaoshung school, Guan Chenchen, 16, won gold on the balance beam in Tokyo, beating her hero Simone Biles. 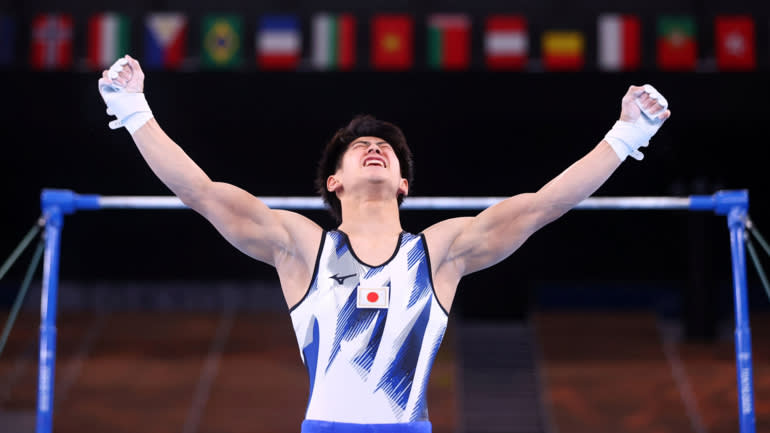 Daiki Hashimoto of Japan reacts after performing on the horizontal bar on July 28.   © Reuters

For Southeast Asian countries with tighter resources than East Asia, the strategy at these Games has been to focus on specialty events. Three of the Philippines’ four medals this year came from boxing, one of the country’s most popular sports.

Indonesia’s success in badminton, which has delivered all of the country’s past eight gold medals, has drawn major sponsors like state-owned lender Bank Negara Indonesia to supplement low government support. The Indonesian Olympic Committee received only 32 billion rupiah ($2.23 million) from the government to send 28 athletes to Tokyo, including 10 badminton players.

Some athletes managed to place high in sports that are not considered their country’s specialty, like the Philippines’ Carlos Yulo, who finished fourth in men’s gymnastics vault. Yulo received a scholarship from the Olympic solidarity fund, which pays for training as well as admission and travel fees for international competitions and elite training camps.

For the Tokyo Games, sports programs in Asia received more than $8 million in Olympic solidarity funding disbursed by the IOC. More than 400 Asian athletes like Yulo received scholarships.

“The various Asian confederations might have sought that additional funding thinking ‘Japan is in our area, so let’s try to get more athletes to qualify’,” said Heather Dichter, sports historian at De Montfort University in Leicester, England. Su Bingtian of China celebrates after winning a men’s 100-meter semifinal heat at Olympic Stadium in Tokyo on Aug. 1. He was the first Chinese athlete to go through to the final of the blue-ribbon event.   © Reuters

A portion of the solidarity funding goes to help national Olympic committees improve their administrations. Despite such grants from the IOC, most Asian bodies have yet to find a sustainable way to finance national sports.

“Do we fund elite sports so we can get medals, or do we fund grassroots sports so we have more athletes?” Dichter said of the trade-off facing national Olympic committees who depend on meager government budgets.

Still, when a country’s athletes succeed at the Olympics, politicians typically co-opt their victories to stir nationalist sentiment. The clanging of medals will be music to the ears of Japanese Prime Minister Yoshihide Suga, whose approval rating is falling ahead of a general election this autumn.

After once accusing weightlifter Hidilyn Diaz of taking part in a coup plot, Philippine President Rodrigo Duterte attempted to mend fences after Diaz won the country’s first ever Olympic gold medal. In the two weeks since she won, Diaz has fielded requests to endorse a party or a candidate for the May 2022 presidential election. 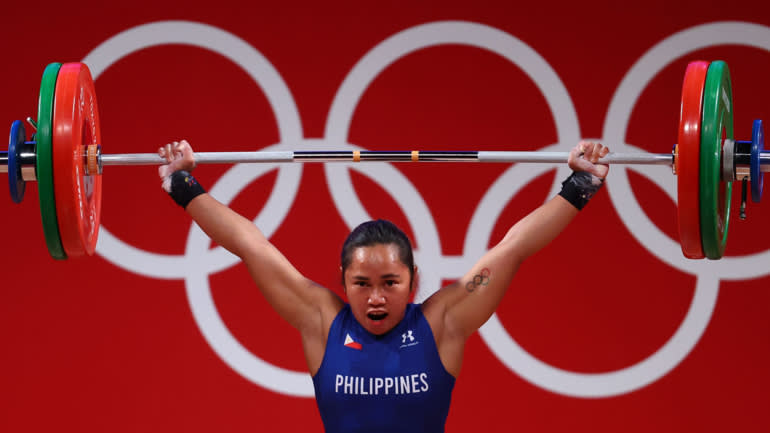 Hidilyn Diaz of the Philippines won gold in the women’s weightlifting 55kg category on July 26.   © Reuters

As Asian representation grows in the halls of Olympic power, it may become difficult for the nominally apolitical IOC to stay out of the region’s geopolitics. And a lot of it has to do with the next Olympics host: China.

Taiwanese duo Wang Chi-lin and Lee Yang scored a coup in Tokyo, when they defeated a Chinese pair in the final of the men’s doubles badminton. Wang and Lee dedicated their medals to Taiwan rather than “Chinese Taipei” as the team has been known for the past four decades.

After it became a sovereign state, “China very much stayed out of several federations because Taiwan was a member,” said Dichter. “China’s increasing power as a member caused Taiwan to be called what it is now.”

A record haul of 12 medals for “Chinese Taipei” amplified calls for the self-governing island to be treated as a sovereign state. On social media, Taiwanese decried the “indignity” of treatment on par with Russia, whose flag and anthem were banned at the Olympics for state-sponsored doping. Lee Yang and Wang Chi-lin of Taiwan react after winning the gold-medal match against Li Junhui and Liu Yuchen of China on July 31.   © Reuters

Before the Games opened, the IOC ordered South Korea’s delegation to remove banners recalling Japanese wartime aggression from their quarters in the Olympic Village. And even before the Tokyo games closed, IOC President Thomas Bach deflected press questions about China’s alleged human rights abuses of Uighurs in Xinjiang.

China’s official Xinhua News Agency reported on Saturday President Xi Jinping saying: “Once a country that had few chances to participate in the Olympic Games, China today is home to athletes who excel at many sports. This markedly manifests China’s development and growth of national strength.”

Back in 2015, when they awarded the 2022 Winter Games to Beijing, “The IOC didn’t know what they were getting into,” said Michael Holtzman, a marketing strategist who helped secure Beijing 2008’s bid.

As the region’s security and territorial disputes grow tense, the danger increases that the U.S. will once again boycott the Olympics as they did the 1980 Moscow Games. Worse for broadcasters, U.S. viewers may decide not to watch an Olympics held in China.

“Fragmentation is the enemy of Olympism as a movement and as a business model,” said Holtzman, referring to viewers’ growing tendency to tune in only for their favored country, sport or athlete.

He added: “That might become more severe in Beijing depending on how triumphalist or accommodating China will be.”