As Myanmar school year nears, teachers and students say no to junta

YANGON/BANGKOK — Hundreds of thousands of basic education through university students in Myanmar are set to boycott classes as the academic year begins on June 1, an attempt to let their actions speak louder than their slogan, “No need military slave education.”

The boycott, an extension of a battle that is already taking place in Myanmar, is the latest show of opposition to the military coup that was staged almost three months ago.

The nation’s schools and universities have been closed for more than a year due to the pandemic, but the junta is determined to open them on June 1.

As such, the junta’s State Administration Council is urging teachers and professors to cooperate and to ensure that students regularly attend classes.

Schools are already something of a staging ground as troops have maintained a presence on campuses across the country as part of the military’s efforts to crack down on anticoup protesters.

According to a Myanmar Teachers’ Federation source, nearly 150,000 teachers from universities and schools have been suspended for refusing to work under military rule. The number of suspended teachers is nearly equal to one-third of Myanmar’s 430,000 teachers.

Classes for students studying for master’s degrees and those in their final year of bachelor’s studies reopened on May 5, but few professors and students have shown up amid the boycott. Students carry a banner and flash the three-finger salute as they take part in a protest in Mandalay, Myanmar, on May 10.   © Reuters

“All M.A. students and final-year students of our major did not go to the university,” a 22-year-old master’s student in Yangon told Nikkei Asia, “and 100% of our students boycotted when our university resumed [classes] in May.

Right after the military seized power — and until forces cracked down — the student took part in several pro-democracy strikes in downtown Yangon.

The student says he is contenting himself by studying English over the internet. “I will not attend classes administered by the junta” he said. “I am determined to quit my university if our elected government cannot resume.”

The student also said he is preparing to apply for the Lincoln Scholarship Program, a study-abroad program offered by the U.S. Agency for International Development.

Teachers and professors, nurses and doctors, and other civil servants have been active civil disobedience participants since the coup. Participating teachers understand that millions of students are thus at risk of being negatively impacted.

“I will continue participating in the civil disobedience movement until we achieve this revolution,” said a 32-year-old high school teacher in the eastern state of Shan. “It is absolutely impossible for me to return to work.” 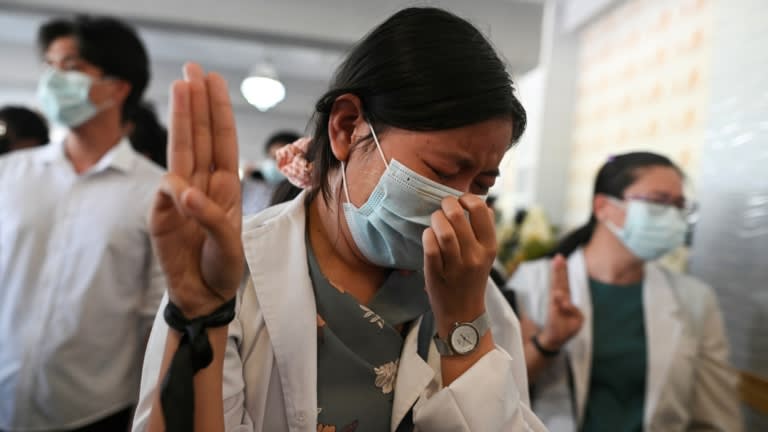 A woman shows the three-finger salute as she attends the funeral of Khant Nyar Hein, 17, a medical student who was shot and killed during a crackdown in Yangon on March 16.   © Reuters

The teacher led an anti-coup movement of education workers in Taunggyi, the state’s largest city, assembling teachers and others for red ribbon campaigns and marches. But he is on the run now, having moved his location four times due to security concerns sparked by incitement charges against some of his colleagues.

He remains steadfast in his beliefs.

“I do not want to pass on the military’s slave education to the young generation,” the teacher said. “I only want to teach [my students] about justice and equality, and the true history of the country. So, I will never surrender to the military dictator and will fight until we win.”

The junta says its curricula hasn’t changed since the coup and is in line with the 30-year national education plan approved by a previous government in 2001.

“Disturbing the opening of schools is an act akin to destroying the country and is very bad,” junta leader Senior Gen. Min Aung Hlaing said earlier this month at a meeting of the State Administration Council. “Effective action must be taken against these destructive acts.”

Every day, military-owned Myawaddy TV announces lists of educators who have been subjected to legal action for “inciting state service personnel and education staff to participate” in pro-democracy actions. Hundreds of rectors, lecturers and teachers have been charged under penal code 505-A and could be imprisoned for a maximum of three years if found guilty.

Last July, the elected government reopened high schools, with plans to reopen middle and primary schools at a later date. But a second COVID wave began roiling the country in August, and all schools were instructed to close.

An entire academic year was wiped out.

The National Unity Government formed by Myanmar’s ousted lawmakers, ethnic minorities and protest leaders is working on its own plans. The parallel government’s education ministry on Saturday said its plans include online, offline and on-the-ground classes as well as affiliate programs offered in tandem with international universities. The NUG has formed an interim administrative council made up of representatives from 54 Myanmar universities. 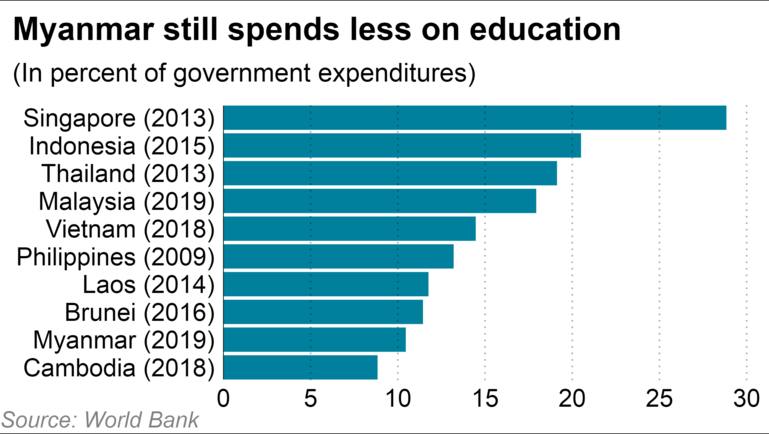 Before the coup, Myanmar had been increasing budgetary allocations for education. Under the democratic government of ousted leader Aung San Suu Kyi, the Ministry of Education in the fiscal year through September 2020 was provided with $1.85 billion, equal to 8.4% of the central government’s budget. The amount represented an 8.3 % increase from the previous year. It was also 3.7% more than what the military-backed government of Thein Sein provided about eight years earlier.

Save the Children, UNESCO and UNICEF on Thursday waded into Myanmar’s education crisis by issuing a joint statement that says any military attack on educators, places of learning or other educational facilities is unacceptable. “Keeping places of learning safe at all times, and ensuring continuity of learning, must be a priority for Myanmar,” the statement says. “The lack of access to a safe, quality education threatens to create an entire generation in Myanmar which will miss out on the opportunity to learn.”

Guy Taylor, the head of advocacy and policy at UNICEF in Myanmar, says the loss of learning could be catastrophic to the country’s overall development.

“Beyond the impacts on their learning, the impacts on children’s social development and psychological well-being can be profound,” Taylor said. “Even when places of learning reopen, there is a risk that some children may not return.