Katsuji Nakazawa is a Tokyo-based senior staff writer and editorial writer at Nikkei. He spent seven years in China as a correspondent and later as China bureau chief. He is the 2014 recipient of the Vaughn-Ueda International Journalist prize for international reporting.

But what exactly is that ideology? Few Chinese parents are likely to be able to answer this question on the spot. After suddenly appearing on the political stage at the Chinese Communist Party’s last national congress, in 2017, the outlines of the “thought” are being sculpted on the go.

But only Mao and Xi have had their names attached to “thought,” which is considered higher than “theory.”

Unlike Mao, Xi has not written many books or analysis papers. His ideology is a compilation of his remarks that generally point to all current policies and guiding principles.

For example, the new textbooks for the school year starting this month are filled with Xi’s comments on issues such as the core values of socialism. 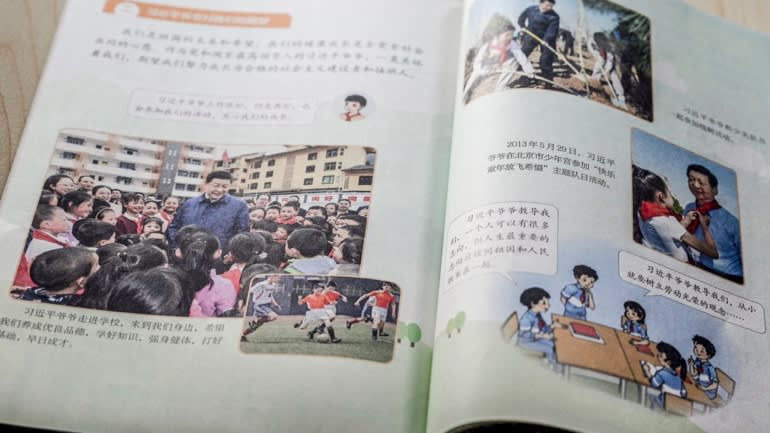 “Grandpa Xi” wants to teach young students to love the party, the state and socialism.   © AFP/Jiji

One remark is on the internet: “If the society lacks common ideals, common goals or common values, it will be just a raucous one and nothing can be achieved,” it says. Students will ponder what exactly that means.

“Xi Yeye” (Grandpa Xi) also appears in the teaching material for children in the lower grades of primary school. These pupils have only known the Xi Jinping era, and having the thoughts come from the familiar “Xi Yeye” is an attempt to make them more approachable.

From a young age, the children will be taught to love the party, the state and socialism, so that when they are older and ready for society, they will be of good “political quality.”

Studying Xi’s ideology is already common at workplaces across China. Now it will be in primary school classrooms.

Naturally, this is not purely about education.

One aim of blending Xi Thought into the national curriculum is to start something new ahead of 2022, when the seven-member Politburo Standing Committee, the party’s top decision-making body, will be reshuffled at the party’s next national congress.

Would it make sense for Xi to retire only a year after incorporating Xi Thought into China’s textbooks? That is the question the leadership wants people asking themselves. It will be a political success for Xi if he can make rank-and-file party members and ordinary people feel that his era should continue for a while.

It fits into a recent pattern of moves aimed at laying the groundwork for the party’s national congress.

Teaching Xi’s eponymous ideology at school smacks of a personality cult, which are strictly banned under the party’s constitution.

How the party’s Publicity Department tackled this issue is noteworthy. Reading between the lines, one could detect fierce power struggles going on behind the scenes. On Aug. 26, the department released a document titled “The CPC: Its Mission and Contributions,” referring to the Communist Party of China. 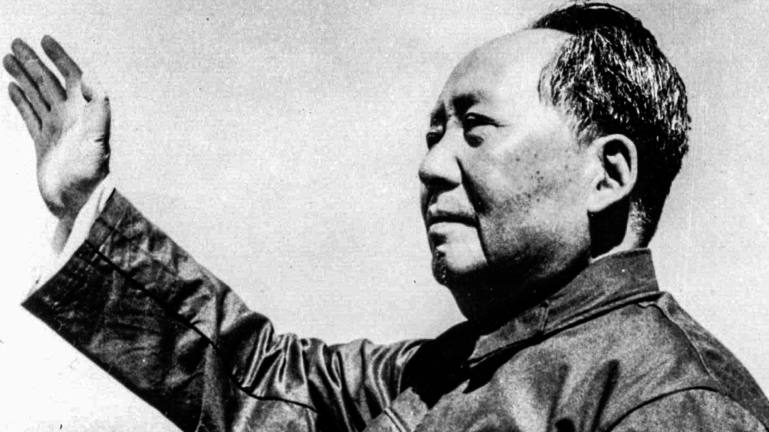 A footnote says the Cultural Revolution “refers to the tumultuous political movement from May 1966 to October 1976 initiated by Mao Zedong and manipulated by two counterrevolutionary cliques under Lin Biao and Jiang Qing.”   © AP

“Upholding the leadership core of the CPC in no way involves the creation of any kind of personality cult,” it says explicitly. “The Party leadership core never wields unlimited power or engages in decision-making at will; instead, it takes on heavy responsibilities in steering the Party and the country.”

This latter sentence is the more interesting. The term “steer” was used in the past to praise the party-leading efforts of Mao, Communist China’s founding father. The document treats Xi and Mao almost equally. The first part of the sentence, meanwhile, seeks to refute the notion that Xi is violating any party ban.

The document also vows to observe the long-standing collective leadership system. But this pledge is less convincing, considering a previous paragraph says, “Each member of the Political Bureau has submitted a written work report to the Central Committee and General Secretary Xi Jinping every year” — hardly the “collective leadership” envisioned by previous leaders.

“This has been one of the institutional arrangements for strengthening and upholding the Central Committee’s centralized leadership,” it says.

Another noteworthy point is largely hidden. A footnote at the end of the long document gives an evaluation of the Cultural Revolution, a topic Xi has avoided.

The Cultural Revolution “refers to the tumultuous political movement from May 1966 to October 1976 initiated by Mao Zedong and manipulated by two counterrevolutionary cliques under Lin Biao and Jiang Qing. It caused great harm to the Party, the nation, and the people,” the footnote says.

Mao’s mistake in launching the disastrous Cultural Revolution has not been highlighted since the Xi Jinping era began. 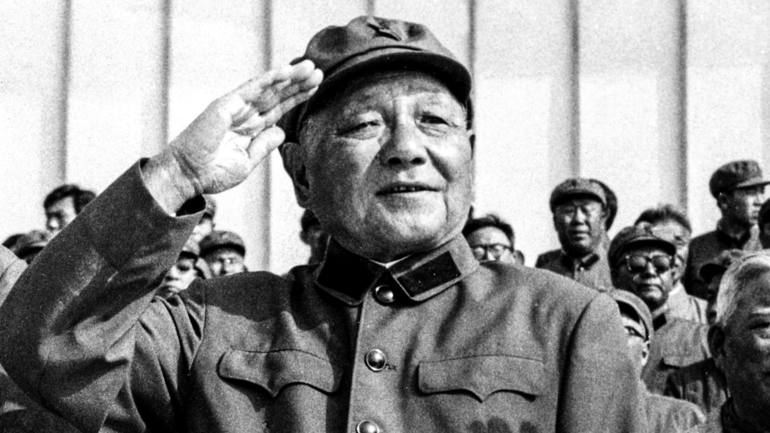 Xi is reluctant to forcefully criticize the Mao years.   © AFP/Jiji

In effect, Xi was saying that the years after Deng Xiaoping — under which China’s economy grew exponentially — does not deny the 30-year historical period before it, meaning the Mao era. The tongue-biting explanation reflects Xi’s reluctance to forcefully criticize the Mao years.

The footnote, however, unequivocally rejects the Cultural Revolution, largely adhering to the “resolution on certain questions in the history of our party,” which was adopted by the party in 1981 at Deng’s initiative to summarize the debacle.

The footnote puts in writing the rejection of the Cultural Revolution while allowing Xi to avoid saying the exact words.

What can be guessed from this? It is possible that Xi was under pressure to cope with smoldering discontent within the party over what smacks of a personality cult and Xi not repudiating the Cultural Revolution. 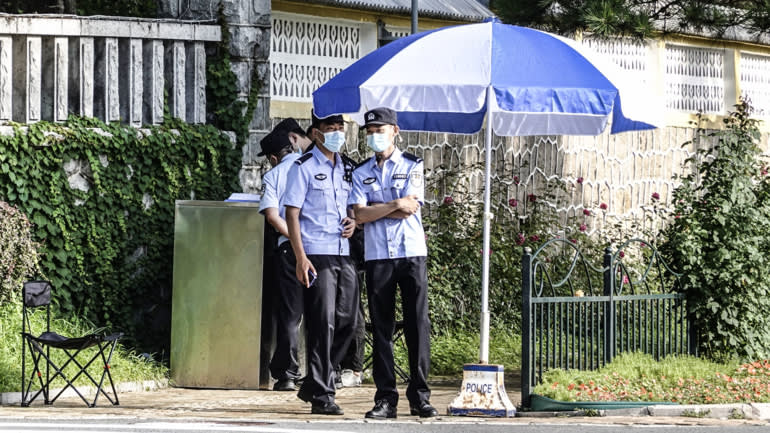 Discussions at this summer’s “Beidaihe meeting” forced Xi to consider some simmering discontent with what appears to be a personality cult he is building.   © Kyodo

One source who has observed Chinese politics for many years pointed out that Xi gave a certain degree of consideration to such discontent after summarizing the opinions expressed at this summer’s “Beidaihe meeting.”

China’s incumbent leaders and retired party elders get together in the first half of August every year in the seaside resort of Beidaihe, Hebei Province, to informally discuss important issues behind closed doors.

So two things are happening. As shown by the incorporation of Xi’s ideology into school teaching, Xi’s people are steadily paving the way to extend Xi’s reign beyond next year. At the same time, such an extension is not a done deal.

A political tug-of-war continues behind the scenes. With a little more than one year left before the twice-a-decade party event, Xi has yet to face a moment of truth.

Thailand: Oil spill heading for east coast beaches; if hits ‘will take years to clean up’