ISLAMABAD — Al-Qaida militants and allied transnational groups are aiding the Taliban’s rapid advance in Afghanistan, ratcheting up the pressure on the Kabul government.

Under a U.S.-Taliban deal reached in February last year in Doha, all international coalition forces were to leave Afghanistan by this May in exchange for security guarantees from the Taliban, including cutting ties with al-Qaida and its allies, and pledging not to harbor foreign terrorists.

But even as the U.S. and allied forces have almost completely withdrawn, the Taliban have made rapid territorial gains, capturing swathes of the countryside, towns and border crossings, mainly with the support of al-Qaida and allied groups, including the East Turkestan Islamic Movement (ETIM), a Uyghur Muslim rebel group; Tehreek-e-Taliban Pakistan (TTP); and Central Asian militant outfits such as the Islamic Movement of Uzbekistan (IMU) and Jamaat Ansarullah, militants outfit also known as the Tajik Taliban.

The Taliban insists the reports are untrue. “We do not have foreign fighters in our ranks,” Suhail Shaheen, a Taliban representative, told Nikkei Asia. “Such reports or claims are aimed at misleading the people of the world about on-the-ground realities in Afghanistan.”

Since mid-April, the Taliban have launched more than 5,500 attacks in 31 of Afghanistan’s 34 provinces “with the direct support of more than 10,000 foreign fighters representing 20 groups, including al-Qaida, ETIM, and TTP, and IMU,” Afghan Ambassador Ghulam Isaczai said at a Friday briefing at the U.N. Security Council.

“The link between the Taliban and the transnational terrorist groups is stronger today than at any point in recent times,” Isaczai said.

Afghanistan’s Ministry of Defense on Saturday claimed that 30 al-Qaida fighters were among the 112 militants killed in airstrikes launched by Afghan forces to protect Lashkar Gah, the capital of Helmand Province, from the Taliban. 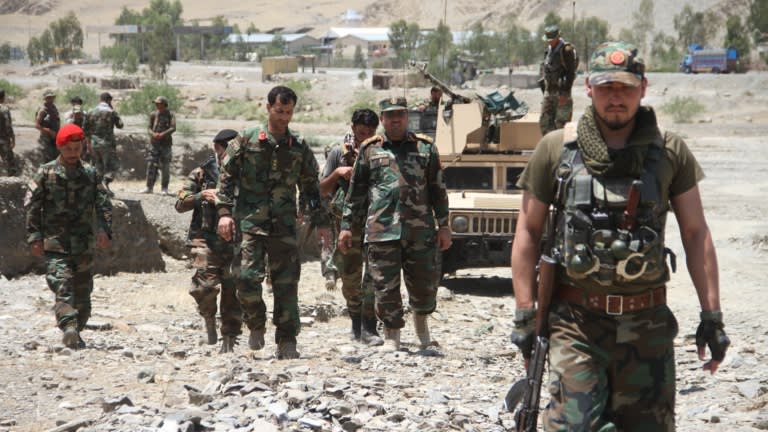 Afghan security forces deploy for operations against the Taliban in Nangarhar Province, Afghanistan, on July 23, in response to a Taliban attack on the Spin Boldak border crossing in Kandahar.   © Getty Images

“On a daily basis, Afghan security forces kill al-Qaida-linked militants, who are fighting alongside Taliban militants,” said an official at the ministry who requested anonymity for security reasons.

Security experts say the Taliban has deep ties to al-Qaida, particularly al-Qaida in the Indian Subcontinent (AQIS), the outfit’s regional chapter, and offers them protection.

“Decadeslong joint struggle, shared global jihadi ideology, a Pashtun tradition of honoring and protecting ‘guests,’ and even intermarriage are key factors behind the strong relationship between the Taliban and al-Qaida and its allied groups,” said Basir Hotak, a Kabul-based security analyst. However, the two sides managed to keep these relations secret even as peace talks between the U.S. and the Taliban became serious.

“Al-Qaida has very carefully controlled its media and propaganda strategies not to show any of its presence in Afghanistan to facilitate the U.S. withdrawal from the country,” said Abdul Sayed, an independent researcher on jihadism based in Sweden.

Experts believe the deal stuck with the U.S. in February 2020 has not altered the relationship between al-Qaida and the Taliban. Since then, several high-profile al-Qaida leaders — including Husam Abd al-Rauf, a senior Egyptian al-Qaida’s leader; Muhammad Hanif, AQIS’s deputy chief; and Dawlat Bek Tajiki, a top al-Qaida operative — were killed in Taliban-controlled areas in Afghanistan, indicating that the Taliban still hosts the group’s leaders and fighters.

AQIS publications declare the news of the U.S. withdrawal from Afghanistan a “magnificent victory.”

To make the Taliban powerful enough to challenge the Kabul government, al-Qaida has successfully set up a transnational jihadi military unit by integrating regional jihadist groups, such as the ETIM, the TTP and Jamaat Ansarullah, Hotak said.

Officials in Kabul say the alliance of transnational militants has helped the Taliban cement their territorial gains. “Highly trained members of al-Qaida or its allied groups embed with Taliban units to act as military advisers in key operations, and train them in planting explosives and other types of makeshift mines,” the Defense Ministry official said. “Most of the foreign fighters are the children of those militants who fled their countries after their governments launched crackdowns on them.” People believed to be militants are seen in a pickup truck mounted with a gun in Afghanistan. (Still image obtained from a video posted by the Afghan Defense Ministry on its Facebook page)   © Reuters

Sayed said communications from the Taliban leadership to al-Qaida and its allies show that to secure its future international interests, the Taliban has no intention of cutting ties with foreign militants, nor plans to expel them from Afghan soil. “The Taliban knows that it can trade these liabilities of the past for its strategic goals in the future.”

A U.N. Security Council report on July 21 report noted that “several hundred ETIM militants are active in several Afghan provinces,” mainly in Badakhshan, which borders Tajikistan and Pakistan, and adjoins China’s Xinjiang Province via the narrow Wakhan Corridor. Their focus is “primarily on actions targeting China.” A recently released ETIM propaganda video shows the group training with weapons in Badakhshan to demonstrate the combat readiness of the group, the report said.

On July 29, Chinese Foreign Minister Wang Yi asked a top-level Taliban delegation visiting the Chinese city of Tianjin to cut ties with ETIM and other groups, which have sanctuaries in various parts of Afghanistan.

The Taliban delegation’s visit followed the visit by Pakistan’s Foreign Minister Shah Mahmood Qureshi. Officials in Islamabad privy to developments told Nikkei that Beijing conveyed the message to the Taliban in the wake of the July 14 terrorist attack that killed nine Chinese engineers who were working on a hydroelectric project in Pakistan’s Kohistan district.

Lockdown Lowdown: Somwaraporn Pichitpongchai on starting her accessories brand amidst a pandemic