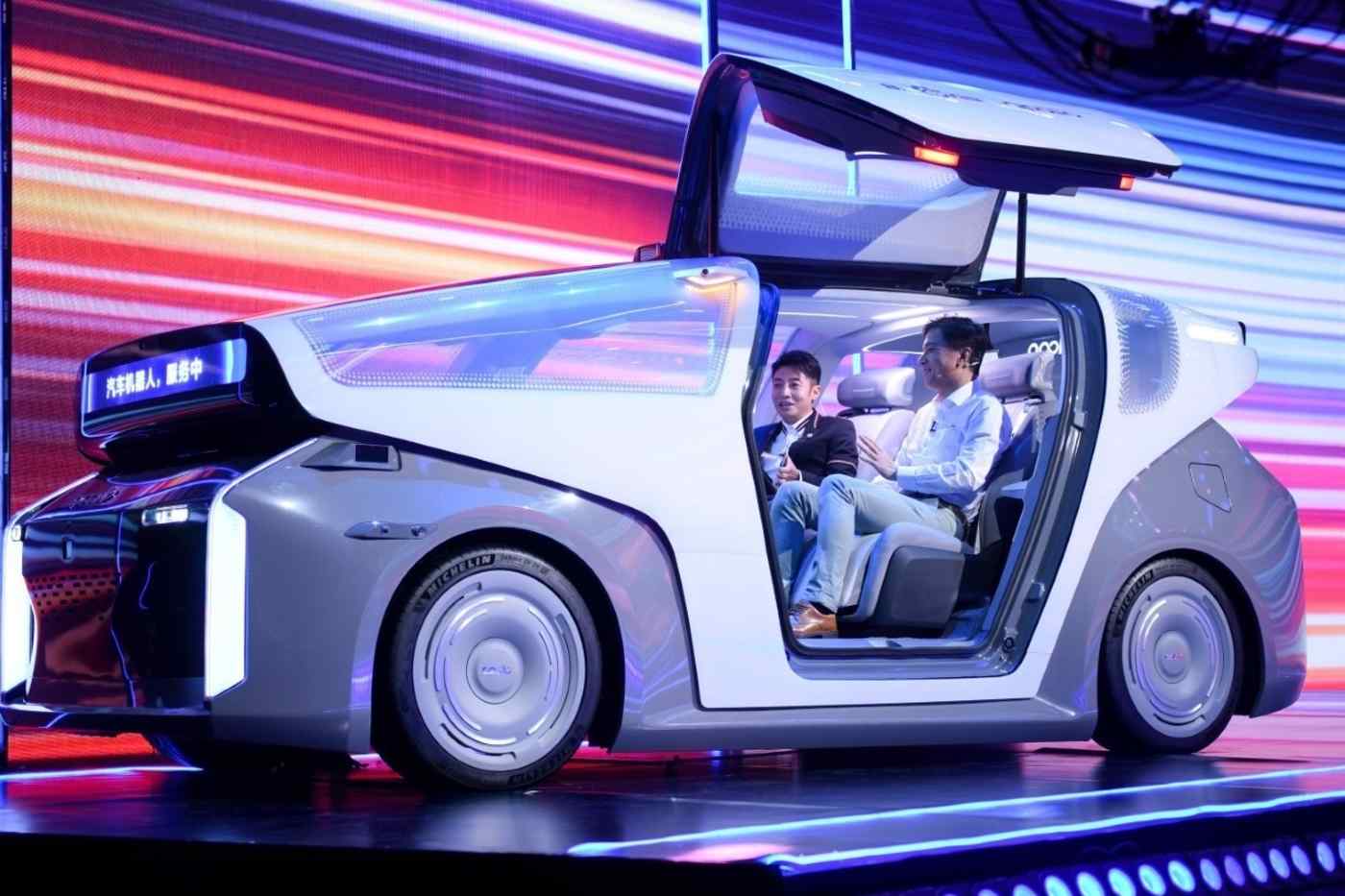 The joint-venture plan is to unveil a concept at the Beijing Auto Show in April 2022 and start taking orders as early as later that year.

BEIJING — The vehicle has no steering wheel nor a gas or brake pedal, but the AI-loaded concept dubbed “robocar” unveiled Wednesday by Baidu, the Chinese company best known for its search engine, showcases its advances in an eight-year effort to develop autonomous-driving technology.

The debut of the futuristic car coincides with Baidu’s renewed push to produce electric vehicles through a joint venture with automaker Geely.

“We believe that cars of the future will be robocars,” Baidu CEO and Chairman Robin Li told an online audience. The car’s artificial intelligence capabilities allow it to drive as the user sees fit, according to the company.

Baidu did not mention the timeline for bringing the two-seater robocar to the market, describing it as a vehicle of the future.

But the tech company aspires soon to call itself an electric-car manufacturer. Its ambitious plan is supported by a strategic tie-up with Zhejiang Geely Holding Group, China’s leading private-sector automotive group.

Their electric-vehicle joint venture Jidu Auto, 55%-owned by Baidu, intends to invest 50 billion yuan ($7.71 billion) over the next five years to build and sell EVs featuring autonomous-driving technology. The plan is to unveil a concept at the Beijing Auto Show in April 2022 and start taking orders as early as later that year. Jidu is expected to tap Geely’s EV platform and its factories.

Baidu began developing autonomous driving tech in 2013, ahead of its competitors, and in 2017, it launched the Apollo open-source self-driving development platform. The platform has attracted Chinese government support as well as powerful partners like Toyota Motor and Volkswagen, along with tech companies Intel and Nvidia.

But Apollo’s use thus far is hardly dominating China’s market, spurring Baidu to pursue the next step of producing and selling EVs itself by joining hands with Geely.

Chinese players are achieving “rapid growth” in self-driving technology, according to an executive at a Japanese automaker, and are on track to catch up with their U.S. rivals. Baidu logged over 1 million km in self-driving public road tests last year, comparable to General Motors-backed Cruise and Waymo, a subsidiary of Google parent Alphabet.

What is more, Baidu is rolling out a robotaxi service, with its fleet debuting on limited roads in Beijing, Guangzhou, Changsha and Changzhou before expanding to 30 cities in three years. Reservations for the self-driving ride service are now made on an existing map app, but the company has announced plans to launch its own dedicated app.

Baidu is accelerating its autonomous driving push because of a slowdown in its core search-engine business. It generates about 60% of its sales through online advertising, which in 2020 translated to 107 billion yuan in total revenue — slightly down from the previous year’s 107.4 billion yuan.

In terms of earnings and market value, Baidu has fallen far behind tech giant rivals Alibaba Group Holding and Tencent Holdings. Meanwhile, the self-driving and EV race is intensifying, with smartphone maker Xiaomi joining the field and Didi doubling down on robotaxis. Baidu faces a stern challenge from these and other later entrants.