Afghanistan collapse a failure of execution, not strategy

Ian Bremmer is the president of Eurasia Group and GZERO Media and author of “Us vs. Them: The Failure of Globalism.”

The botched withdrawal from Afghanistan is the first major foreign policy crisis of the Biden administration. The decision to withdraw is not to blame.

This was a failure of execution rather than strategy. The American presence was increasingly unsustainable. The U.S. had already withdrawn a significant number of troops, the Taliban were rapidly gaining territory, and few Americans cared anymore.

President Joe Biden inherited a broken peace process and the prospect of a renewed conflict with a strengthened Taliban if he reneged on predecessor Donald Trump’s commitments. Continuing the fight would have required a military surge that no one in Biden’s cabinet, least of all the president, was willing to support. Withdrawal was the best of truly bad options. Biden has strong convictions on this, which came through in his address to the nation on Monday.

What was surprising — and frankly shocking, given the expertise and experience of the national security and foreign policy team Biden has assembled — was the sheer incompetence of the execution. There were four main failures.

Firstly, military and intelligence failure. U.S. intelligence agencies thought Kabul could hold off the Taliban for two to three years. Once the Taliban’s offensive kicked into high gear, the intelligence assessment dropped to two to three days. Two facts here are truly staggering: The U.S. spent 20 years and $88 billion training an Afghan force that refused to fight, and after 20 years of personally training Afghans, the U.S. still did not understand, or did not want to understand, their true capabilities and will to fight. 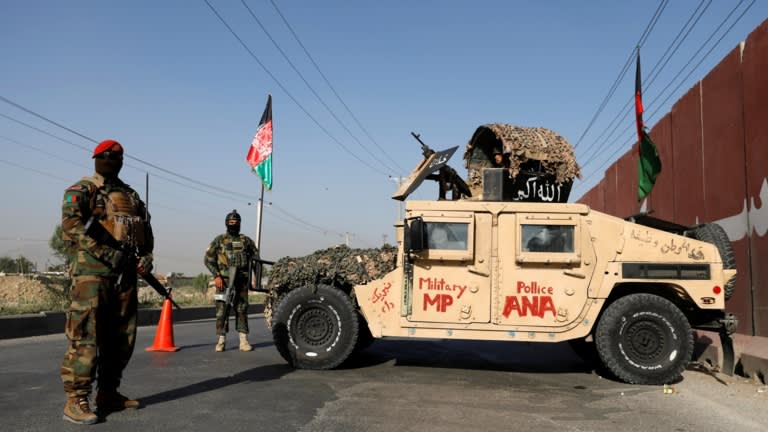 Afghan National Army officers keep watch at a checkpoint in Kabul on July 8: the U.S. spent 20 years and $88 billion training an Afghan force that refused to fight.   © Reuters

Secondly, coordination failure. The U.S. fought alongside allies for two decades, but when the time came to pull the plug, Biden did so alone both in terms of the policy review — the decision, the announcement, the execution — and the aftermath, including evacuating citizens, accepting refugees, providing humanitarian support and so on. U.S. allies expected a different American attitude toward its friends, following four years of Trump’s “America First.”

Aside from allies, the U.S. also passed on the opportunity to engage with China. Neither country wanted Afghanistan to collapse into a failed state or to once again export international terrorism. There was room for creative diplomacy on one of the few areas where the Chinese and Americans actually agree, but the chance was wasted.

Thirdly, planning failure. Getting the intelligence and the coordination wrong did not have to spell disaster had the Biden administration effectively planned for alternative scenarios. But based on everything we know, the administration did not. The U.S. had to airlift troops in from the mainland to assist in the evacuation, sending in 3,500 more than it had withdrawn in the first place. The Kabul airport was overrun with desperate Afghan civilians.

A U.S. transport plane evacuated with thousands of Afghans running alongside it, and three stowaways fell to their deaths after the plane took off. The planning to provide safety for thousands of Afghans who had helped American forces was nonexistent, and many will be left behind.

Finally, communications failure. In selling withdrawal, Biden weeks ago assured Americans that it was “highly unlikely” for the Taliban to be “overrunning everything and owning the whole country.” He insisted that “there’s going to be no circumstance where you see people being lifted off the roof” of the U.S. Embassy. Secretary of State Antony Blinken said: “We are staying, the embassy is staying, our programs are staying. If there is a significant deterioration in security, I do not think it’s going to be something that happens from a Friday to a Monday.”

As these predictions unraveled in real time, the administration pivoted to insisting that “we have succeeded” in Afghanistan. What should have been a tough but necessary decision became a debacle, opening Biden to charges from political opponents that he is personally responsible for the failed war — a ludicrous charge for a 20-year, $2 trillion failure, but one he now partially owns.

The next few days will be crucial. The Kabul government has fallen and now-former President Ashraf Ghani has fled into exile, but many Americans and foreigners are still stuck in the capital, with thousands of U.S. troops on their way to help evacuate them. Will the Taliban try to kidnap or kill Americans as they leave? Will the chaos lead to accidents and deaths of American journalists, aid workers, diplomats or soldiers?

The White House is staring down a number of worst-case scenarios reminiscent of the Tehran hostage crisis in 1979 and the failed Iran hostage rescue in 1980. We will know in short order whether Kabul 2021 will be added to the list.

Even if Biden avoids further catastrophe, the optics from the coming weeks will be staggeringly bad. The Taliban will enjoy the propaganda coup of raising their flag above Kabul, including in the former American Embassy, on the 20th anniversary of the Sept. 11 terrorist attacks.

Billions of dollars of military materiel abandoned by the Americans will be paraded through the capital. Taliban forces will establish their rule with atrocities, especially against women and girls. The U.S. media is unlikely to let this go, especially if, as is likely, some are caught up in it. Congress will hold hearings and interrogate senior administration officials as to what happened.

Afghanistan will once again serve as a safe haven for international terrorism either because the Taliban directly welcome extremist groups or, more likely, because they will not be able to control their territory. Conflict zones are magnets for jihadis from around the world, as demonstrated by Afghanistan in the 1980s, Bosnia in the 1990s, Iraq in the 2000s and Syria in the 2010s. The wave of ISIS terrorism in Europe was enabled by the organization’s ability to recruit extremists from across the world, train them in Syria and Iraq, and deploy them back to their home countries.

The American ability to monitor and strike against terrorist groups in Afghanistan will be limited given the absence of on-the-ground intelligence and the limitations of regional military capacity. The “known unknowns” about Afghanistan will skyrocket in the coming years. That alone is bad news for America.

At least 34 dead after floods in north India

Ad spends predicted to dive by 2.7% in 2021 driven by extended virus-induced economic disruption