NEW DELHI — The aftermath of the deadly blasts outside Kabul airport was “like a horror movie,” according to one person who saw it and survived.

“There were dead bodies and severed limbs everywhere,” said the witness, a senior official for the former Afghan government who asked not to be named for security reasons. “People were crying, looking for lost family members, screaming for help, stepping over one another.”

A short video he sent to Nikkei Asia showed people wailing as they walked around piles of bloodstained corpses.

The two explosions on Thursday claimed 85 lives — 72 Afghan civilians and 13 U.S. soldiers. They underlined the deadly risks to Afghans fleeing to evacuation flights after the Taliban took over the capital on August 15, and to the foreign troops facilitating the massive airlift.

The killings, for which the ISIS-K terror group has claimed responsibility, have stoked renewed criticism of U.S. President Joe Biden’s strategy to withdraw from Afghanistan.

The ex-official interviewed by Nikkei Asia was one of the thousands of people who came to the airport gates with a pass, but not full permission, for a U.S. evacuation flight. He asked not to be identified because he fears Taliban retribution over his work in the transport sector with the American forces now pulling out after the 20-year occupation.

The man said he was just steps away from freedom and safety when the blast happened. He not only got separated from his family members in the commotion, but also lost all hope of safely exiting the country, he added.

He said he received an email alert two days before the blasts urging him to avoid the airport, but when nothing happened over the next 48 hours, he and five family members decided to make the trip. His story is consistent with other accounts of the blast and the evacuation procedures.

The airport bombs came hours after the world’s governments alerted their citizens to avoid the airport due to an impending threat of an attack by ISIS-K, the Af-Pak branch of the Islamic State. 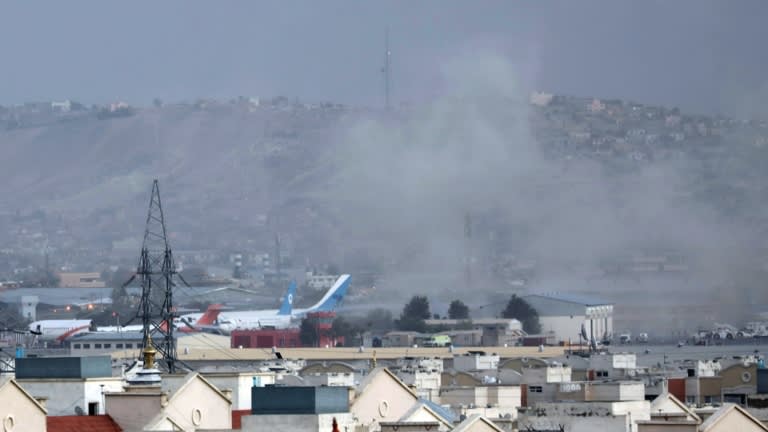 Smoke rises from a deadly explosion outside the airport in Kabul on Thursday.   © AP

According to the Pentagon Spokesperson John Kirby, the first blast happened near the airport entrance, while the second one was near a hotel.

The Afghan ex-official interviewed by Nikkei said he and his family arrived a couple of hours before allotted time of 3:30 p.m. on his pass. He left them about 200 meters from the gate and told them to wait while he tried to gain entry, but the crowds were so thick that he went back to his family. “I felt so hopeless, and that I would die trying to get in,” he said.

That was when the bomb exploded. People started running in all directions, he said, adding that he was with his wife but couldn’t find their four-year-old son. Ultimately none of his family were hurt and they reunited at home. “My son did not say a word after coming home. We were shaking all day.”

The former official said he had applied for a special immigrant visa for Afghan nationals few days earlier. And while his application was still being processed, he used connections at the airport and with U.S. soldiers to get the coveted gate pass. “They said just reach the airport once, and we will transfer you to Virginia until your SIV is being processed.”

The attack came amid evacuation efforts by western troops ahead of their August 31 deadline of a complete American withdrawal.

Joe Biden condemned the blasts, adding that the U.S. would not stop their evacuation mission. “To those that carried out this attack, as well as anyone else who wishes America harm know this: we will not forgive,” he said in a statement. “We will not forget. We will hunt you down and make you pay.”